The Young and the Feckless 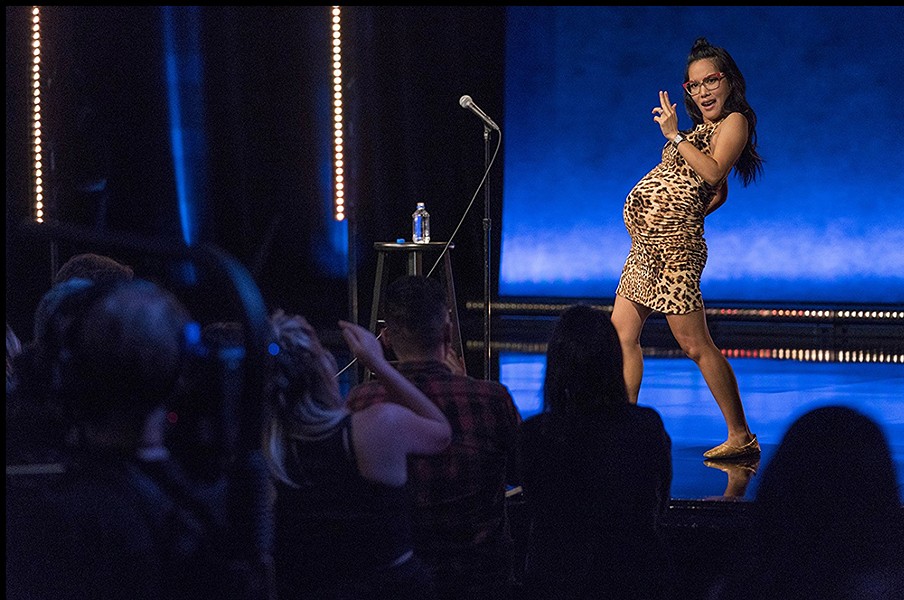 Ali Wong: Hard Knock Wife Me using all the words for lady parts.

In back-to-back news cycles swirling with tenuous international political relationships, a reported death toll of nearly 5,000 Americans in the wake of Hurricane Maria and an investigation into whether Donald Trump's campaign colluded with Russia, it might surprise the casual observer that the jokes and comments of a handful of female comedians have garnered so much media coverage and collective political outrage. And yet three very different instances — Michelle Wolf's White House Correspondents Dinner jokes about Sarah Huckabee Sanders, the racist tweet that cost Roseanne Barr a prime-time sitcom and Samantha Bee lobbing a C-bomb at Ivanka Trump — have sucked up a lot of oxygen.

It's been frustrating/amusing/terrifying to watch the comments of a longtime demonstrative racist like Barr equated with harsh criticism (body shaming if you squint) and foul language. Scrambling to find pearls left to clutch in 2018 over a female comedian saying something crude or mean is no easy thing. Since we're all suddenly paying attention to what women are saying (ha ha, ha ... *weeps softly), now might be a fine time to check out three new Netflix offerings from funny ladies. It's far more relaxing than watching pundits freak out about them in split-screen commentary.

THE BREAK WITH MICHELLE WOLF. Michelle Wolf's weekly half-hour show sticks to a late-night format in the sense that there is an opening monologue, a desk, a couch and a DJ who laughs at everything, but with a little more freedom. "We will joke about whatever we want," says Wolf, adding, "Seriously. We're on Netflix, we don't have any sponsors." Instead there are parody ads, skits, lots of sharp current events stuff and guest comics. And while she announces no Colbert-esque lessons will be taught, her commentary, previously featured in her work on the Daily Show, cuts to political and social issues.

It's worth noting that among the aforementioned comics, Wolf is the only one who did not apologize. In fact, she doubles down in the first episode, going in on Sanders' "ugly personality" in a segment about not supporting awful women just because they are women, and reveling in dubious license to body shame disgraced celebrity chef Mario Batali because he's heinous enough that nobody will come to his defense.

A spoof trailer is goofy and physical skit work that showcases the best of what Wolf does, which is to pare down a trope or a conflict joke by joke to show the ridiculousness of its premise, be it a flimsy Hollywood cliché or indignation over kneeling football players. TV-MA. 30m.

TIG NOTARO HAPPY TO BE HERE. Tig Notaro's decades-long career in comedy has spanned writing, acting, standup and even a documentary, all without raising her voice very much. Her new hour-long special has the self-deprecating comic on a small stage in Houston, exuding the exhausted calm of a parent of twin toddlers. Notaro opens with a couple of stories about being mistaken for a man, a fine introduction to her shrugging, unsurprised storytelling style. There are no outrages or heartbreaks in this show — instead, the banalities of married life with her wife Stephanie, owning a cat and raising twin boys are woven into rambling tales that aren't heading to traditional punchlines. Notaro's gift for turning the fizzling end of a story into something funny by exploring the listener's disappointment is a source of gentle enjoyment. There are stories of jokes that bomb, conversations that go nowhere and unspectacular practical jokes that yield awkward moments rather than shock. We're always braced for the letdown, right up to the teased musical guests. And it's all very, very funny. TV-14. 58m.

ALI WONG: HARD KNOCK WIFE. Wong follows up her previous Netflix hit Baby Cobra, in which the very pregnant comedian told deeply crass jokes that were amped up by her enormous belly, with another show and another baby bump. That extended sight gag has not lost its punch as the diminutive comic describes being a stay-at-home mom as "a wack-ass job" and rages at the physical indignities of diaper changing, breastfeeding and living in a post-partum body. Perhaps the polar opposite of Notaro, Wong growls and shouts, jabbing her finger and alternately scrunching her face and popping her eyes behind her cat-eye glasses. She delivers pronouncements about motherhood, work and Asian American family life like secrets finally revealed, shamelessly sharing resentments, embarrassments and selfish desires. Neither her material about sex nor childbirth are recommended for anyone who's trying to maintain the mysteries of womanhood or lady parts. TV-MA. 64m.

HEREDITARY. Toni Collette and Gabriel Byrne star in a trippy horror movie about a haunted family tree and a disturbed child. I think — the trailer is too scary to watch. R. 127m. FORTUNA, MINOR.

ADRIFT. A couple (Shailene Woodley, Sam Claflin) sailing across the ocean get caught in a massive hurricane and I don't think fitting on a door together is going to save them. PG13. BROADWAY, MILL CREEK.

DEADPOOL 2. Ryan Reynolds in his destined role with a better story, action and jokes. It's almost fun, kind and rough enough to make you forget it's spawn of the Marvel juggernaut. R. 113m. BROADWAY, FORTUNA, MILL CREEK, MINOR.

A QUIET PLACE. This effective horror about a family surviving amid creatures that hunt by sound achieves emotional authenticity about trauma and isolation. PG13. 90M. BROADWAY.