Crossing the Vortex at Dell'Arte 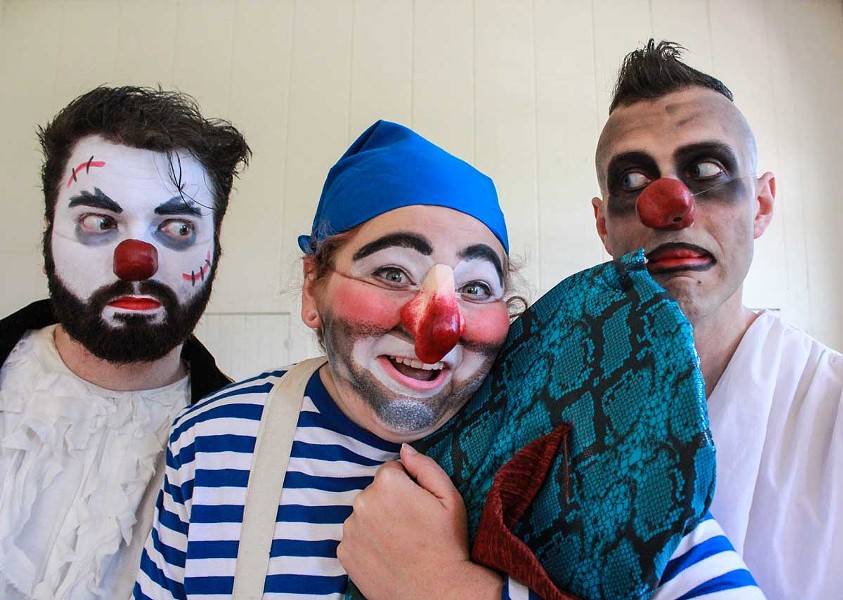 May is always an exciting month at Dell'Arte. It's when the multinational class of graduating students stages its final ensemble creations — the culmination of the school's three-year MFA program. Each of this year's thesis pieces has been written, performed and directed by the students and brings together Dell'Arte's signature theater of place with their own cultural backgrounds. It's a heady mix and produces some thought-provoking work.

This year's productions more than meet those standards, combining fun with philosophical challenges across a broad landscape of fantasy and culturally relevant content. Here's just a taste of what you can expect from each of the approximately 45-minute long performances:

The Hempen Jig takes us on a strange voyage with a trio of pirates who seem to have lost half their minds as well as half their ship. What remains of the skeletal vessel includes a large barrel, the alcoholic contents of which seem to have been fully absorbed by the crew. A stray hunk of stale bread becomes the centerpiece of an elaborate and fantastical tea party, while a mysterious sea monster snakes out of the depths to join the fun. Lanny (a wonderfully exuberant Gabriela Haught) falls madly in love with the monster's tentacle, names it Felicity and gives it flowers. But Jib (Chase Perkins, resplendently reptilian as he pole-dances up and down the mast in fur and shimmering blue) and Captain (Jacob Timmons, the essence of discombobulation and somewhat disadvantaged by having two hooks for hands) attempt to slay the beast and save them all from a watery grave. Will love or life triumph? And will the captain go down with his ship?

Cluck, Boom, Bloom explores the potential impact of the biological clock on the world of a rotund red hen (Gaia Mencagli in her most absurdist performance yet), an agile, spirited but often disappointed sparkly pink sperm (the always energetic and smile-inducing Fay Steddum), and a cryptic mouse-like creature (an enigmatic but clearly friendly Matilda Lindström). Egg laying is clearly coming to an end for the flatulent, popcorn-loving hen — a good egg is followed by a bad egg and then ... no egg at all? What will the sperm do then? The hen wants to lay (and eat popcorn) and the sperm wants to fertilize, but what does the mouse creature want? Opinions varied widely among the audience members I quizzed — take along an inquiring mind. This piece raises questions about what fertility means, how we value it, how much it can be controlled and how much is simply a randomized luck of the draw — not to mention the morality of chickens as food-production machines.

Singularity is billed as an "Afro-futuristic drama" that takes place on a far-off planet populated by the descendants of an African diaspora from Earth. The scenery and staging clearly draw heavily on 2001: A Space Odyssey but with strong African overtones, as an exiled warrior (Isaiah Alexander in a tightly drawn portrayal of a powerful mentor/defender) joins forces with his former protegée (an energetic and dynamic Natashia Marshall). In their battle against a threatened alien invasion, they must draw on the wisdom of their ancestors, as well as their advanced technological skills. But can they muster the strength to make the ultimate sacrifice that may save their world? There's an interesting level of allegory with today's historical/political environment that brought to my mind that prescient last line from The Nice's seminal 1968 recording of Leonard Bernstein's classic: "America is pregnant with promise and anticipation/ but is murdered by the hand of the inevitable."

#Anomie is a social justice fable for the #MeToo era. It's staged as a look back at 2018 from some indeterminate time in the future and narrated as an open-mic session by a detached guitarist/emcee (a haunted and monotonal Andre LaRocque). The play is a brutally honest examination of what can happen when social justice warrior John (David Powell in an over-the-top performance that recalls Sir Ian McKellen at his most self-mocking pomposity) forgets that those he believes he is trying to help are real people with real feelings and real lives. The object (victim?) of his campaign, the closeted Craig (a nuanced, controlled, yet ultimately tragic portrayal by Jeremy Webb) tries in vain to communicate to John that he is not ready to be the poster child for a prototypical men's liberation movement, while co-emcee and proponent of women's rights Olive (a sympathetic, protective Elizabeth Hedlund) attempts in vain to explain to John the selfishness of his actions.

Also featured in this year's thesis festival is Let Me Out!, an immersive memory experience that will play to select audiences on May 22-23 at 8 p.m. and May 26-27 at 2 p.m. Check www.northcoastjournal.com for more on this unique marriage of theater and role-playing games, in which audience members will be invited to leave the real world behind and step into an imaginative playground where the boundary between audience and performer does not exist and everyone has a role to play.

Crossing The Vortex: Thesis Festival 2018 runs Thursday through Sunday, May 24-27 at 8 p.m. The Hempen Jig and Cluck, Boom, Bloom! play on Thursday and Saturday. #Anomie and Singularity play on Friday and Sunday. All performances are all pay-what-you-can, with reservations highly encouraged. Call 668-5663 or visit www.dellarte.com. For information on attending Let Me Out! visit www.facebook.com/letmeoutplay.

Chicago brings criminal celebrity and fringe-shaking numbers to the Ferndale Repertory Theatre in Ferndale on Fridays and Saturdays at 8 p.m. through June 2, with Sunday matinees at 2 p.m. through June 3. For more information, call 786-5483 or visit www.ferndalerep.com.

A lush and engaging production of New Orleans drama (human and supernatural) The House that Will Not Stand plays at Redwood Curtain Theatre on Thursday, Friday and Saturday nights at 8 p.m. through May 26. Call 443-7688 or visit www.redwoodcurtain.org.

Adding another weekend after canceled performances last week, the rocking Hedwig and the Angry Inch plays at the North Coast Repertory Theatre on Fridays and Saturdays at 8 p.m. through June 16 and also Thursday, June 14, with Sunday matinees at 2 p.m. Call 442-NCRT or visit www.ncrt.net.