They Came for My Compost

But they'll pry my pitchfork from my cold, dead, worm-eaten hands 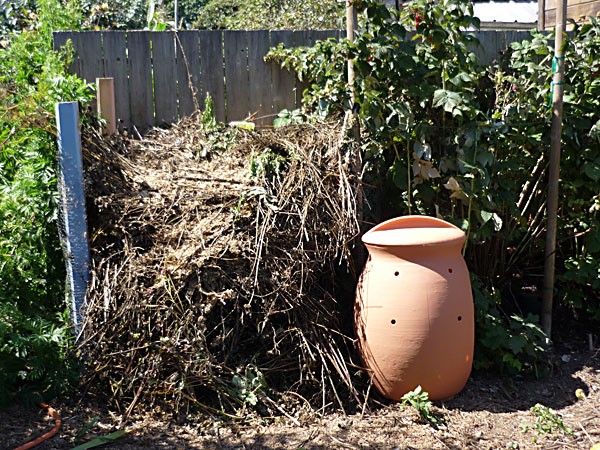 There's a great Penn & Teller segment about recycling that ran on their "Bullshit!" series on Showtime a few years ago. (If you were reading this on the magical digital paper of the future, this video clip would materialize right about now and you'd watch it without getting out of your chair. As it is, you'll have to pick up your phone or your iPod or your toaster or whatever it is you watch videos on these days and track it down on YouTube. Just type in Penn, Teller, and recycling.)

The message behind this particular segment -- that recycling doesn't really do all that much good and may well consume more resources than it saves -- is certainly debatable, and Penn and Teller have gotten some well-deserved criticism for their cherry-picking of the facts.

But the video itself is a brilliant piece of comedy. A man posing as a city staffer brings a series of wheeled bins out and asks unsuspecting homeowners whether they'd be willing to try out some new sorting rules to help improve the city's recycling rate. These are good people who want to do the right thing, and as each bin comes off the truck, they nod and agree to give it a try. A separate bin for colored as opposed to white paper? Sure, that sounds easy. Separating metal cans with labels from those without? Well, why not?

The purple bin comes off the truck. It's for plastics that have come in contact with food. Then the yellow bin, which is just for food scraps. Then comes the bin for "lightly soiled toilet paper," and finally the bin for "biohazardous products" like diapers, feminine hygiene products and dead animals.

Pretty soon there are eight bins on the sidewalk, stretching the entire length of the house. It's absurd, and I don't care how enthusiastic a recycler you are -- you'll laugh at the sight of all those bins. Those of us in Eureka who are struggling to make room for our gigantic new blue recycling bins on whatever narrow little strip of cement we have for storing such things can probably relate. I've got a green waste bin for the bulkiest of my garden waste, a recycling bin and the smallest possible garbage can, and I may have to pour a new walkway to make room for it all.

Which brings me to San Francisco's new mandatory compost program. While much has been made of the fines associated with failure to comply -- suggesting that anyone who tosses kitty litter or cooking oil into their green bin will be ticketed -- the fact is that all San Francisco has really done is to offer universal garbage service. Everyone gets three bins -- one for garbage, one for recycling, and one for green waste and some "soiled paper" items like coffee filters and milk cartons. That stuff gets hauled to Vacaville and turned into compost. The only complaints seem to be coming from those who are already composting and don't have a need for a green bin. And I have to agree with them: As a gardener, I wonder why anyone would put perfectly good organic matter into a city-issued bin and have it hauled away when they can make compost themselves.

Now, I can understand why a city dweller with little or no outdoor space might prefer to have their compostable green waste hauled off so that someone else can make use of it. Of course, even someone who lives in an apartment could put a worm bin under the sink and feed most of their coffee grounds and banana peels to the red wigglers. But I don't actually expect most Americans, no matter how well-intentioned and Earth-friendly they are, to tend a small herd of worms in the kitchen.

But for people who have even a small backyard -- even a patio with a modest little strip of ground around it -- I wonder: Why bother hauling compostables out to the curb? Could anything be easier than dumping kitchen scraps and green waste in a pile and letting it rot? And if you break one of the composting rules and toss something non-compostable onto your own pile -- well, you'll suffer the consequences soon enough and take corrective actions. No fines required.

So in the unlikely event that you're not already composting in your own backyard, I'd like to suggest three approaches you might consider before San Francisco's model goes statewide:

Put it in a pile and let it rot. This is my preferred method because it requires absolutely no work -- the pile shrinks as it breaks down, attracts an interesting but unobtrusive population of bugs, and yields a few wheelbarrows' worth of compost once a year when I turn it over. Just remember that big, bulky stuff like tree branches aren't going to break down anytime soon. Also, weeds and diseased leaves may flourish and spread in your compost pile, so toss those in a green waste bin instead. Apart from that, it'll all break down eventually. If you've got a good-sized yard, you can probably spare a corner for a nice, messy pile.

Dig a hole. This is especially effective for people who live in a small space and produce kitchen scraps but not much yard waste. Go out once every three months or so and dig a hole at least 18 inches deep in a spot that's easy to get to but won't get tripped over. Dump your veggie scraps in the hole. Sprinkle a little dirt on top if the sight of it offends you, but it probably won't -- the scraps will break down surprisingly fast. When it's full, dig another hole somewhere else, and use the dirt from that hole to cover the one that's now full. Each one of these spots will make a great place to plant vegetables or annual flowers the following year -- and you're putting nutrients below ground, where plant roots need them most.

Buy a really cool-looking compost bin. Those were low-maintenance options; this is the high-maintenance option. If your patio or garden is far too beautiful for piles of rotting waste or muck-filled holes, go shopping. Algreen Products makes a curvy compost bin that looks like a giant terra cotta pot, and while they're pricey -- usually a couple hundred bucks -- it's the price you pay for beauty. Or if you're lucky enough to have a woodworker in the house, tell him or her to build you a box with a hinged front door (so you can open it once a year and pull compost out) and a lid that opens easily (for adding new green waste). You can paint it, put some trim on it, or instruct said woodworker to make it match your carriage house or your chicken coop. Just be sure it gets plenty of ventilation and drainage, and beyond that, it can be as decorative as you'd like it to be. And the compost is delicious. Bon appetit.