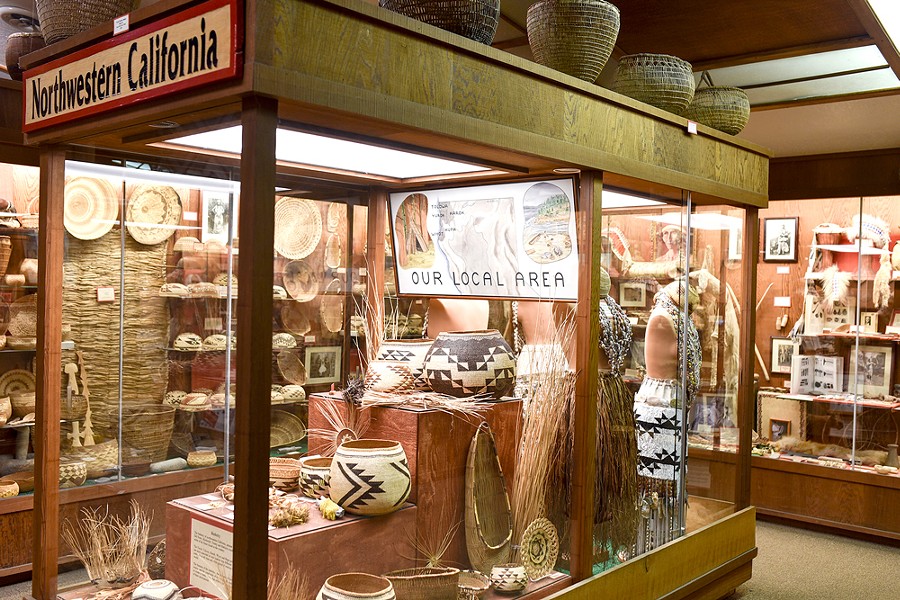 Small museums and private institutions that accept federal CARES Act money or other stimulus funds could be forced to relinquish thousands of Indigenous items and ancestral remains now in their collections.

Under the Native American Grave Protection and Repatriation Act of 1990, museums or other institutions that accept federal funding must compile an inventory of Indigenous cultural items and initiate repatriation of the collections and remains to tribes or family members.

At least two museums are now facing possible scrutiny — the nonprofit Favell Museum of Native American Artifacts and Contemporary Western Art in Klamath Falls, Oregon, and the End of the Trail Museum, which is connected to the Trees of Mystery gift shop in the redwood forest in Klamath.

Hundreds of other small museums and institutions could also face scrutiny of their Indigenous collections if they have accepted federal funds.

"This will likely have an impact on private collections that previously did not have NAGPRA obligations," Melanie O'Brien, manager for the national NAGPRA program, wrote in an email to Indian Country Today.

Museum representatives did not respond to requests for comment from Indian Country Today.

California Assemblymember James C. Ramos, a citizen of the San Manuel Band of Mission Indians and the first Native American elected to the state's Legislature, said institutions should step up and comply with NAGPRA.

"If these museums across the state and nation received federal funding in the form of the CARES Act, maybe now is the opportunity for those items to be given back to Indian peoples," Ramos said.

The CARES Act — the Coronavirus Aid, Relief and Economic Security Act — was signed into law in March of 2020, providing $2.2 trillion in stimulus funds to families, expansion of unemployment benefits and loans to small businesses, corporations and state and local governments.

A subsequent law, the American Rescue Plan Act of 2021, invested $200 million in pandemic funding for libraries and museums, including nearly $24 million in California, $19 million in Texas and $14 million in Florida, according to the Institute of Museum and Library Services.

Data provided by the NAGPRA office in Washington, D.C., indicate the Favell Museum received two loans from the U.S. Small Business Administration to "aid small businesses in maintaining a work force during the COVID-19 pandemic."

As of May 11, the museum's website stated that it "receives no government funds and little money from grants."

Founded by Klamath Falls businessman Eugene "Gene" Favell and his wife, Winifred, the museum opened in 1972 with the family's private collection of artifacts, including Indigenous baskets collected by Favell's mother, Ruth.

Today, the museum is home to more than 100,000 Native artifacts, including a fire opal arrowhead from Nevada's Black Rock Desert, along with other arrowheads, obsidian knives, Native clothing, stone tools, beadwork, baskets and pottery, according to the museum website. It also houses a collection of contemporary Western artists, including an original painting by Charles M. Russell, and century-old photos of Native people from Edward Curtis.

It is not known to have any human remains, as are found in holdings of other museums. But information presented on the Favell website implies cultures represented at the museum from throughout the Americas are now extinct.

According to the museum's collections page, "The collections on display give the visitor a suggestion of the richness and variety of societies no longer here and they illustrate how creative and adaptive the Native people were." Some of the living tribes and cultures referred to in the past tense are the Chumash, Klamath, Modoc, Apache, Washoe, Pomo and Tlingit people.

Favell purchased the fire opal arrowhead and some other artifacts from California dentist H.H. Stuart, another collector, according to the museum website.  Scholar and author Tony Platt said in his book, Grave Matters: Excavating California's Buried Past, that Stuart collected items from hundreds of burial sites, including Yurok graves at O-pyúweg (Big Lagoon) and Wiyot graves at Duluwat (Indian Island).

In a recent interview with Indian Country Today, Platt said that during his last visit to the Favell Museum, he noticed that labels on Stuart's items indicated that the bulk of the collection came from Duluwat and O-pyúweg.

Favell died in 2001 at age 75 but the museum has continued on without him.

A Favell representative responded to a request for comment from Indian Country Today by saying via email that the museum manager was on vacation and that the person who had overseen the collections had retired. A subsequent request has not been answered.

Ted Hernandez, chair of the Wiyot Tribal Council, said the tribe has not received a list of Favell holdings.

"All of our art, they have a spirit and a life and they (the Favell) are not taking care of our ancestors as they should be," he said. "Each basket is a living being. They are too close together in those cases, so they can't breathe."

End of the Trail

About 200 miles southwest of the Favell Museum, the End of the Trail museum operates as part of the Trees of Mystery roadside attraction in Northern California.

Trees of Mystery has received three federal Small Business Administration loans totaling $650,000 related to the pandemic, according to www.usaspending.gov.

On April 28, 2020, and again on Feb. 25, Trees of Mystery received two SBA loans, each for $250,000, to provide help in maintaining a work force during the pandemic. The business also received a $150,000 loan from the SBA on June 11, 2020, to help restore the company to pre-disaster conditions, according to government records.

According to the Trees of Mystery website, the End of the Trail Museum is attached to the gift shop, which provides the only access into the free museum.

The Trees of Mystery attraction on storied U.S. Highway 101 has operated in some form in Klamath, California, since the 1930s. It first opened as a fishing camp and evolved into the Wonderland Redwood Park, the Kingdom of Trees and then the Trees of Mystery. In 1946, Marylee and Ray Thompson purchased the site and began operating the attraction, according to www.roadsideamerica.com.

The attraction features walkways through the redwood trees, a crude carving of "The End of the Trail" statue and a large statue of Paul Bunyon. A newly constructed Redwood Canopy Trail includes a suspended walkway 50 to 100 feet off the ground that winds through the trees. The new canopy trail opened just as the pandemic was forcing shutdowns but has since reopened, according to the website.

The museum opened on March 10, 1968, largely to display items collected by Marylee Thompson.

It is described on the museum's website as "one of the largest privately owned world class museums," and cites "artifacts and history of the First Americans." Photos on the website show display cases filled with basketry, cradle boards, drums, masks, carvings, Native clothing and other items.

A Trees of Mystery representative responded to a request for comment from Indian Country Today by asking that questions be emailed to a museum owner identified only as Debbie. That person has not yet responded to the questions.

The Better Business Bureau lists Trees of Mystery as a sole proprietorship with four employees, though far more workers can be seen there on a typical day. The owner is listed as John Thompson, who has been identified as the son of Marylee and Ray Thompson.

NAGPRA has already hit a number of other museums across the nation, including the Phoebe A. Hearst Museum of Anthropology at the University of California, Berkeley.

The California State Auditor's office conducted an analysis in 2019 of the university system's compliance with the federal NAGPRA law and a state counterpart, known as CalNAGPRA, and found that the university had fallen short of requirements for repatriation of ancestral remains and artifacts.

Berkeley had nearly 500,000 Native American remains and artifacts as of 2019, and had returned only about 20 percent, the auditor's office concluded.

The remains and objects are stored at the Hearst Museum and are not on display. Research on them has stopped, and they are not accessible to the public, students or faculty, university officials told Indian Country Today.

The auditor's office found that the three universities reviewed — the Berkeley, Los Angeles and Davis campuses — needed to do more to comply with NAGPRA.

The Peabody Museum of Archaeology and Ethnology at Harvard University, meanwhile, issued an apology in March over its handling of ancestral remains and funerary objects and pledged to work with tribes to facilitate their returns. The Yale University Peabody Museum of Natural History is also working to repatriate some of its collections.

The state of Mississippi recently returned items to the Chickasaw Nation of Oklahoma. The remains had largely been found during excavations over the past 50 or more years, and more than 1,000 still must be identified and returned to tribes.

And Indiana University also returned more than 700 ancestral remains excavated from the Angel Mounds State Historic Site. The remains had been in the university's Glenn A. Black Laboratory of Archaeology since 1971.

For Ramos, the California assemblymember, repatriation is personal.

Baskets woven by Ramos' great-grandmother and great-great-aunt were recently returned to the San Manuel Band of Mission Indians by a local county museum. During a celebration of Yaamava' — which means "spring" in the Serrano language — they honored the baskets with a ceremony that included Serrano Bighorn sheep and Cahuilla bird songs.

Ramos said the songs that welcomed his elders' baskets home now live inside him and aid in his continuing efforts to bring cultural artifacts home.

"Regaining those baskets opens up advocacy that those items are tied spiritually to a people," he said.

Ramos said some museums don't understand the importance of non-funerary items and do not recognize them as part of the Indigenous cultural identity. Many tribes recognize baskets as relations, he said.

"Different cultures throughout the state of California that weave baskets breathe life into those baskets," he said.

What happens next is unclear.

When asked about possible investigations of museums or institutions that received pandemic funds, O'Brien said her office was unable to comment on the status of any investigations regarding failures to comply with NAGPRA.

Officials with the Wiyot and Hoopa Valley tribes, however, said they had not received any notifications from the Favell or the End of the Trail museums about cultural items contained within the collections.

Hernandez said the Wiyot Tribe is ready to send out a cultural liaison to validate any inventory of items they might receive.

"The museums that have our items and are not taking care of them," he said, "it's a high disrespect to the Native community."

This story was first published by Indian Country Today and is reprinted here with permission.