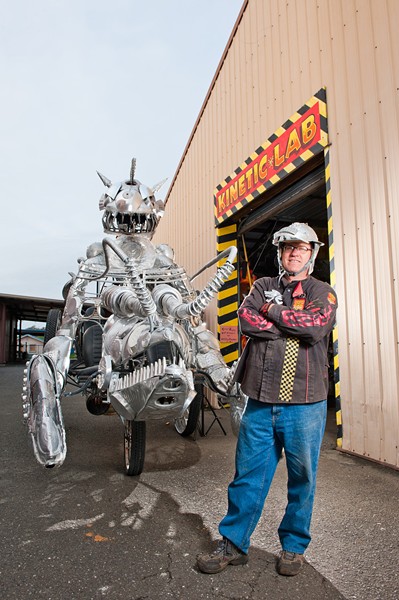 Photo by Muir Adams Flatmo has updated his lobster, complete with fire-breathing demon, for this year's Kinetic Grand Championship. 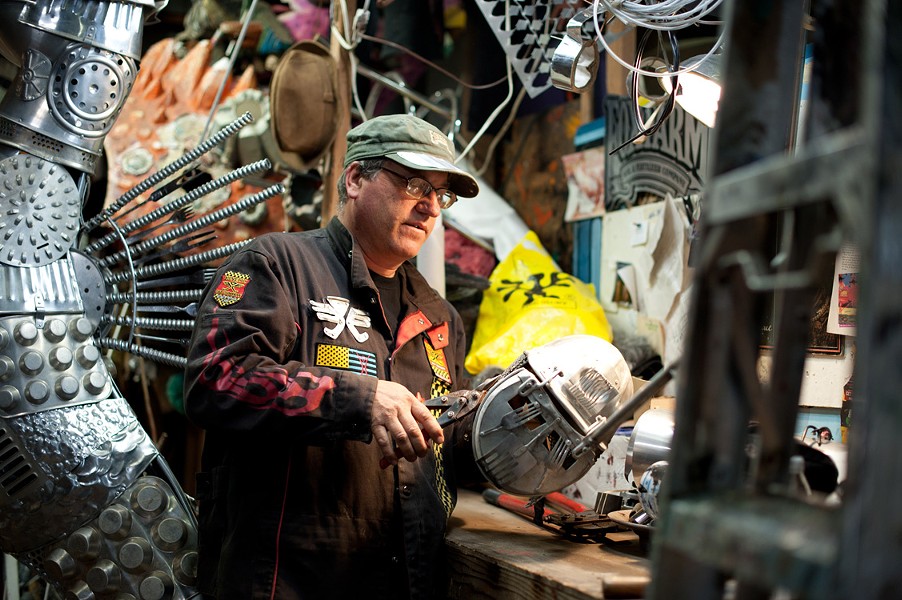 Photo by Muir Adams Flatmo tinkers with his latest creation at The Kinetic Lab in Arcata. 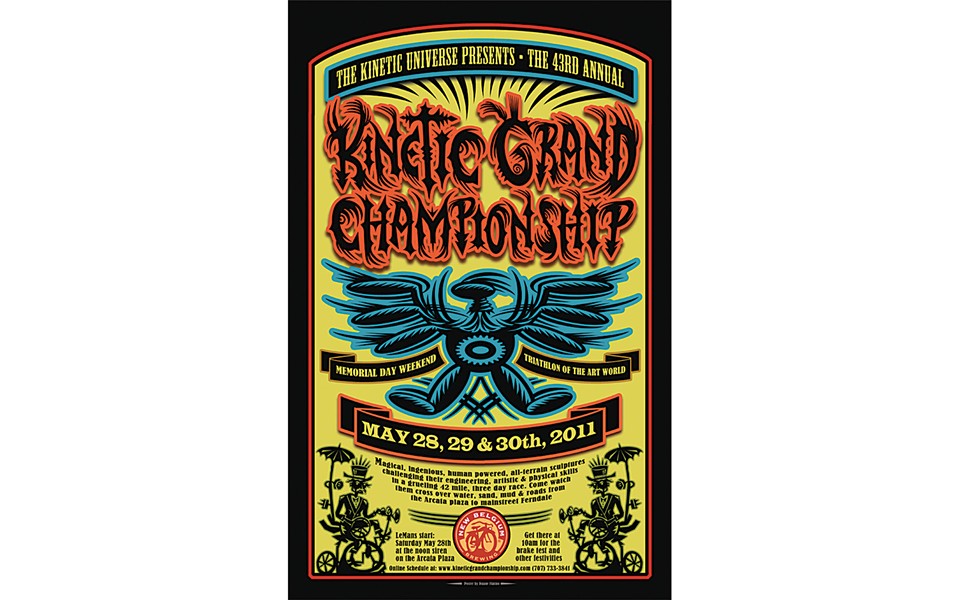 Duane Flatmo plans to bring his giant lobster back to the annual Kinetic Sculpture Race on Memorial Day weekend. It's the same vehicle he raced in 2010, but this time around there'll be a variety of updates, including a fire-breathing monster perched on top of the lobster's back. The machine is an engineering marvel with jaw-dropping aesthetic and kinetic features sure to please the crowds.

Flatmo is celebrating his 30th anniversary with the Kinetic Race this year, and he was in a reflective mood when we talked late in April. "Man, I was just a kid when I started out, 22 years old," he said. "I had a lot to learn."

His first entry in the race, The Pencilhead Express, was a considerably less-sophisticated machine than his giant lobster.

"I flipped the stupid thing over in the water," he recalled. "It was miserable. Everything went to the bottom of the bay -- I lost all my tools, my camping gear. I got soaked and my sleeping bag got soaked. We had to tie a rope to the machine and somehow drag it out of the water upside down and then flip it back over. That wasn't easy, let me tell you. That was definitely my worst day ever in the race."

In spite of such a rough beginning, Flatmo came back and raced the following year and has returned every year since. He spends weeks or months at the Kinetic Lab in Arcata every spring, designing and perfecting his increasingly elaborate vehicles. It's a remarkable expenditure of time and resources for an endeavor that carries very little financial reward.

"It's a good year if a sponsorship pays for the vehicle," he admitted. "We don't usually put money in our pockets." He was quick to point out the non-financial perks associated with the event, like the free rooms at Calistoga spas and the media exposure that led to job commissions and a variety of career opportunities.

"Participating in Junkyard Wars in England and Strange Vehicles in China -- all that stuff was because of the [Kinetic] Race."

Still, Flatmo's a busy guy with a successful art career that keeps him gainfully occupied creating murals, product designs, fine art paintings and sculptures. How does he carve time out of his work schedule to build and race new machines on an annual basis? And, after all these years, what's the motivation?

"I don't really do it for money or perks or trophies or anything like that. That Kinetic motto -- 'For the Glory' -- is overused to death, but that's really what it's about. There are so many levels to 'glory.' The notoriety is one level, having people know who you are and look forward to seeing what you come up with each year, having them say 'ooh' and 'aah' when you unveil your machine, stuff like that."

According to Flatmo, there are many other intangibles that make the event worth doing, including the relationships he's built over the years with fellow race enthusiasts at the Kinetic Lab.

"There are amazing people associated with the race -- Ken Beidleman, especially, is one of the most innovative guys you'll ever meet, anywhere. We all feed off each other's ideas and energy at the lab. People come up with new designs for wheels and stuff, and then we'll see those designs turn up on other people's machines down the road. That's very rewarding."

Flatmo said he also values the relationships he's built with spectators over the years. "You get to know people. You see families with babies and you watch them grow up every year and you know you're influencing them.

"The year I raced Tiki Torture, this kid came up to me and gave me this little replica of my machine that he made out of stuff he found on the beach. He said he watched me race when he was little and I inspired him and now he's racing, too. That was so amazing. I had tears in my eyes."

After 30 years, does the race still provide new creative challenges? "Absolutely," Flatmo said. "It's always about trying to one-up myself every year, trying to make more innovative machines, things nobody else ever thought about. It spills over into the rest of your life, too. All year you're looking around for inspiration. You see a plastic tub, or some kind of tubing somewhere, and you think: How could I use that? Could that be a wheel, or an eyeball?"

There's no question that all this creative juice has crossed over into Flatmo's more commercial work, particularly his art sculptures incorporating found objects and kinetics. On a recent trip to Mexico he created a series of sculptures from items he found on roadsides and beaches and in Mexican hardware stores. One of the sculptures, "El Pulpo," features an octopus with eight reticulated legs that dance and eyeballs that pop in and out.

Flatmo is working on a supersized version of El Pulpo that he plans to take to Burning Man in September. It'll be an enormous machine with a flatbed truck as a base. The project is too large for the Kinetic Lab, so he rented a more spacious warehouse for the construction.

"It'll be a complicated machine with lots of moving parts," he said. "It'll be gas-powered, not kinetic. Oh, and there'll definitely be pyrotechnics." His concept drawing features fire coming out of the top of the octopus' head and shooting out of the legs.

This will be Flatmo's fifth year at Burning Man, and the desire to create bigger and better art projects for the event occupies more and more of his time. Could this rising passion for Burning Man replace the Kinetic Sculpture Race in his life?

"I think the two events will keep feeding off each other for a while. Burning Man has a lot of the same elements our race has, only magnified by a million times. It's a much larger stage. And our Kinetics are definitely infiltrating Burning Man -- you see people using a lot of our engineering and designs now."

So can we expect to see a story about his 40th anniversary with the Kinetic Sculpture Race 10 years from now?

"Wow," he said. "I'd be 62 years old. I'm sure I could still race in 10 years if I really wanted to, but I don't know. On one hand, I don't want to be some old decrepit guy they drag out every year as a symbol of the race. But then, I think about quitting and -- I don't know. Someday, maybe. For now, how could I not do it?"