'This is Crunch Time' 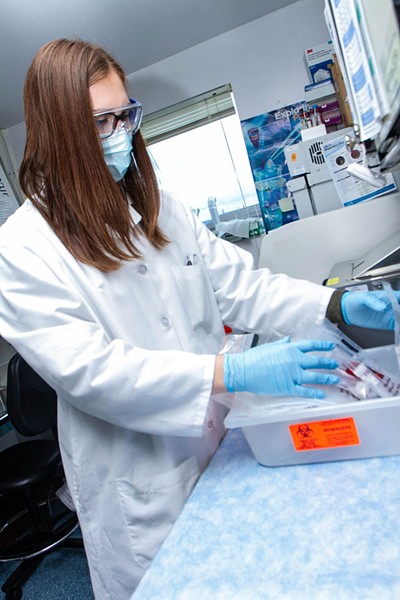 In a draft of a rare joint statement, the Rural Association of Northern California Health Officers likens the current state of COVID-19 to a wildfire engulfing the entire region and urges residents to redouble efforts to curb the virus' spread, warning if they wait for further state restrictions it may be too late.

While the statement is reportedly still being finalized, Del Norte Health Officer Warren Rehwaldt included its draft in a Dec. 18 letter to county residents.

The Northern California region remains the only in California not subject to the stay-at-home order issued by the state for regions where cumulative hospital intensive care capacity falls below 15 percent. As of Dec. 22, the 11 counties in Northern California have a combined 29.5 percent available ICU capacity, according to the state, despite escalating case counts but the health officers warn the region has a limited number of beds and little room for error.

"Risk is higher than it's been at any point in the pandemic," the draft statement says. "Even as a region, we only have about 120 ICU beds, and 15 percent capacity leaves fewer than 20 beds; that's for people with heart attacks, strokes, trauma and COVID-19. We, the Rural Health Officers of Northern California, are gravely concerned that this cushion of beds could easily be overwhelmed, and most counties in our region are already struggling to find hospital beds for patients requiring a higher level of health care. As your public health officers, we are asking our communities to do what they've done during times of disaster so many times before, which is to band together and do everything we can to stop this firestorm."

In a Dec. 17 media availability, Humboldt County Deputy Health Officer Josh Ennis said the state's ICU metric fails to reflect how patients typically move through regional healthcare systems. Typically, when Humboldt County hospitals have patients needing a level of care they can not provide, or when capacity becomes limited, patients are sent south to the Bay Area, while eastern parts of the region send patients to Sacramento or to Reno, all of which are currently on the brink of being overwhelmed themselves.

In recent interviews with the Journal, staff at St. Joseph Hospital said they are already facing issues transferring patients, noting there are people currently in the emergency room awaiting transfer outside the area for specialty care because there are currently no hospitals available to receive them ("Fatigue, Frustration and Fear," Dec. 17).

Ennis also pointed out that while the Northern California region has a total of about 120 ICU beds, that pales in comparison to the more than 1,300 in the Bay Area or the more than 500 in the Sacramento region, making the margin for error incredibly slim. Ennis said healthcare workers statewide and nationally are in incredibly high demand, which could complicate efforts to meet a surge in Humboldt County, which typically depends on traveling nurses and providers to make up a percentage of its workforce, and ICU beds and ventilators only serve patients if there are trained people to staff them.

"There has been a lot of focus on this because it is our most limited resource and no one wants to be forced into a position similar to wartime medicine where you're having to choose who gets the vent, who gets the ICU bed," Ennis said. "... If we're reaching a point where there aren't enough people to care for all these, the quality of care is going to suffer. So we've focused on these limited resources and we've increased them substantially — both ICU beds and vents — to a point where other issues are probably going to come into play, such as the healthcare workforce, before we actually reach the hard cap of these finite, limited critical-care resources."

St. Joseph Health CEO Roberta Luskin-Hawk has said the hospital has plans to move existing staff from other areas of the hospital into its COVID-19 respiratory unit and ICU if needed, and then would train other community healthcare workers to staff the county's 100-bed alternative care site at Redwood Acres, should it become necessary. But this would require staff working outside their areas of expertise, which could impact the quality of care provided to some patients.

In other regions, some healthcare workers have also publicly questioned the accuracy of the state's ICU capacity assessments, saying they fail to adequately account for staffing issues. And in the Bay Area region, some doctors have said the state database shows their hospital having available beds when they in fact do not.

When it comes to the Northern California region, ICU beds are also not spread evenly throughout. Rather, the bulk of them are in Shasta County, while Trinity, Modoc and Lassen counties have none.

In their draft joint statement, the regional health officers made clear they do not expect an influx of resources from outside the area, as California had a cumulative available ICU capacity of just 1.4 percent as the Journal went to press Dec. 22, according to the state, and case counts continue to surge throughout the nation.

"Unlike what we experienced with the wildfires, our entire nation is on fire at the same time, so accessing mutual aid is increasingly challenging," the draft statement says, adding that social gatherings, travel, not masking and going out when symptomatic are like fuel for the fire

The health officers' united plea comes as Humboldt County has seen its case count spike sharply in recent weeks, with — 10 months into the pandemic — the county having tallied 41 percent of its total cases, 23 percent of its hospitalizations and 40 percent of its deaths over the first 22 days of December.

"We want people to take this moment seriously; this is crunch time, the pandemic surge that has been talked about for months," the draft statement says. "We have to do better, and we have to do it now. We cannot emphasize it enough; we have jumped in cases along with the rest of the state because of people gathering, not taking enough precautions and not taking this virus seriously."