This is Very Real 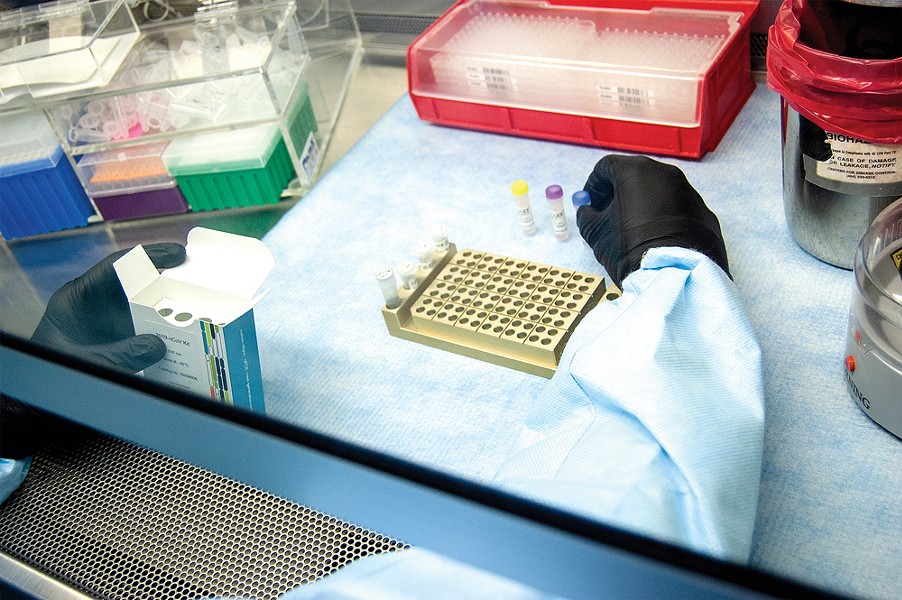 Credit: Thadeus Greenson A sign sits outside St. Joseph Hospital's emergency room warning people not to enter if they are experiencing flu-like symptoms.

As the full reality of the COVID-19 pandemic washed over California and the United States the weekend of March 14, prompting virtually all Humboldt County schools to shutter indefinitely and Gov. Gavin Newsom to ask all bars, breweries and wineries to do the same, reactions were decidedly mixed.

While most Humboldt County residents likely fell somewhere between, the loudest voices were the extremes. On one side, we saw people flocking to hoard toilet paper and hand sanitizer with a palpable fear. On the other, we saw people cling desperately to old routines as patrons flowed into bars, musicians played and bartenders poured.

None of this is sustainable and we all need to take a deep breath, look at some facts and collectively take control of our community's future.

First, the terrifying. Looking at the way this virus has spread through other communities with deadly impacts, there is simply no question Humboldt County's health care infrastructure will crumble under its weight if infection becomes widespread. (Thankfully, as the Journal went to press March 17, the county had yet to record a confirmed case, though that may have more to do with an unavailability of tests than some mystical disinfecting power of the Redwood Curtain.)

Because of the shortage of test kits, providers are still trying to conserve them, making sure they are available for the most vulnerable — those with underlying risk factors like age or poor health — or those most likely to spread the virus widely, like healthcare workers or people in assisted living facilities. And the cold reality is that studies show that people who feel perfectly normal can still carry the virus and spread it widely for days, if not weeks.

What we know for sure is that once the virus starts to spread in a community, the rate of infection seems to increase exponentially, meaning one day you'll have 10 cases, a week later you'll have 100 and then, 14 days after that first case, you'll have 1,000. The U.S. Centers for Disease Control's coronavirus model projects a worst-case scenario of 214 million people infected and 1.7 million dead nationwide. That's 65 percent of the U.S. population infected, with three times more Americans killed than in World War II.

What would that look like in Humboldt County? It would mean almost 89,000 people infected with hundreds dead. A study of 72,000 patients in Wuhan, China, found 5 percent of cases were critical. A similar rate in Humboldt County based on the CDC's worst-case model would leave more than 4,400 people in critical condition locally. Humboldt County also has more than 24,000 residents over the age of 65, which has repeatedly shown to be the hardest hit age group.

So how is Humboldt County prepared to deal with this potential influx of critically ill patients in respiratory distress?

Let's start with the raw numbers. The county has 22 intensive care unit beds spread across three hospitals — six at Mad River Community, 12 at St. Joseph and four at Redwood Memorial. Between them, St. Joseph and Redwood Memorial have 17 ventilators, the bedside machines necessary to treat the viral pneumonia in critical COVID-19 cases in order to keep patients alive until they can fight off the virus. We don't know how many Mad River has because administrators there didn't respond to Journal inquiries. But if we assume the same ratio of ventilators to ICU beds as we see at the other hospitals, that would put the countywide total at maybe 25.

If the system were to face an influx of even 2 percent of the critical cases imagined under the CDC's worst-case model, 88 critically ill patients would be lined up for 25 ventilators, necessitating some very hard choices. And that's at 2 percent. At 10 percent, the number of critically ill would spike to 440.

But that doesn't even address the fact that you need nurses and physicians, some with highly specialized training, to staff ICU units and care for intubated patients. It's unclear whether Humboldt County has the staff — even when fully healthy — to sustain that kind of effort nonstop for weeks. And while administrators have noted additional ventilators could be made available through the national reserve, whether we could find trained professionals to staff them and how much faith we have in the federal government to deliver them are real questions.

This isn't to blame anyone, least of all our medical providers. This is simply the reality of staring down a black swan event in pandemic form.

It's also not meant to incite panic. It's to say we need to take this deadly seriously.

The good news is, at least based on the limited information we have, the virus is not yet widespread here, which means there's still time to do what's necessary to stave off potential communitywide disaster: flatten the curve and prevent its spread. If we do this well enough, if enough of us make sacrifices, this may slow the infection rate to the point where our local healthcare providers have a fighting chance. It might mean the rate of critically ill people entering ICUs is slow enough that we always have enough beds and ventilators. It might save lives. Lots of them.

But it will take widespread sacrifice and dedication. The solution is not a mystery. Experts have told us what this looks like: staying at home, being hyper vigilant about hand washing and disinfecting, and setting up systems to care for our most vulnerable residents while they shelter in place.

It will require bold, creative thinking from state and local officials. We're heartened to see some of that has already begun, with Eureka City Schools pivoting from its educational mission to a plan that relies on its bus drivers and routes to provide two daily meals to local children. Maybe local governments can hire those left temporarily unemployed from business closures to form makeshift disinfecting crews, or to provide support services for those still working essential jobs. Perhaps temporarily out of work educators can band together to provide daycare services for the children of our nurses and doctors, allowing them to work the long shifts this crisis will surely necessitate. These are the types of community interventions we will need, and we may need a lot of them.

While we await the widespread availability of COVID-19 testing — a crucial element that is beyond our control — we need to move into the mindset of community sacrifice. This will be hard. It will interrupt life as usual. For everyone. But the alternative is quite possibly widespread death and illness.

In a recent interview with the BBC, Graham Medley, a professor of infectious disease modeling at London's School of Hygiene and Tropical Medicine, said people are looking at the situation backward, either afraid they'll get the virus or feeling bulletproof because they are young, healthy and in a demographic that statistically is at little long-term risk.

And that's the reality: At this point, unless you've been tested, there's no way to know whether you're carrying a neighbor's death sentence.

This virus is so new that we don't know exactly how it transmits, though we do know that both asymptomatic and pre-symptomatic patients are contagious and can spread it without knowing they're sick. Studies have also indicated it can live on some surfaces for up to three days if they are not disinfected. That, coupled with the current limitations on testing, should be enough to convince us all to listen to the experts and take social distancing recommendations to the extreme.

At the Journal, we've already made some changes, and not just shifting the focus of much of our annual cannabis issue to covering this health emergency. First we set up everyone who is in regular contact with someone at higher risk — those who serve as primary caretakers for seniors or live with someone with an underlying health issue — to work from home. Then we figured out how to get as much of the rest of our staff out of building and working remotely as possible. It's been a challenge but a necessary one, to limit the exposure of our staff, their loved ones and the greater community. On that last note, we've also eliminated movie listings, the live music grid and our community calendar, replacing the last with a schedule of local television offerings via KEET because we all need to stay home.

This isn't a hoax. But it's also not hopeless. As a community, we can sacrifice, stay home and come up with the bold local solutions needed to help flatten the curve. It's honestly the only option.

Jennifer Fumiko Cahill is the Journal's arts and features editor and prefers she/her pronouns. Reach her at 442-1400, extension 320, or Jennifer@northcoastjournal.com Follow her on Twitter @JFumikoCahill.