Bluesman T-Model Ford, plus Humboldt Collective and a new piano for WCA 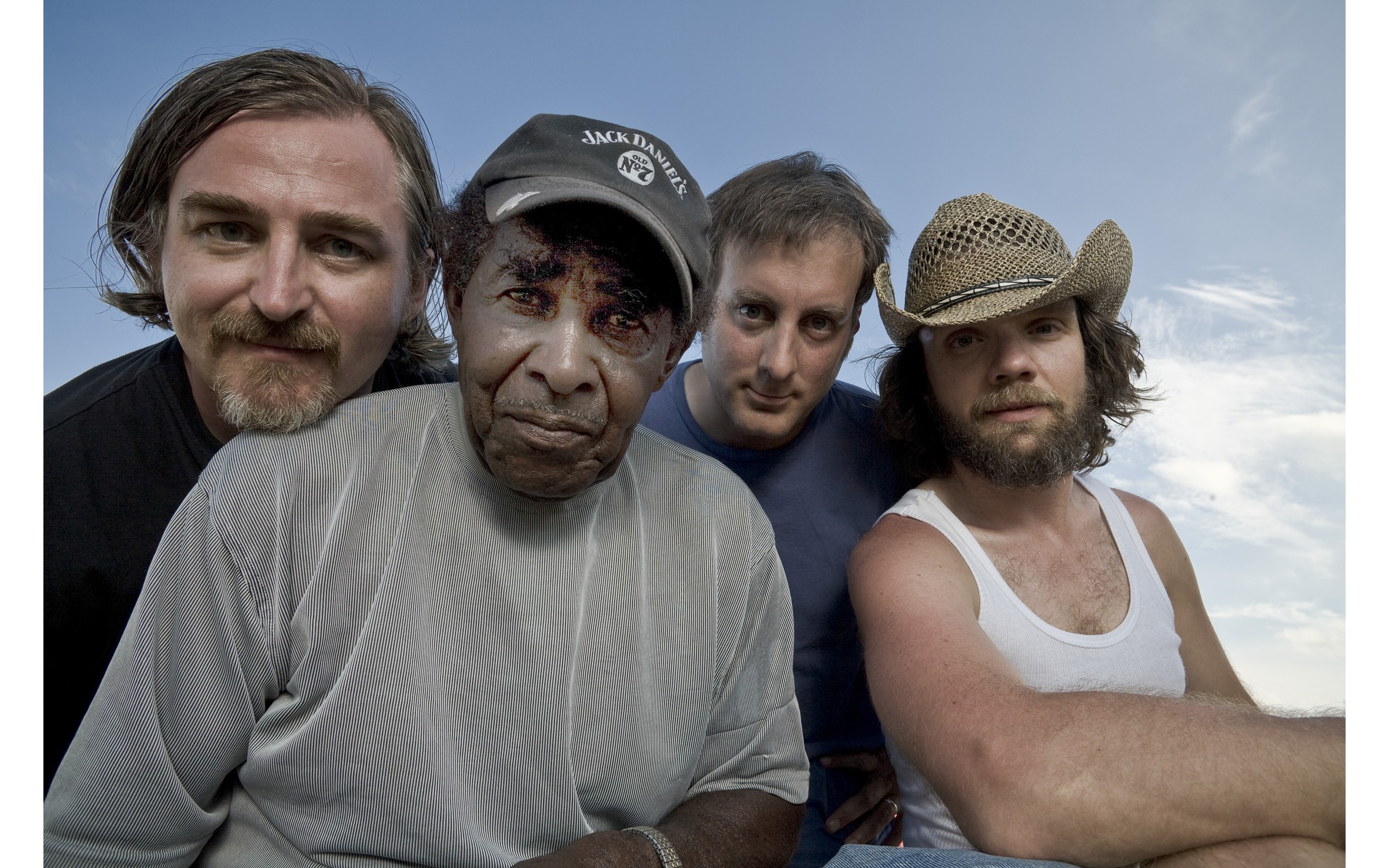 "I was born in the swamp, down in a ditch that goes down to the swamp," says James Lewis Carter "T-Model" Ford. The swamp was near Forrest, Miss. Exactly when he was born is in dispute. His driver's license has one date, his passport another. He claims he's 90, but his relations say he's younger. One way or another, he's an authentic old-time Delta bluesman who now lives in Greenville, not so far from Forrest.

He didn't take up the guitar until late in life -- he was 58 (or thereabouts) when he started picking out blues, drawing on memories of Muddy Waters and Howlin' Wolf. While many bluesmen today just sing about hard lives, T-Model lived one. He was a farmworker as a boy, graduated to sawmill work and became a foreman before he was sentenced to a chain gang for murder. As he told the guys at the hipster label Fat Possum Records, "I could really stomp some ass back then. I was a sure-enough dangerous man." So when he growls a song like "44 Blues," accompanying himself on a slightly out-of-tune guitar, you believe him. He's the real deal.

T-Model has had quite a year so far: He had a stroke in April that did not deter him from touring, got married for the sixth time, played two shows on what may have been his 90th birthday in June then took his guitar to Europe, where he is adored. He's been on the road in the States solo this summer, but this weekend meets up with a "dark blues" band from Seattle called Gravel Road, a trio who say they're honored to be backing "Uncle T" -- adding, "We hope he doesn't bring the knife on the road with him." They'll back him when he hits Nocturnum for an early show on Wednesday, Aug. 4.

That's actually a two-show night at Nocturnum. After the blues it's the usual Womp Womp Wednesday, this time with Hellfire Machina from Brooklyn, plus Grasshopper of Konkrete Jungle (also from NYC) and Edgie.

If you've been to any of the ever-growing number of rave-ish DJ dance parties, you know people like to dress for them in spacey outfits. Friday at the Red Fox, that urge is rewarded: Super DJs Touch and Psy-Fi provide the soundtrack for the Super Hero Super Villain Costume Party. Come as your favorite super person and you get in free.

Seth Bernard and May Erlewine are a couple of folky songwriters from Michigan (and a couple) who were once known as Seth Barnard and Daisy May, respectively. (The name changes make for a long story.) Both record for Earthwork Music, an independent label affiliated with Seth's family's Earthwork Collective farm, where they play every year at the annual Harvest Gathering to celebrate indie folk and "earth-friendly activism." They also help organize Water Festival events in the Great Lakes region, which celebrate clean water and access to the shores. Right now they're making their way across the country with a drummer (Michael Shimmin) and a U-Haul trailer full of gear. They hit the West Coast Tuesday, Aug. 3, stopping at the Jambalaya to sing their songs. I think they'll fit right in in Humboldt.

Westhaven Center for the Arts celebrates a recent acquisition Friday with what they're calling an Inaugural Concert with New Piano. The piano is not exactly new; it's a small Baldwin Acrosonic on loan from jazz pianist Darius Brotman, who says he bought it because "of all the mini-sized pianos it's one of the best." He'll be playing straight-ahead jazz on it Friday accompanied by bassist Richard Saunders, a one-time local who now lives in the Bay Area.

This is one of three shows this week at WCA. On Saturday Jeff DeMark tells his stories and sings his songs with The LaPatinas,  a band featuring his bro Paul DeMark, bassist Ross Rowley (of Delta Nationals fame), violinist Jim Hatchimonji and guitarist Jim Silva plus a special guest -- Jeff's son, Jesse DeMark. "He's going to play either sax or trumpet," says Jeff.

Got a note from sax man Chris Noonan about the Humboldt Collective show Thursday at the Red Fox. The Humboldt Collective Vol.1 was a CD/marketing tool assembled by Brian Swizlo and company as a college project for a friend. Now they're planning another. "The goal is to promote Humboldt music outside of the Redwood Curtain," says Noonan. "'What is Humboldt music,' you ask? Humboldt represents a vast array of talent the spectrum of which is far-reaching. The idea is to create cross-genre compilations that have a good flow to them. The first album paired reggae, hip hop, funk, rock and gypsy jazz; the next volume may contain samba, bluegrass, vocal jazz, etc."

While they're working toward THC Vol. 2, they're reissuing Vol. 1 and throwing a party to celebrate. "In order to represent all of Humboldt music you would need a weeklong festival," says Noonan. But they're squeezing a lot into one night: "The evening starts out with a champagne social featuring Berel Alexander and Vidagua, followed by SoHum's NPK, Ishi Dube, Bump Foundation and Moo-Got-2. Chris Wixson will be the host of the evening and will definitely share some of his talents as well. Miles 'Psy-Fi' Ross and The Middle Agent will both be spinning throughout the night." With an apology to those not included, he invites any Humboldt musicians to submit work for the next comp via chris@fatbol.com. "We want to include as many people as we can who are serious about recording their music and getting it out there."

Since meeting him at his now-closed Ijal's Jamaican Kitchen, where he produced some great ital food, I've thought of Ras Melburn as a chef. Turns out he's a musician too. When I ran into him at Reggae on the River he was handing out flyers for a show he's doing this Thursday at Humboldt Brews with Mr. Majestic, a dancehall/hip hop artist from JA now living in the Bay Area. "Straight from Jamaica, live and direct," says Ras Melburn, who sees a natural connection between his two career paths. "Music was inside I and I from when I and I was a baby," he says, "and food is the staff of life -- the two combine together and I and I have to share it with the people, because both are life."

Wild Cajun fiddler Tom Rigney, formerly of The Sundogs, now plays with a jazzy band called Flambeau. He's been coming up from his Sonoma County digs to play the Redwood Coast Jazz Festival for the last few years, to much acclaim. Thursday evening he plays for free on the Eureka Waterfront (foot of F) as part of the Eureka Summer Concert Series.

Most people don't know about it since it's mostly low-key, but every summer Explorations in Afro-Cuban Dance brings some of the world's top percussionists and dance instructors to Arcata for a week of workshops. Per tradition, they finish up with a Saturday night concert at HSU's Van Duzer Theatre with all the teachers playing and dancing together.

They're still headquartered in S.F. but McKinleyville seems to be a home away from home for The Pine Box Boys, who once again sing about murder and etc. this Saturday night at Six Rivers Brewery.

You can read elsewhere in this paper about the Ink People's big Golden Road benefit Sunday at the Old Creamery in Arcata. That's not the only Inker bennie this week: Wednesday, Aug. 4, Mad River Brewery Tasting Room in Blue Lake has Pints for Nonprofits with music by Inker Kyle Stasse aka DJ Knutz and proceeds going to the arts org -- a very good cause.