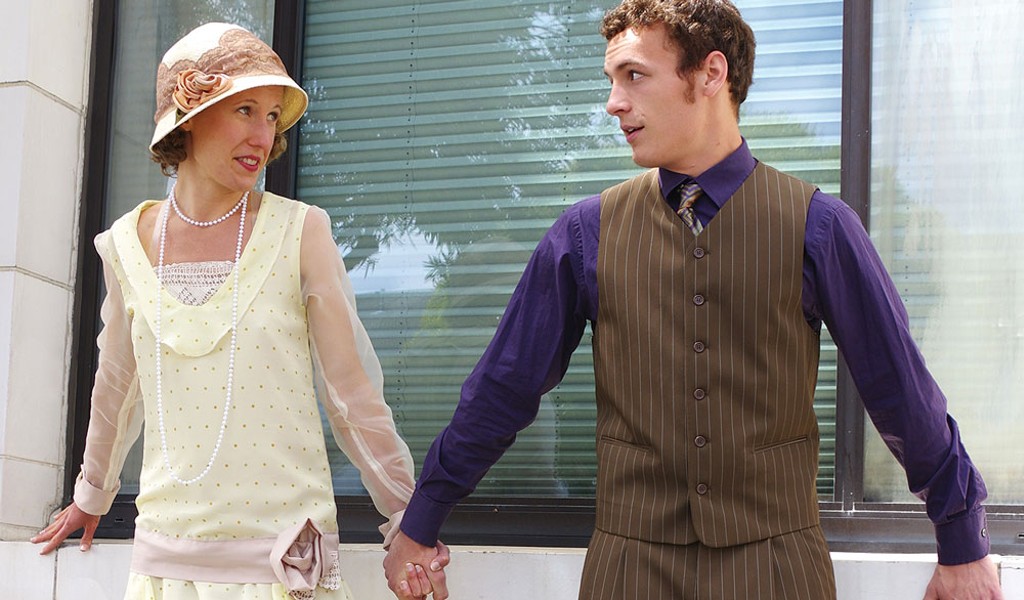 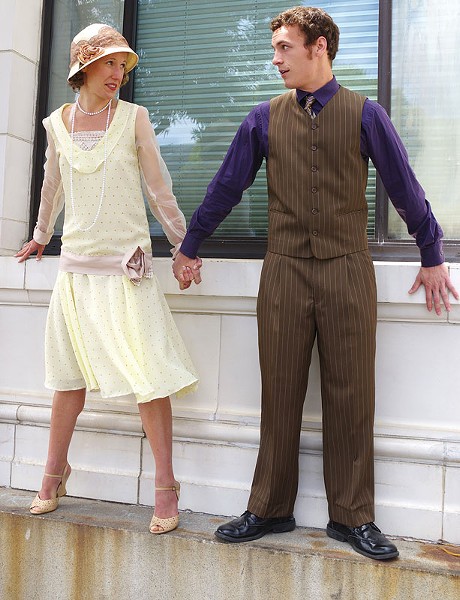 From the opening tableau of a 1920s Manhattan street scene that fills the Van Duzer Theatre stage, the Humboldt Light Opera Company production of Thoroughly Modern Millie has the look, the pace and the pizzazz of Broadway. It has all the elements of a big classic musical: vibrant costumes (by Caroline Allander, Madeline Myers and director Carol Ryder) sparkling choreography with sly Busby Berkeley touches (by Melissa Hinz, assisted by Hannah Mullen Jones), an 18-piece pit orchestra (conducted by Justin Sousa), plus painted backdrops falling and rising while clever set and prop pieces whiz on and off the stage with Jayson Mohatt's inventive scenic design.

Like 1920s Broadway shows in particular, this early 21st century musical has more to do with stars than story. Melissa Hinz as Millie, the Kansas girl who quickly becomes a worldly New Yorker, plays the part with personality, assurance and happy feet. She has the '20s look, while delivering her lines with the wisecrack intonations of '30s screwball comedies.

The songs span more than a century of music. If "The Speed Test" sounds a lot like Gilbert and Sullivan, that's because new lyrics are grafted onto an Arthur Sullivan tune. There are a couple of other operetta melodies by Victor Herbert, as well as the title song by Sammy Cahn and Jimmy Van Heusen for the 1967 Julie Andrews film, which is the source material for this stage musical. (Musicals that started as movies seem quite the North Coast trend these days.)

The new songs are by Dick Scanlon (lyrics) and Jeanine Tesori (music). Tesori wrote the music for HLOC's hit from last summer, Shrek The Musical. The songs are pleasant and forgettable, but the underscoring (presumably by Tesori and whoever did the orchestration) brilliantly evokes the jazz age and old movie soundtracks.

The biggest weakness is plot. The main story is predictable and the secondary story is incoherent. Millie is thoroughly modern because her goal is to marry for money and not for love. So it's not hard to figure out how that will go, complete with fairy tale touches and last-minute revelations. As for the secondary story, in the movie it involved — of all things in a musical comedy — a white slavery ring targeting orphaned young women and run by sinister Chinese villains. Responding to the racism in this version, the 21st century stage musical kept the Chinese villains but made one of them sympathetic — he falls in love with a victim.

The HLOC version completely removes the once common stereotype of funny-talking Chinese and replaces them with Italian villains with heavy accents. Thanks perhaps to The Godfather and those collections of Italian love songs marketed as "Mob Hits," contemporary culture seems to find it acceptable to stereotype Italians as criminals, however pathetic or buffoonish. The North Coast may be sensitive to its notorious history regarding Chinese residents, but others experienced prejudice here as well. During World War II, Italian-Americans in Arcata were placed under curfew and their movements were restricted.

Mostly unacceptable now, stereotyped ethnic humor and ethnic villains were standard elements in American entertainment well into the 20th century. This production tries to lower the temperature by dodging the white slavery aspect and suggesting it's more of a kidnapping plot. Why kidnappers would target orphans with no one to pay ransom for them isn't explained.

Still, audiences are more likely to leave with impressions of dazzling dancing stenographers and the dramatic skyscraper-ledge set than with many memories of the story or the songs. Thoroughly Modern Millie is a thoroughly postmodern pastiche meant to revive Roaring Twenties style and evoke the classic singing-and-dancing musical comedy. Except for its more currently fashionable lighting (often dim compared to the tried and true standard of brightly lit musicals), this production delivers.

Directed with usual panache by Carol McWhorter Ryder, with musical direction by Katri Pitts and Amy Chalfant, and with an additional cast too large to name individually, Thoroughly Modern Millie continues for through Aug. 17 (Fridays and Saturdays at 7:30 p.m., Sundays at 2 p.m.). 822-1318, hloc.org.

Arcata Plays in the Park begin this weekend. Shakespeare's A Midsummer Night's Dream, directed by Evan Needham, premieres on Friday, Aug. 8 at 7 p.m., and runs Friday and Saturday evenings through Aug. 30 at Arcata's Redwood Park. Scheherazade, a family-friendly retelling of Arabian Nights tales (genies, magic carpets, etc), directed by Charlie Heinberg, opens Sunday, Aug. 10 at 2 p.m. and plays every Sunday through Aug. 31. There's an admission charge for Shakespeare but Scheherazade is free. 822-7091, www.playsinthepark.net.