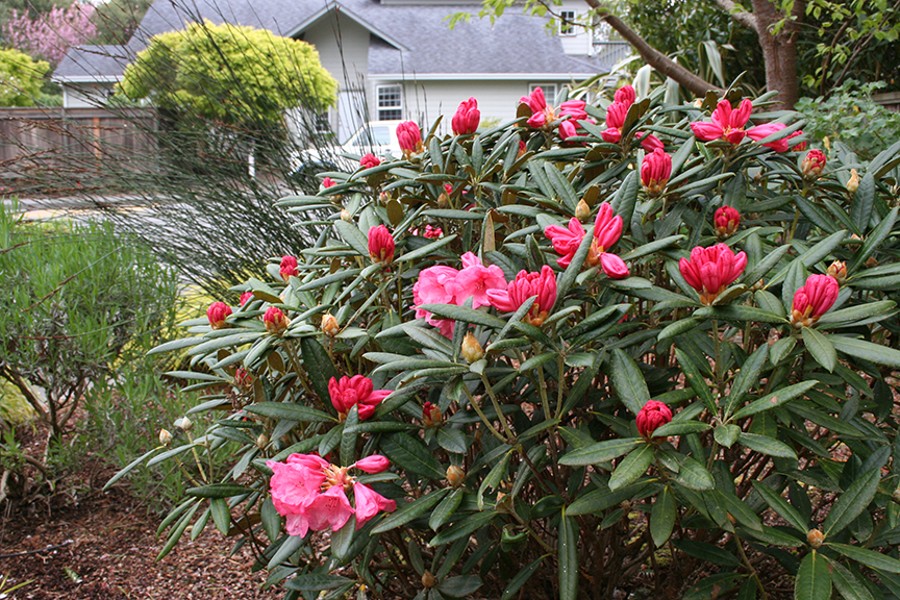 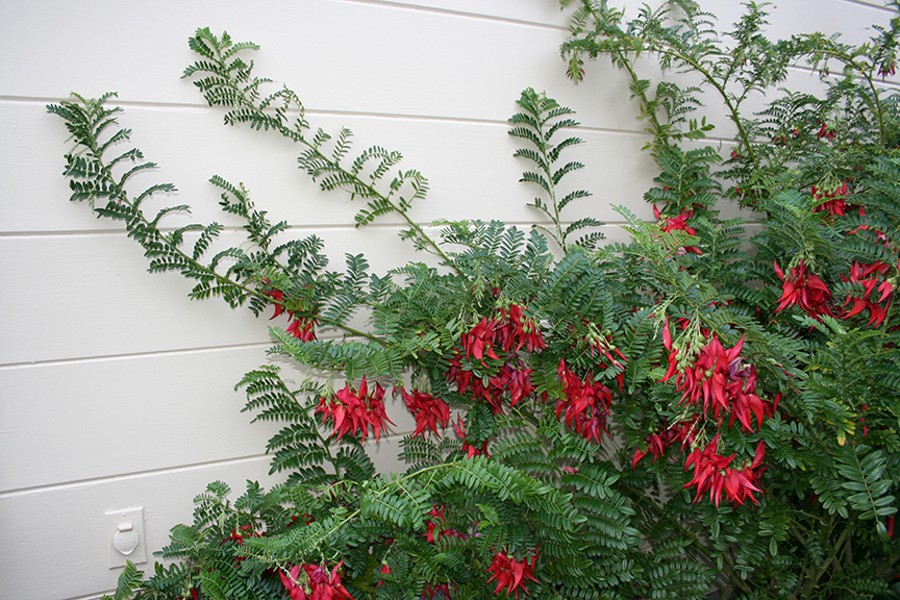 There's plenty to look at in the winter garden if you attune your eyes to the subtle beauty of peeling bark, colored stems, tufty beige ornamental grasses and upright brown seed heads left over from summer. However, nothing brightens up the garden like a few flowers, and carefully placing some winter-blooming plants around the garden can enhance the stark lines of the landscape at this time of year. In order to use these plants to their best advantage, think about how you use the garden in winter, which is to say not very much. You'll do best to place your winter-interest plants where you can see them from windows, entrances and main pathways so you will actually get to enjoy them. Here are a few top picks which flower at this time of year.

Darwin's barberry blooms in January and February and has bright golden flowers which make for a cheerful antidote to the winter gloom. It grows 6 to 8 feet tall over 10 years and has glossy evergreen foliage which holds up well as a backdrop to rhododendrons, red-twig dogwoods, and winter-blooming Ericas. While its large size, prickly leaves and thorny stems make it best for less-traveled areas of the garden, it has a loose, fountain-like shape which contrasts nicely with other landscaping shrubs, and the profuse show of edible blue berries, while too acidic and seedy to be particularly palatable to people, brings the birds flocking in late summer and fall.

This unusual evergreen shrub was introduced to me by the nurserymen at Oregon's Xera Plants, who grow them in a similar but slightly colder zone. This 6-foot shrub sets out long, looping branches with feathery light green leaves, and is a perfect pick to espalier, or train, against a sunny wall. It's known for its huge clusters of pendulous coral, red or white flowers in the shape of a parrot's beak. Though usually thought of as a summer-bloomer, in the last three years this wildly tropical-looking plant has also bloomed for me between December and February. For coral flowers and a tough habit, try the regular C. puniceus, or experiment with C. 'Red' or C. 'Albus' for red or white flowers, respectively.

Old-fashioned varieties of flowering quince have been both beloved and cursed for many years. They make a hardy, low-care shrub or hedge, but have extremely mean thorns making them suitable only for the back of the garden, or as a barrier to keep unsavory sorts from trespassing. However, a new line of flowering quince retains those hot scarlet and salmon blooms but trades the large size and unfriendly nature for a 3- to 4-foot tall thornless shrub that can fit anywhere. The Double Take series of flowering quince includes 'Scarlet Storm,' 'Pink Storm,' and 'Orange Storm,' and blooms profusely from late winter through early spring. The flowers on the pink ones look like tiny sweetheart roses and would look great in an old-fashioned English garden.

We're lucky here on the north coast to have such gorgeous native plants, and our native flowering currant is one of the best. It comes in light pink (the regular R. sanguineum), white (R. 'Alba'), and a vivid hot pink (R. 'King Edward VII') that plant dealers optimistically label as red. It grows to about 8 feet tall and a little less wide, though it can be trained to a more slender habit by removing some of the outer branches at the base. The height makes it ideal for hummingbirds who would like a safe place to nest, and the long-lasting wisteria-shaped flowers from late winter through spring feed pollinators and hummingbirds. In fall, both birds and people may enjoy eating the small tart currants it produces, though sugar is usually required.

With both a parade and a specialty nursery dedicated to rhododendrons, it's no wonder they are such a popular shrub here. Though the ungainly specimens seen around parking lots don't show the genus to its best advantage, there are a wide variety of shapes, sizes, types of foliage, bloom times and other attributes to choose from, so if you are looking for a rhododendron for your garden, it shouldn't be hard to find one that's the perfect fit. As far as winter blooms go, there are two varieties of particular note. Rhododendron 'Christmas Cheer' is a tough, undemanding shrub growing to 5 feet tall with light pink flowers. A few blooms open as early as October, with the shrub bursting into full-on flower right around Christmas. Rhododendron 'Noyo Dream' is another early bloomer which usually starts at the beginning of February. The foliage on this one is stunning, with long, pointed leaves in deep green with impressions along the veins. The hot pink blooms fade to light pink, and the shrub has a low, mounded form, only reaching 3 to 4 feet in 10 years.

The traditional Lenten rose (Helleborus orientalis) blooms later in spring, but the new Helleborus Gold Collection has been hybridized so the plant can begin its season anywhere between mid-November and mid-March. This means that, with a little planning, you can have blooms through the entirety of winter. H. 'Jacob' is the first to appear, with crisp white flowers in November which age to a dusky pale pink. H. 'Cinnamon Snow' continues the display in December with a cream-colored flower which takes on a warm cinnamon-pink tone over time, while H. 'Pink Frost' starts in January with a vivid two-tone pink and white flower over marbled foliage. Lenten rose of all kinds make good flowers for indoors, too. Either float the blooms in a bowl of water, or enjoy in a vase by burning the ends of the cut flower stalks to keep them from gooping up with sap. The thicker the stems, the longer the flowers will last.

Genevieve Schmidt is a landscape designer and owns a fine landscape maintenance company in Arcata. She blogs over at www.NorthCoastGardening.com.