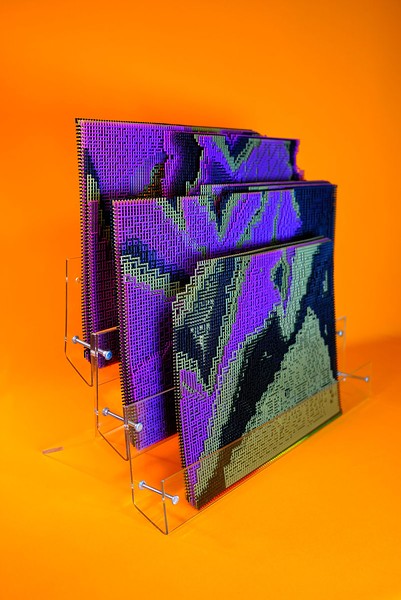 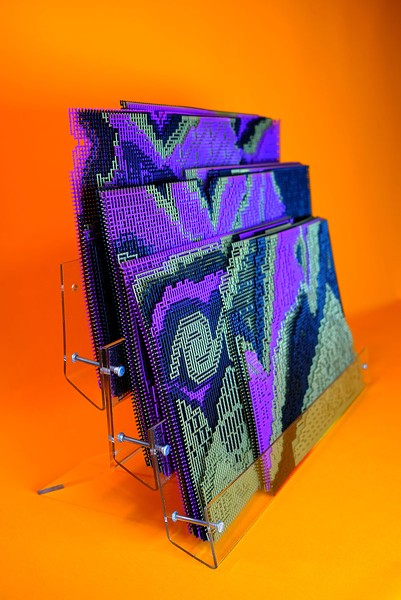 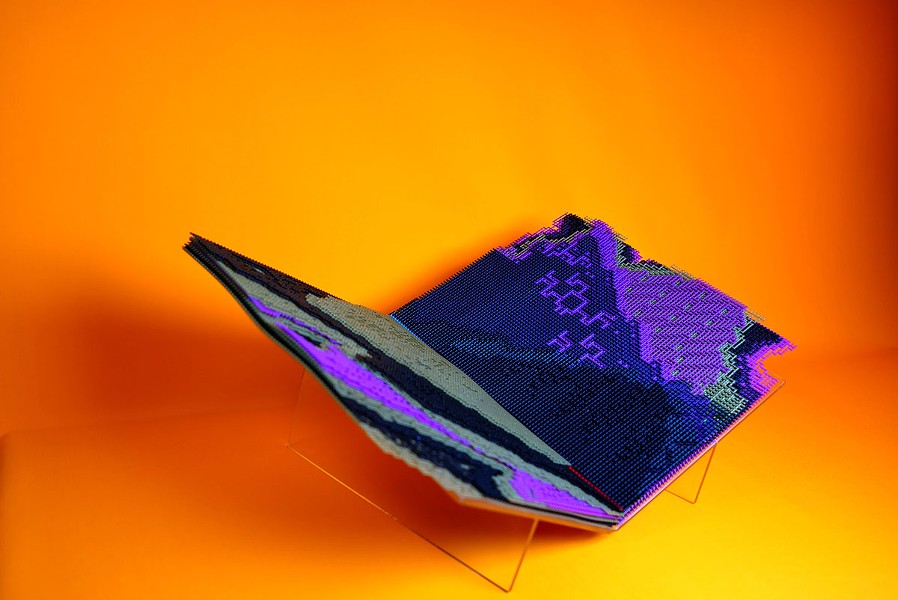 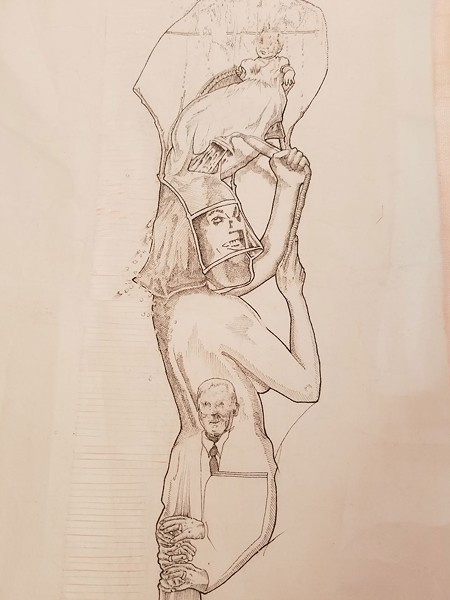 Photo by Gabrielle Gopinath Detail of Emmaly Crimmel's "The Feed," 2018, pencil on paper and mixed media. 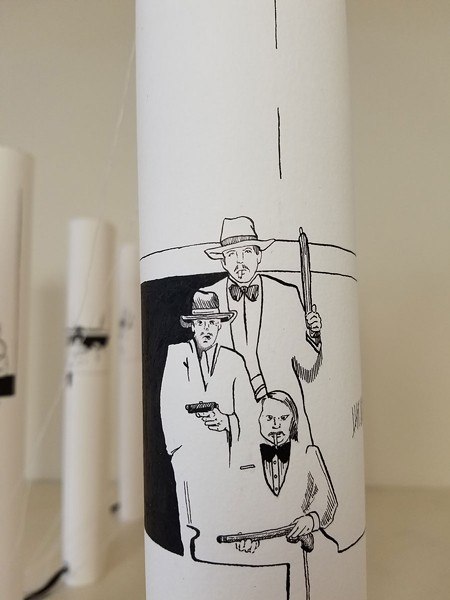 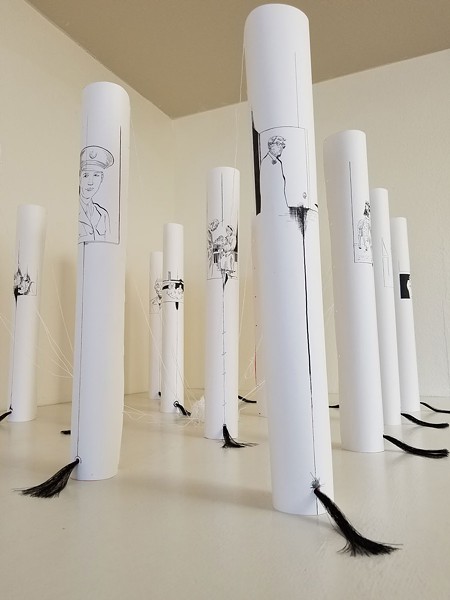 In Emmaly Crimmel's drawings, people and things are always both wired and isolated. The artwork in Crimmel's debut solo drawing show at Redwood Arts Association depict a space defined by interconnected systems made up of nearly identical serial units. Drawings in pencil or pen and ink are inscribed on paper or fabric supports that often serve as bodily surrogates, curling, drooping, trailing or bending rather than remaining flush with the wall. A length of unravelling flesh-pink fabric bearing a central band of delicate, tattoo-like imagery is suspended from a barred gallery window so that it droops across an ironing board on its way down.

In "The Feed," a long, narrow work in pencil on a paper scroll, characters morph into one another. This yields an unsettling image flow familiar to any Instagrammer — a baby in a christening dress morphs into a woman standing naked in the shower, then into an older man wearing a business suit and then to a close-up view of ringed, interlaced hands.

"The Estate" features characters drawn in delicate, spiky pen and ink isolated halfway up smooth, tall cylinders of white rag paper that are packed in tight formation and connected by clustered tangles of white thread. At the bottom of each paper tower, a short, glossy black ponytail emerges. It's an arresting sight that evokes all at once a hypostyle hall, a chat room, a submarine's missile tubes and the fairy tale Rapunzel.

When I spoke with Crimmel, the recent Humboldt State University graduate described her characters as being "linked" but also "tethered" by their interconnectedness. In her work, those connections appear less as a choice than as a baseline condition of life the way we live it now — confusingly, it's both a means of life-giving connection and a potentially oppressive force eroding individuality.

Crimmel and the second artist I'm writing about this month share several traits — notably, commitment to formal inventiveness and a penchant for the spaces at the margins. Linda Zeb Hang, a painter and bookmaker who is exhibiting an edition of six artist's books at Booklegger this month, told me that she thinks of her artist's books as "auxiliaries;" devices to create visual effects that can be used as source material for paintings. The books are thought provoking in their own right.

Hang, born into a Hmong refugee family in Stockton, California, grew up in a family she described as being "immersed in oral storytelling and shamanic healing arts." She studied typographic design, bookmaking and sculpture at San Francisco Art Institute before coming to Humboldt County for an artist's residency four years ago and deciding to stay.

Hang's books contain no text; they are intimately sized sculptural objects, books by virtue of the codex format they share. They are sewn together from plastic mesh canvas, grids commonly used as a support for beginner cross-stitch projects. It comes in nuanced colors like purple, navy, beige and charcoal gray. You've seen these muted decorator hues in doctors' offices and waiting rooms and motel lobbies, so the palette will be vaguely familiar.

"It was hard to find art materials that were cool and really different, being out here," Hang said. So she went to a chain craft shop. The material has its advantages: It's cost-effective, tough, flexible, waterproof, and can be spray-cleaned if necessary. Despite their preciousness, the books don't need to be handled with extreme care.

"You can touch them, go ahead," the artist told me with a smile. "They are meant to be handled." In the hand, the pages are stiff but flexible, their frayed ends of their plastic fibers spiky on the fingertips. The shapes carved into them can be discerned by touch, as well as sight. Hang told me she had wanted this to be artwork that could be appreciated on a purely tactile level, "like a book in Braille." Gridded pages bear an incised array of forms carved in negative space. Every aspect of construction, from the incision of imagery to the winding of rainbow-colored yarn to create a binding, Hang did by hand.

Hang's process involves excising individual units of the grid with a small knife to create pixelated representations of erosion processes. Stepped contours stand in for curves, the way they do in early computer graphics. Hundreds or thousands of tiny precision cuts generate forms that recall in turn the ziggurat-like starships of Space Invaders, the menacing semi-trucks of Frogger, or the ghosts in Ms. Pac-Man. These shapes congregate at the pages' margins, where edges get ragged and organic, yielding the titular process of erosion. Negative spaces where the plastic grid has been carved away channel light like a field of tiny window frames, generating blooms of nuanced color by bouncing refracted light from one colored surface to the next. When held up to the sky, the book reminded me of Lite Brite, the translucent plastic tiles children arranged on a lightbox to make glowing, crudely pixellated pictures.

For all the survivalist toughness of their human-made materials, there's a sense in which these artist's books evoke a powerful nostalgia for the 1990s and early aughts. And why not? Allure so often sharpens focus in retrospect. Back then computer graphics, being comprised of large brightly colored pixels, had not yet entered the uncanny valley; the Internet was dewy fresh, its promise to "only connect" unclouded.

"Root networks and currency systems, collective electric circuitries and life cycle patterns convey the impact of humanity as technology and capitalism erodes into abstraction," the arist writes in summary. "Nature invades, healing its wound only by changing shape."