Threshold: The Crisis of Western Culture 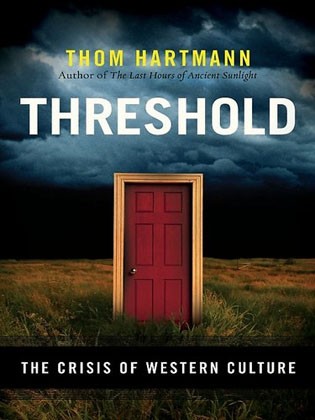 Doomsday prophets are rarely so optimistic as Thom Hartmann is in his new book Threshold. Listeners familiar with his syndicated talk-radio program (on KGOE 1480, 9-noon) know Hartmann to be an infectiously positive person. Despite how hopeful Hartmann is, he defines three major boundaries Western Civilization will erase, ecological, economic and population thresholds that make the possibility for a future with the same standard of living we now enjoy something of a dream. Thus we must seriously reexamine the fundamental causes that speed up our decline.

According to Hartmann, we've caused this crisis because our belief systems have separated us from nature; we believe in an "inherently amoral" lassie-faire capitalism; women have less than an equal share of leadership and governance; and we deliver democracy directly from the barrel of a gun. These "mistakes" Hartmann identifies are not wholly separate issues to be worked out in isolation. They are large, cultural issues that can take generations to correct. Interestingly, to identify such large problems, Hartmann uses Maslow's hierarchy of needs and places a threshold above safety and below social needs to show how we can identify the way our culture started ignoring its mistakes.

In perhaps the most intriguing portions of the book, Hartmann illustrates with clear, direct narratives how our collective belief systems serve to keep Westerners ignorant of our symbiotic relationship with the rest of the natural world. Including examples of how democracy is an inherent natural system found in animal groups, Hartmann argues that the major western religions must stop telling stories that allow their adherents to see themselves as a separate and special part of creation.

Because the problems we face are large and sometimes very abstract, the solutions are also sometimes vague and almost as inapproachable as any other abstraction. We don't pass ideas walking down the street; we only see their hosts -- ourselves. The first thing that must change, then, is our own individual perspective of this world. We can change the world, Hartmann argues, by reaffirming our identity as Americans. Because this nation is based on an idea, not ethnicity or any other exterior identifying factor, Hartmann argues the idea of America is "a powerful one, particularly inasmuch as it's rooted in the sorts of egalitarian system so many pre-civilization cultures found to be most politically and ecologically sustainable."

The perennial optimist, Hartmann challenges us to seriously rethink what it means to be an active member of American political dialogue. Active members will tell stories reconnecting us with the natural world, empowering women, limiting the growth of cancerous capitalism, and ultimately allowing democracy to develop as a natural process securing human needs.