Thronging to the Inaugural

‘You’re crushing children!’ one cop shouted. ‘What kind of people are you?’

Slideshow Thronging to the Inaugural 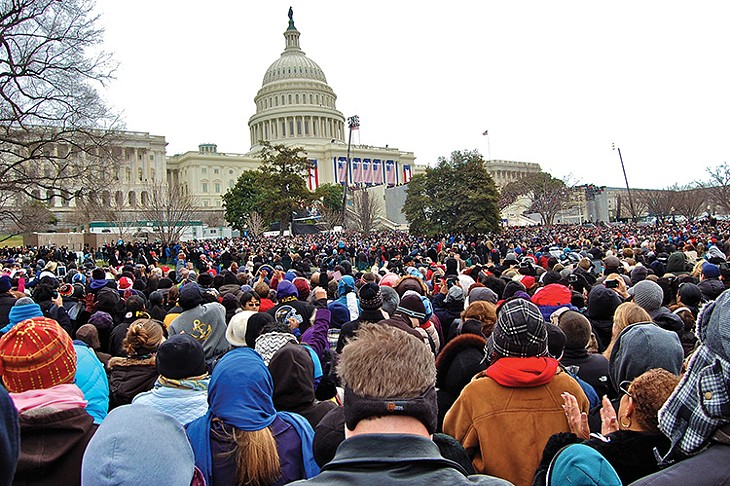 People weren't kidding about the cold or the crowds or the miles we'd walk. Get there early, they advised. I meant to, had planned on catching the Metro at 4 a.m., when the trains started running, but in my tiredness, I'd set the alarm for 3:15 p.m. instead of 3:15 a.m. I woke up sans ring and an hour late, jet-lag fog giving way to panic -- we'd never get close now.

When I'd won two tickets to the inauguration from the office of our new U.S. congressman, Jared Huffman, I hadn't been sure about going. Notice was short -- the office contacted winners one week before the event -- and flights to D.C. were pricey. But one friend offered his airline miles, another invited me to stay with her in Fairfax, Va., and the Journal dangled an assignment that would cover gas to PDX and back. How could I refuse?

North Coast Journal Calendar Editor Andrew Goff tagged along to take photos and, we all hoped, be inspired to bring back Seven-O-Heaven. If that happened, I figured, any expense and the short time away from my regular job with Ocean Conservancy would be worth it.

From my friend's house to the Metro station is an easy jaunt -- or rather, it looked simple enough on the map. In reality, we missed a turn and ended up two stations down the line. Another delay.

We pulled into the Federal Triangle Station around 5:45 a.m., joining tens of thousands of people jostling toward the U.S. Capitol building. We exited the station into 28 degrees of frigid biting through our clothing. I'd expected a chill and had worn thick tights, tall boots, a scarf and wool gloves in addition to my long coat and obligatory cute skirt and shirt. On a map, the distance between the station and the Orange Gate appeared short. Getting there looked simple. When I asked inauguration volunteers for directions, they helpfully pointed us the way. Except they didn't point us the same way. And most of the streets surrounding the Capitol Building were blocked off, so we ended up stymied time and time again. Finally we called in the military.

The gray-haired camo'd guy we asked for help clarified the deal to us: "Listen to me. There's no other way to get there other than what I'm going to tell you. Understand?" Yes, sir. He informed us we had to retrace our steps and go all the way around the blocked-off parade route. "You got about a four-mile walk ahead of you."

He was mostly right. His instructions were spot-on, and I'm sure we strode at least two miles. But then, we were saved, in true American form, by ingenuity and enterprise -- specifically the ingenuity and enterprise of a fleet of pedi-cabs, one of which we were able to flag down. Our driver waved us into the back and launched toward our destination, confidently weaving around pedestrians, cornering around official vehicles and dodging whatever popped up in our path. He was in from Texas, where he usually makes a living pedi-cabbing post-football game crowds back to their cars. In a few minutes, we'd reached our destination. A glance at the phone said 7:30 a.m., half an hour after the gates had opened. We merged into the crowd under a sky streaked with pink and orange, remnants of a glorious sunrise.

Theoretically we were in line, but in reality it was more of a crush. I clung to Goff's elbow as he threaded ahead. First, getting through the gate. Next, getting through security. The whole ordeal was similar to catching a flight, if that flight was overbooked, about to depart and only took off once every four years.

We hustled to the next checkpoint, the actual entrance to the grand event. A cop, short and stout, announced to all ticket-holders that we were being diverted to the "overflow area." People complained and tried to dodge through, but she refused any and all pleading. Other cops escorted dozens of people to the grassy area outside of the assigned space until disappointment and complaint surrounded us. "It's not my fucking problem. They should have got here earlier," snapped one cop to another. "I just work here," responded a third cop, tasked with guarding the perimeter of our barricaded grounds. Dozens of people decided to leave rather than be stuck with a view dominated by a long line of porta potties and trees obscuring the action. On the upside, the quantity of people and quality of aggravation counteracted the cold.

Goff and I joined a throng of people pushing for the exit -- only the exit wasn't one, because too many people in the overflow area were refusing to move off the street and onto the grass, so the oncoming crowd had been halted until a solution could be found. No one was getting in. No one was getting out. After several minutes, the cops relented and opened the gate to our ticket-holder area. People shoved for position. A petite woman to the side of me hollered about being pushed. The cops bumped up their communication. "You need to stop hurting each other!" they said. "Everyone just move slowly!" Better behavior held forth for a moment, but too many people in too small a space in too big a hurry makes for poor restraint. "You're crushing children!" one cop shouted. "What kind of people are you?" Fortunately, the children in question made it through safely, as did Goff and I.

At last, the main event -- with an hour or so to go before anyone was going to start talking. We could see the Jumbo-tron and the perimeter of where the action was. A lot of what I'm sure was technically talented music emanated from the speakers -- the U.S. Marine Band certainly knows what it's doing, as does the Brooklyn Tabernacle Choir -- but what would have been truly inspiring would have been some music with a beat. Look, you have 800,000 cold, tired, impatient people standing around for hours. Give them a little dance party, already! Instantly create warmth, inspiration and happiness! (I'll have to float this to Huffman for the next go-round.)

The true value of attending the inauguration wasn't to see the lawmakers and power brokers -- not that I wouldn't have hung out with Michelle, Barack and Uncle Joe if asked. The reward of the day came from standing with our fellow Americans. We applauded when those who pleased us descended onto the big screen -- Bill Clinton, Jimmy Carter and Kelly Clarkson -- and all around us boos broke out when Newt Gingrich and Paul Ryan's faces lit up the Jumbo-tron.

When Richard Blanco ensured that poetry has no chance of breaking into popular culture for the next few years, the combination of pain while he spoke and relief when he stopped appeared universal. When Obama delivered his inauguration speech, I cheered along with all the other women at the line about equal pay. My heart and the hearts around me rejoiced at his strong words supporting gay marriage. We caught our collective breath at the mention of Newtown. We burst into applause filled not only with joy of the moment, but relief that the election in November had swung our way.

Our time in D.C. was brief, but the experience was huge. We thought we'd planned well and were instead nearly overwhelmed with unexpected challenges, barriers and bad directions. Yet we ended up helped along our course by authorities and innovators, finally reaching a place where unity and hope didn't seem impossible. I can't think of anything more American.