Bugs from long ago

About 30 years ago, I was riding my mountain bike in the desert north of Reno when I saw a large, shiny insect climbing up one of the sage bushes. I stopped, emptied the little container I kept full of bike tools into my pockets and collected it. By that time, I'd almost given up collecting, but this was a remarkable specimen. Its large back legs indicated it was a member of the order orthoptera, which contains grasshoppers, crickets, katydids and their kin. The large saber-shaped ovipositor (egg laying structure) indicated it was a female.

It was easy to find her identity, a member of the family of shield-backed katydids. Precisely, a Mormon cricket (Anabrus simplex), an insect whose numbers can reach plague-of-locust proportions in some years. In 1848, an infestation threatened to destroy the wheat harvest in the Salt Lake area. The crop and the fledgling Mormon community was saved by gulls miraculously arriving and eating the invading insects in mass — hence their name.

I hadn't seen another specimen until 20 years later, riding across Nevada and Utah when an outbreak was under way. In places, hundreds of them got crushed making patches on the road slippery. I think once one got crushed, it attracted its relatives who, in turn, got crushed on the road for their cannibalistic tendencies.

Yesterday I carefully removed the old specimen from the last display frame I have left to photograph her. One photo and the pin I had her on slipped from my tweezers. She ended up in dozens of tiny pieces, so I decided to immortalize her on the web. 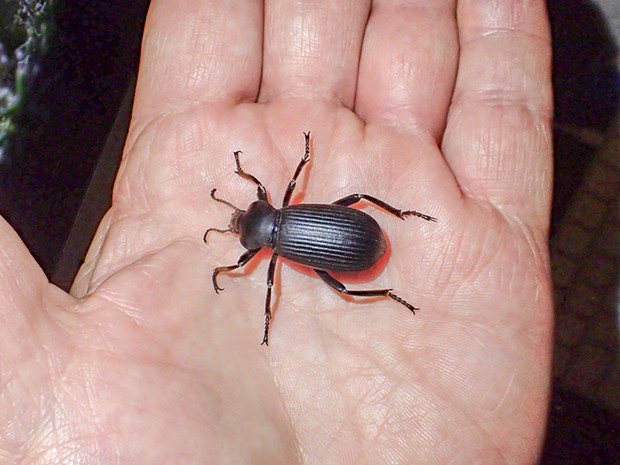 The sound of the rain had stopped and I was all ready to go out and capture a photo of the spider that eluded me the night before. I got all loaded up with cameras and gear, dressed for the cold, went to the back door, turned on the light and there was a world of white. Even the dogs didn't want to go out. So, rather than freeze looking for a critter who was probably hiding from the cold under the shingles of my pump house, I decided to stay in and work on one of those challenging focus-stacked images.

Darkling beetles are one of the larger beetles in our area. Tanks of the bug world, they are armored with a shell hard enough to resist being crushed. When threatened, they assume a butt-in-the-air posture and emit a foul smelling liquid. Even chickens seem to leave them alone. Other than that, they're pretty harmless, subsisting largely on decaying vegetable matter and manure. The specimen I have was collected in Eastern Oregon on a farm. There were a great many of them bumbling along every evening last summer.

If, like me, you dislike mosquitoes, I suggest emptying out any flower saucers or other places standing water can collect. Characteristically, as adults, they don't travel far from where they emerged so reducing the numbers of their larvae can reduce the numbers locally. Laying their eggs on stagnate water allows the larvae to develop unmolested by larger predators like fish. If your container is too large or heavy to move easily, there are several dunks and granules you can add to the water to render it unlivable for them. Many are based on the bacterial toxin BT (Bacillus thuringiensis), a natural soil bacteria.

Read more of Anthony Westkamper's HumBug on Sundays at www.northcoasthournal.com.