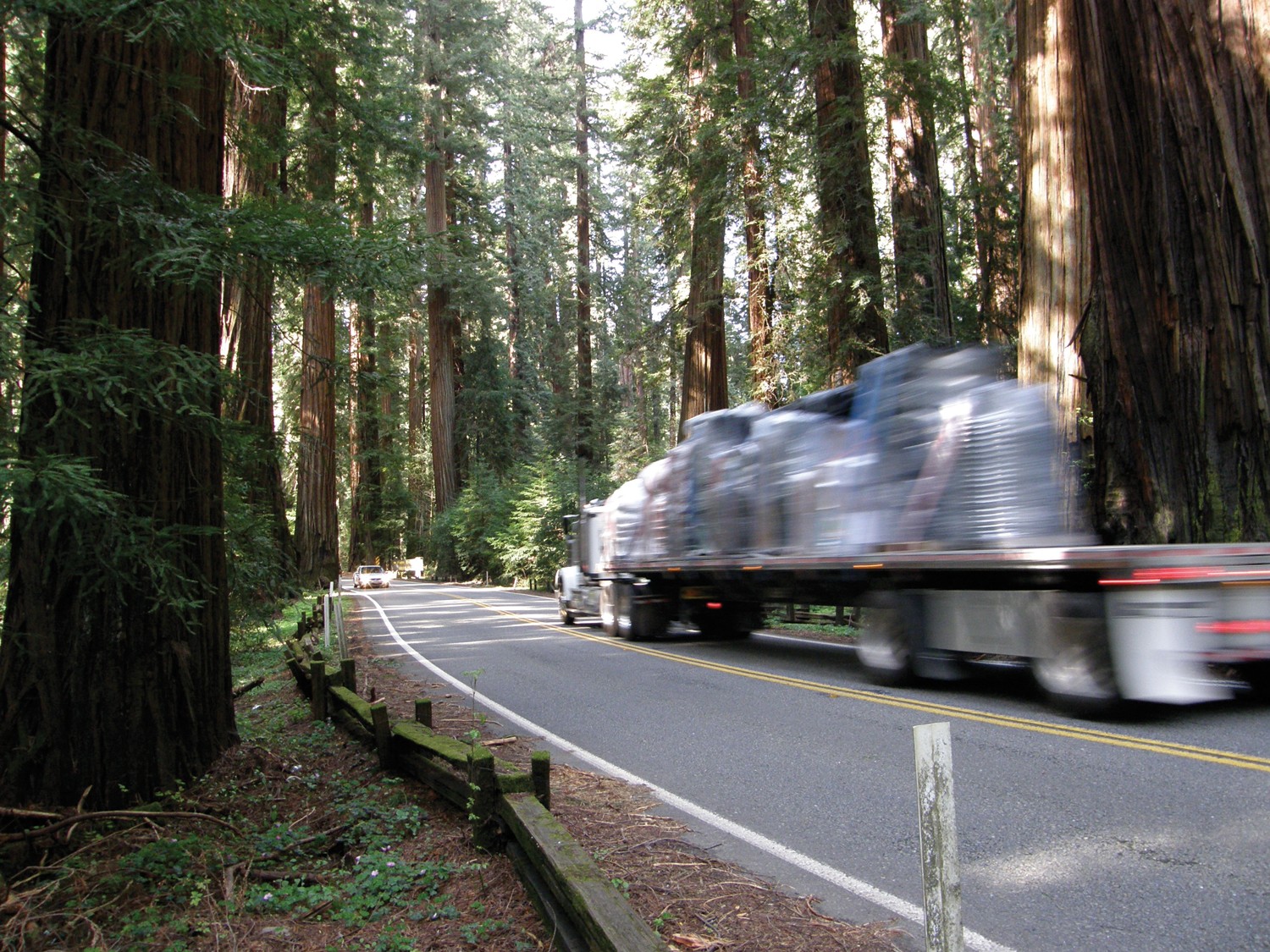 McKinleyville trucker Randy Jones is opposed to widening Hwy. 101 through Richardson Grove, but it's not the trees he's worried about; it's his business. His trucks are the right length to navigate the stretch as is; realigning the road would allow big company rivals into Humboldt County.

The California Department of Transportation (Caltrans) project remains on hold after an environmental coalition asked a federal judge in San Francisco for an injunction last week, pending the outcome of a lawsuit the group filed last year.

The stated goal of the project is to make Humboldt County accessible from the south to industry-standard trucks, which are currently prohibited on the curvy stretch through the grove because of length restrictions -- 65 feet for single trailers, 75 feet for doubles. Caltrans plans to realign several stretches, moving the highway in some places and widening it by as much as a lane's-worth elsewhere. Caltrans would have to remove more than 40 non-redwoods -- mostly tanoaks, maples and bay laurels -- and cut and pave over the roots of some of the ancient redwoods that stand next to the roadway.

Most of the controversy surrounding the project has focused on the environmental impacts, with opponents predicting adverse effects on old growth redwoods and the larger ecosystem while Caltrans and other project proponents cry nonsense, saying the project would scarcely touch the trees (see "Roads and Redwoods," April 8, 2010).

Meanwhile, a separate debate rages among the men and women who actually drive trucks through the grove. Some welcome the restrictions as a buffer against the outside world while others see it as a harmful barrier. Jones, owner of Randy Jones Trucking, falls into the former category.

"As soon as they open that up you'll get the bigger trucks in here," he said. The current industry standard is a 53-foot trailer with a sleeper cab, which together exceed the length limit. However, these longer trucks offer a better value for large-volume customers than those in Jones' fleet -- more space means fewer trucks needed to ship the same amount of goods. So Jones' competitive advantage exists only while those bigger trucks are forbidden from passing through Richardson Grove.

"We've adapted to this area. All this equipment we've bought, it's not gonna be worth anything," he said. "We're barely surviving now, with rates the way they are and gas prices." If the project goes through, Jones said the eight or 10 people he employs might be left looking for work.

Shirley Brown, owner of Shirley Brown Trucking, echoed Jones' sentiments. "The more trucks, the more competition," she said. Brown used to manage a fleet of trucks, but the recent economic downturn forced her to downsize. She sold off the trucks and her office, and now works out of her home, brokering transportation deals.

Brown finds the big rigs intimidating for another reason. "I don't wanna be on the road and run into those big-ass trucks," she said, laughing. "They scare me, and I'm in the business."

Other local truckers stand to gain from the realignment. Mike Mitchell of Redwood Coast Trucking navigates log trucks -- called log bunks -- through the grove. He wouldn't mind having a little more wiggle room. "We're for it," Mitchell said. "Oh yeah. You betcha." Since his company drives mainly log bunks, it isn't likely to encounter direct competition from outside truckers.

Gary Alto of Alto Brothers Trucking is more ambivalent. "Safety-wise I think it needs to be done," he said. "Is one tree worth one life? I don't think so."

As for the business side, Alto's not too concerned either way. Alto Brothers already uses one 53-foot trailer, which can be hitched to a short tractor and still come in under the 65-foot limit. For his purposes it's not length restrictions but the 80,000-pound weight limit in California that confines his shipments -- even his shorter trailers reach that threshold. "It's not gonna help us hauling wood products," Alto said. Those who do stand to benefit, he said, are big box retailers, because a longer truck makes a big difference when you're hauling lightweight items like potato chips and toilet paper.

Dwayne Reichlin, board member and former president of the Hambro Group, said the Richardson Grove project has a direct correlation with the cost of living on the North Coast. The Hambo Group, which includes Humboldt Flakeboard Panels, Inc., and trucking outfit Snoozie Shavings, Inc., has struggled to compete with companies along the I-5 corridor because of the increased cost of shipping to and from Humboldt County.

"We're trying to get all the major arteries in Del Norte and Humboldt opened up to [standard-length trucks] so that we can be competitive," Reichlin said. He's not sympathetic to those benefiting from the current restrictions. "They call themselves specialty haulers," he said. "They think they've got a captive market. That's just B.S. in my opinion."

Reichlin believes that without the road widening, declines in the larger economy will come back to bite such "specialty haulers" in the long run. "There's going to be fewer products going out, and those guys are going to have to drive out of Humboldt to get products to haul in," he said. At that point, he said, they'll want to be able to compete with the big companies.

Ultimately, Reichlen believes that opening up Richardson Grove would save Humboldt County businesses millions annually and lower the cost of living here for the average person. "We're looking at saving money in this country," he said. "Let's do something that makes common sense."