Gordon-Levitt meets his future as Birbiglia sleepwalks into stuff 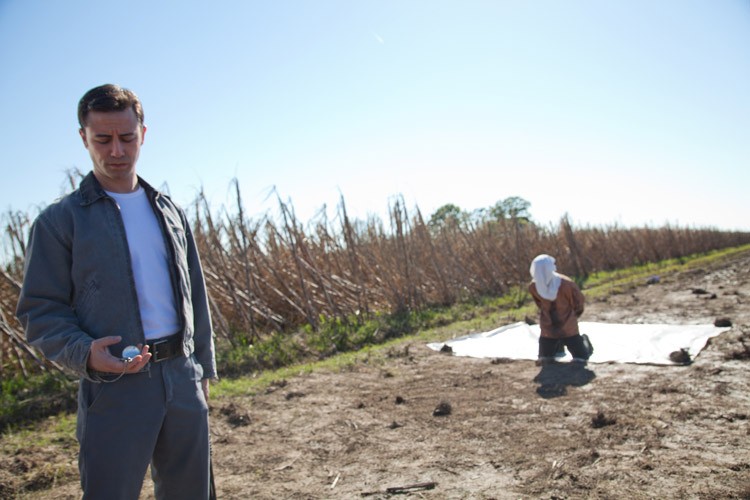 LOOPER. Rian Johnson's image of the future is a familiar one, riddled with immense poverty and constant, thoughtless violence. In Looper, Johnson, whose previous directorial efforts include Brick and The Brothers Bloom, focuses less on the details of his futuristic world and more on the abstract possibilities it offers.

Set in Kansas (presumably because the plot required a really large field) in the year 2044, Looper is a semi-cerebral story that hinges on time travel. Joe (Joseph Gordon-Levitt) is a looper, paid by the mob from the year 2072 to assassinate the men they send back to 2044. With me so far? Good, because once you accept that premise, the rest of the plot comes easily.

Loopers make a good living, with only one caveat: Eventually they will have to close their own loop by assassinating the older version of themselves. Most loopers accept this condition, pull the trigger, and start the countdown on their remaining 30 years. For Joe, it's a bit more complicated.

When Old Joe (Bruce Willis) materializes on Young Joe's killing tarp, he takes matters into his own hands, thwarting Young Joe's efforts and setting a general avalanche of shit into motion. While Young Joe works to track down his older self and finish his job, Old Joe is working to kill a telekinetic child who will one day take over the world. Moral dilemmas abound, and you find yourself rooting for the lesser of two evils: Young Joe.

Johnson deserves points for creativity, but Looper could have been so much more. I was longing for something to keep me up all night, akin to Inception or Pi. Time travel plots can open up so many doors, but Johnson purposely sidesteps these opportunities. The moment Willis proclaims, "I don't want to talk about time travel," you realize the film is only going to dive to a certain depth. It takes the wind out of your nerd-sails.

A great deal of effort was put forth by the effects department and by Gordon-Levitt to ensure that Willis can pass for Gordon-Levitt's future self. Their cadences and mannerisms are the same, as are the bridges of their noses and the density of their brows.

Despite the attention given to these sorts of minute details, Looper is still full of little holes. They have less to do with continuity than with believability. It's impossible to go into too much depth about these flaws without slipping into dangerous spoiler territory. Looper has so much potential and is truly entertaining; but Johnson, whose previous movies were much smaller in scale, may have been out of his depth here. R. 118m.

SLEEPWALK WITH ME. I've expounded on the dangers of adaptations before; they're tricky and almost always end up as a severely abridged version of the original story. Sleepwalk With Me, written by Mike Birbiglia and co-directed by Birbiglia and Seth Barrish, is an adaptation of a different sort, though. Birbiglia's usual medium is the stage, or at least the microphone. You may be familiar with his work from This American Life. Maybe you own one or more of his stand-up albums. Or maybe you have no idea who he is. Regardless, there will undoubtedly be something in Sleepwalk that appeals to you.

It's a simple story about a man with an REM behavior disorder, the girl who loves him and the family that drives him crazy. Based on the spoken-word story of the same name, Sleepwalk is a painful and hilarious true story about Birbiglia's experiences with somnambulance, and the steps he took toward becoming a stand-up comedian. There are no unexpected dramatic twists or turns; there's hardly even a rise and fall. It truly is a simple story, though this simplicity is in no way limiting. Birbiglia's forte is using his awkward charisma to give you just a glimpse of his life, those fractured, human pieces that make up the whole.

Filling the dual roles of key player and narrator, Birbiglia plays a pseudonym-shrouded version of himself, Matt Pandamiglio. Lauren Ambrose (Six Feet Under, Wanderlust) is Abby, the girl who loves him in spite of his many, many faults. Their eight-year relationship has no apparent direction, and Abby has grown restless waiting for Matt to take the next steps (marriage, kids, not being a bartender, etc.). The combined tension from his relationship, his career and his overbearing family becomes tangible for Matt in the form of sleepwalking.

Matt's particular brand of sleepwalking is intense, categorized as REM behavior disorder. Essentially, if he dreams it, he does it. Running from a jackal, winning the Dust Buster Olympics, eating a pillow made of pizza -- you name it, he acts it out. The bouts of sleepwalking become increasingly more dangerous (and admittedly more hilarious).

These sleepwalking scenes are, by far, the most entertaining aspect of the film. Sure, it's wrong to laugh at someone else's pain and impending danger, but there is a pizza pillow. The rest of the film may have floundered had it not been for the supporting cast, which includes Louden Wainwright III, Marc Maron and Carol Kane. As Birbiglia's freshman work as a director, Sleepwalk With Me exceeded my expectations, which bodes well for any future film projects Birbiglia may have in the works. Not Rated. 90m.

TAKEN 2. Liam Neeson returns as the retired CIA agent whose family keeps getting targeted by hostage-takers. This time, he and his wife get nabbed, prompting a succession of quick-cut action sequences and tense music. PG13. 91m.

PITCH PERFECT. Yes, the trailers look like Glee Goes to College, and the catchphrase ("Get pitch slapped") is a groaner. But the cast is led by the great Anna Kendrick, and the reviews have been solid. Your call. PG13. 112m.

FRANKENWEENIE. Tim Burton revisits one of his early short films in this stop-motion (think Corpse Bride) feature about a boy who uses zippy-zappy science to bring his beloved dog back from the dead. PG. 87m.

Friday is Ocean Night at the Arcata Theatre Lounge, and this month's edition features award-winning shorts from the Beneath the Waves Film Festival. Sci-Fi Pint and Pizza Night falls on a Saturday, for the first time in patchy memory, featuring George Romero's landmark zombie classic Night of the Living Dead (1968) and a Mexican sci-fi/horror called The Robot vs. the Aztec Mummy (1958). Sounds like a fair fight. And on Sunday evening at 6, Teenage Mutant Ninja Turtles (1990) will fight crime with help from their ninja master, a giant rat named Splinter.

DREDD 3D. In a dystopian future, badass cops act as judge, jury and executioner. This stylized remake has brio and action to boot. R. 95m.

END OF WATCH. Jake Gyllenhaal and Michael Peña star as hero beat cops of the LAPD who get targeted by the Mexican drug cartel. R. 109m.