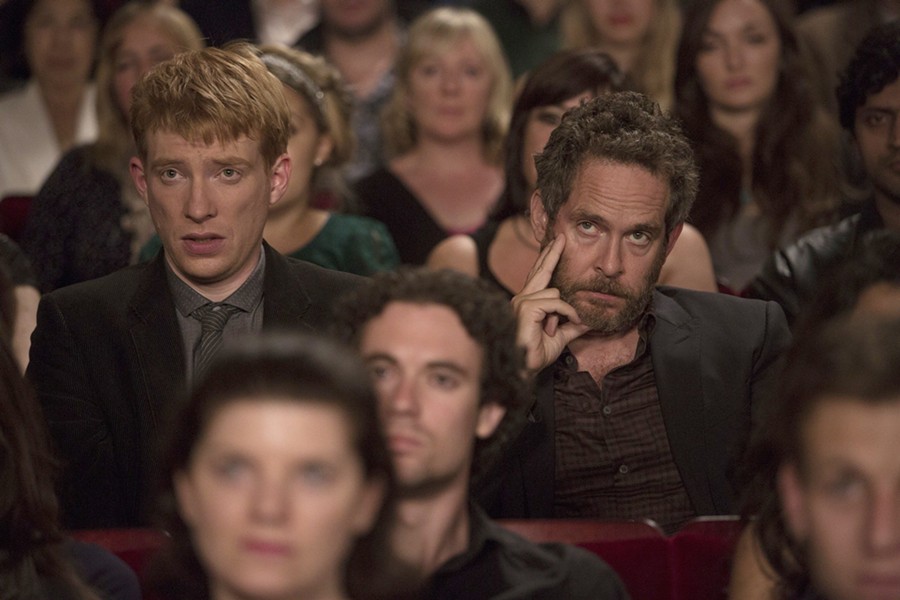 ABOUT TIME. I like Rachel McAdams and dislike most of her movies in nearly equal measure. Not that she picks bad projects, but she tends not to stray from the very-beaten path of romantic comedy. And it is a rare rom-com indeed that satisfies my weird predilections. I harbored some hope for About Time, since I like time travel movies even more than I like Rachel McAdams. But it turns out the time travelling is just a crutch for an ambitious but ultimately legless rom-com rehash.

After 21 idyllic years of comfortable seaside living, Tim (Domhnall Gleeson) is informed by his dad that he, like all the men in the family, can time travel. Tim resolves, basically, to use this jaw-dropping new talent to pick up chicks (he makes it seem innocent, but I calls 'em like I sees 'em). It's rough going as the newbie learns the ropes, but eventually he meets Mary (McAdams), decides she's THE ONE, and dedicates himself to winning her over. He uses his temporal shiftiness to learn enough about her to create a compelling web of lies to ensnare her. (The context would have us believe these are white lies in service of true love. I am probably too cynical for most love stories).

Anyway, Tim's gambit pays off and he and Mary settle into a rich, loving life together. But life, even in this manipulated universe, refuses to bow to simplicity. Tim's little sister finds herself skewered by a bad relationship and her own self-destructiveness, and he attempts to smooth things out. Hard lesson time as our protagonist learns the distinct limitations of his genetic anomaly.

Writer/director Richard Curtis is a seasoned rom-com vet — he wrote, among many others, Four Weddings and a Funeral, Notting Hill, and Love Actually — which is a mixed blessing. On the one hand, About Time is designed and assembled with distinctly above-average proficiency. On the other hand, decades of bad romantic comedy habits must be hard to break, because this movie is reminiscent of Curtis' earlier work and the dozens of imitators it has spawned.

Still, Gleeson and McAdams muster up convincing chemistry, although I find it a stretch that Mary is supposed to be somehow plain. And there are moments scattered throughout that encapsulate the scary electricity of new love. The supporting cast, especially Bill Nighy as Dad and Tom Hollander as family friend/drunken curmudgeon Harry, create a welcoming, homey atmosphere. But About Time fails to capitalize on a promisingly inventive scenario, devolving by the end into a disappointingly conventional, if occasionally touching, romance. R. 123m.

THOR: THE DARK WORLD. I didn't think much of Thor the first time around, and I can't help the feeling that this is just more of the same.

Even summing up the plot gets convoluted quickly, but I'll try to be brief. Some ancient enemies of Asgard need some mystical dark matter called Aether to create a cataclysm that will cast all the realms of existence into darkness. Thor's (Chris Hemsworth) would-be Earth-girlfriend Jane Foster (Natalie Portman) happens to stumble across the aforementioned Aether because, of course, she does. The big guy flies down to Earth to help her out, then does some dimension hopping, then returns to Earth for a climactic battle.

The plot, while needlessly complicated, is somehow also painfully underdeveloped. Characters pop up without preamble, and then disappear. Things are constantly happening on screen, but none of those things feels like a story. Visual effects and set pieces are deployed rampantly, but they can't conceal the dearth of viable ideas that ankles the movie from the get-go.

I like the winking humor Hemsworth brings to the title character, and Tom Hiddleston's Loki is always entertaining. Likewise Kat Dennings as Jane's assistant. Beyond that, I can't find much to recommend Dark World. Maybe it's the awkward mix of Norse mythology in a contemporary setting, or the implausible love story. Whatever the reason, this one just isn't as smart as it thinks it is, or as fun as it needs to be. PG13. 112m.

12 YEARS A SLAVE. Chiwetel Ejiofor is a free-born American sold into slavery in this period piece based on a true story. With a sinister Michael Fassbender. R. 134m.

BAD GRANDPA. Jackass ringleader Johnny Knoxville entertains as an old guy hitting the road (and everything else) with his grandkid. R. 92m.

CLOUDY WITH A CHANCE OF MEATBALLS 2. The 3-D sequel goes a little Dr. Moreau when food creatures populate an island and hero Flint (Bill Hader) has to stop them. PG. 95m.

ENDER'S GAME. Young genius Ender (Asa Butterfield) is tapped by the military elite to save the planet from alien bugs in this entertaining adaptation of the cult novel. PG13. 114m.

FRUITVALE STATION. Michael B. Jordan's fine performance and Ryan Coogler's writing and direction cut through the rhetoric for a humanist dramatization of the final day of Oscar Grant III, who was killed by police in an Oakland BART station. R. 85m.