Timeless Dance from Cuba and Beyond 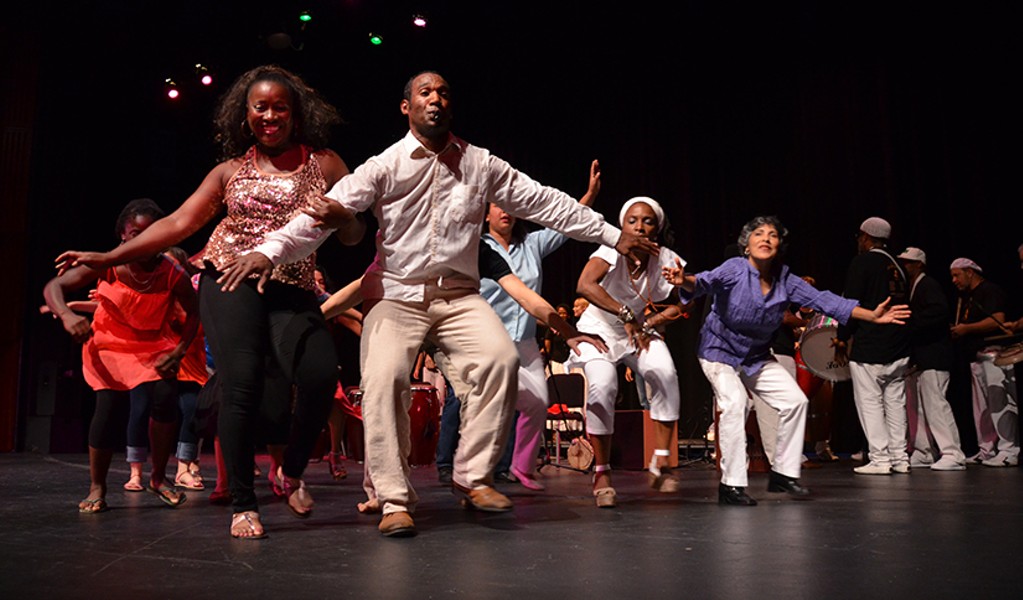 This weekend presents the opportunity to travel from the evolving landscape of movement that is being called "new dance" all the way back to the ancient roots of Afro-Cuban dance and drum. On Friday, Synapsis in Eureka presents Leslie Castellano and Like Houses Through a Kaleidoscope, a dance and acrobatic stilt performance by two nomadic artists who call themselves Moitié Moitié. Over on the more traditional side of the dance spectrum, HSU's annual Explorations in Afro-Cuban Dance and Drum workshop culminates in a star-studded faculty concert at the Van Duzer on Saturday evening.

In the realm of the new, any venture that movement artist Leslie Castellano is involved in is worth a look-see. Whether she is presenting her own work or another's in her performance/studio space Synapsis, located in a warehouse on the Eureka waterfront, the experience will dig into perceptions of what dance, movement and physical expression ought to be doing. "New dance" is an umbrella term that encompasses circus skills, like acrobatics, aerial silks, hoop, stilt-walking and fire dancing that are transforming the contemporary dance world, along with physical theater (à la our own Dell'Arte) and spoken word. Add contact improvisation, a form developed in New York City in the '60s, when dancers were rejecting formal dance like ballet to experiment with movements like walking, running, skipping and rolling on the floor. Then add stuff that's yet to be defined. You'll get some version of "new dance" and a breed of artist, like Castellano, who is searching for something beyond artifice or decoration, something that speaks to the apocalyptic era we all inhabit.

Following Castellano's piece will be Moitié Moitié, the duo of Isabella Kirouac of Canada and Lea Kiefer of France, urban nomads who have been touring the world for many years while teaching at international contact improvisation festivals. Throughout their travels and dancing, they have created identities from the gestures and movements they inhabit and the memories of all the people and places that have sheltered them. Moving on stilts, which are sometimes attached to both their arms and legs, creates a vulnerability as the women build mobile houses out of scraps of material. They carry these homes on their backs like turtles with only a shell between their soft bodies and the world. But where is home in this rushing world with so many goodbyes and distances in between? Kirouac and Kiefer seek out home through one another in their new piece, Like Houses Through a Kaleidoscope, pushing past the boundaries between contemporary dance, physical theater and acrobatic stilt work.

Like Houses Through a Kaleidoscope, by Moitié Moitié, with an opening solo performance by Leslie Castellano and post-performance concert by Medicine Baul. Friday, July 26 at 8 p.m. at Synapsis Performance and Art Space, 47 West Third St., Eureka. Tickets $10 at the door. For more information, including on a contact improvisation workshop taught by Kirouac and Kiefer, email Leslie Castellano at muppet33@gmail.com or call 616-3104.

Dance, voice and drum are connected in the farthest reaches of human memory. Some of the oldest songs and dances that were outlawed during colonization in America and Africa survived as part of Cuban culture. Since 1996, the Extended Education arm of HSU has presented a week-long intensive packed with classes celebrating the folkloric music, songs and dances of the Afro-Cuban people.

In the late '70s, local teacher and author David Peñalosa began teaching a group of conga drum students in Humboldt County, including the founder of the Afro-Cuban workshop, Howie Kaufman.

In the '80s, and because of travel restrictions to Cuba, a few of the drummers went to Tijuana to study with Afro-Cuban drummers and dancers. "It was cheap," says Kaufman, who is a lecturer in the HSU music department, "We stayed in the same hotels with the Cubans and had parties and private lessons at night." Kaufman based the Explorations in Afro-Cuban Dance and Drum workshop on the Tijuana model, inviting locals and out-of-towners to spend a week each summer immersed in Afro-Cuban folkloric culture on the HSU campus. And so, Afro-Cuban drumming and dancing found its way north from the Caribbean and up past the Redwood Curtain.

The highlight of the intensive, the closing performance, features the instructors, whom Kaufman calls, "the cream of the crop ... the Miles Davis, John Coltrane and Thelonious Monk of the Afro-Cuban community." Singers Lázaro Galarraga and Lázaro Pedroso join a Who's Who of drummers including Roman Díaz, Ramon "Sandy" Pérez, Rogelio Noño Kindelan, Jesus Diaz, Miguel Bernal Nodal, Michael Spiro, John Santos and Octavio Rodriguez Rivera.

The concert opens with sacred dancing and singing to the Orishas, divinities of the Yoruba culture with origins in Nigeria. A battery of drummers and a chorus of singers accompany solos by master dancers Susana Arenas, Danys LaMora Perez and Silfredo La O. Arenas, who began studying at age 12 at the Casa de la Cultura in Matanzas, will dance in a white, voluminous costume adorned with sequins and a crown to evoke the deity Obatala. Arenas uses a variety of steps that have been passed down for generations, but from the waist up she will use movements to convey different aspects of the Orisha. Because Obatala is supposed to be a very old man, she may move slowly or use a cane.

Rumba, the national folk music and dance of Cuba, is heavily featured in the intensive and will also be on the program. Cuban rumba is not what you see in ballroom competitions. Usually a duet between a man and a woman, this style of rumba, based on a five-stroke pattern, is a syncopated flirtation. It's a seduction and a chase — the partners dancing close together with tight movements and breaking apart to attract each other from afar. Much of each year's show depends on what music and dance inspiration has sparked between the artists during the week of playing and dancing together. As Kaufman says, "all the faculty learn from each other," which makes for compelling interaction on stage. The grand finale is a Mardi Gras carnival piece in which the workshop students are invited to join their teachers on stage in a joyous cavalcade of hip swinging, skirt swishing, shoulder rolling and foot moving along with the endless rhythms of the drumming. Explorations in Afro-Cuban Dance and Drum Faculty Concert, Saturday, July 27 at 8 p.m. in the Van Duzer Theater on the HSU campus. Tickets $10 at the door. For more information call 826-3731 or go to humboldt.edu/afrocuban.