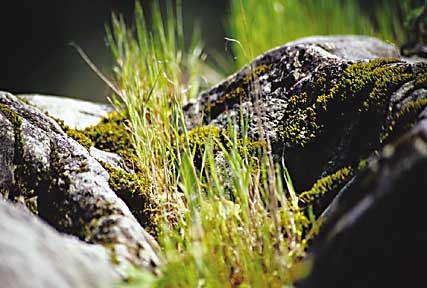 When I look at the images I pull from my camera I often find that there are pictures within pictures. I can crop the image and find two, three, even five powerful images within one frame. As a photographer and a reveler of beautiful natural areas it is easy to get caught up in grand sweeps of landscape. We train ourselves to discern the subtle harmonies between sky and jagged ridgeline and to anticipate the waxing of color on clouds and cliffs. To expand this haltingly expansive view I have found inspiration in some likely, as well as unlikely places.

James Balog, a photographer who has worked extensively with National Geographic , was engaged for a time here on the North Coast, shooting one massive redwood in Prairie Creek from the top down. With the help of local botanist Steve Sillett, he rigged ropes from the upper canopy to the ground and took pictures every few feet of the descent, looking directly across at the tree. After days of hanging from his rope to shoot and many more days needed to seamlessly paste the images together, he had a view of a redwood that was not possible to see normally. So working the other way, pictures within one image, Balog found and shared a new way of seeing.

As a kid, one of the rare moments I sat still and rapt was on a ride at Disneyland that I think is now long gone (it made way for dancing aliens, or something). The ride was uncharacteristically slow, and narrated by a Rod Serling-type voice. Essentially the idea was to trick you into thinking that you were getting smaller and smaller, as you were pulled past 10-foot-tall glittering snowflakes and into the heart of an atom that was now visually huge. Like much of childhood memories, this too was seemingly sloughed away. Unfortunately, it did not return in high school to kindle a sputtering and sadly doomed attempt at scientific inquiry. But the memory did resurface after graduate school when I had a camera in my hand.

After graduation I attended a California Summer Arts photography workshop and was wholly inspired by one of the presenters. Larry Michaels had carved out a niche making images using his high-powered macro lens to get deep inside intricate flowers. He would enlarge a tiny section of a moth's crazily patterned wing much like a microscope would, but with the eye of an artist. Still, this admiration did little to infect my own vision, as the money needed to acquire a good macro lens was light years away and the requisite patience I imagined even further.

I have visited scores of beautiful public lands throughout the Western U.S., and more than a dozen in Northern California alone. Some of these natural areas are more than a million square acres. For years, I imagined every mile I covered on trail or ridgeline as a blessing. A new way of seeing it could now take lifetimes to experience, as there are worlds within worlds just beyond fingertips and toes.

A 20-foot section can be trimmed down to a five-foot section and a single hour could easily be spent enamored and enthralled watching a single Hapropodes miserables (silver bee). Last week, I was treated to an afternoon out with Mike Messler's pollination biology class, watching female bees swim backwards while digging through the sand of the Samoa Dunes to lay eggs. There was a buzzing crescendo while the males would swoop in en masse on newly emerging female virgins. Low fog drifted onshore creating beautiful transient patterns of shadow and light over the Eureka wallflower and poppies and the tiny world on the side of a single dune.

With spring runoff filling rivers, I offered to drive shuttle for some friends who wanted to kayak the New River. I had hoped to get a sense of a new watershed, and marveled as two bald eagles soared overhead, contouring along the edges of the steep walled canyon as I waited for them at Grey's Falls. Then something strange happened. I began looking at the rocks right in front of me - the fields of lichen and forest of grass, the towering flowers living on them. I became enamored with the few square feet of crazy hydraulics within the rapid just below, the impossibly unpredictable predictability of moving water.

As my world began to shrink, it also began to expand. A welcome paradox, as there is so much more to experience. Instead of always looking up and away to the horizon, I can imagine the salamanders' view of the world. As springtime recedes the grass browns, water levels will drop again and bees will mate and die, providing me with opportunities to experience these landscapes with fresh eyes.

Somehow, just by kneeling, I feel closer to the natural world, an observer experiencing from the inside out. I imagine that over time this in turn will illuminate the inner landscape, providing increased focus and depth to the overlooked areas so often superseded by my wanderlust and nomadic tendencies find the vanishing point in the landscape. It is possible to roam for miles at the trunk of a tree with the vision of an ant. Time to shrink ourselves, smell the bark and leaves, experience textures between thumb and finger, explore valleys and ridgelines of a sequoia's skin.

So I did finally get hold of a powerful macro lens, and I have found snippets of patience to set up the tripod and explore these tiny landscapes. The more I go through the ritual of setting it up and looking through the thick glass lens, the easier it is to connect the tangled roots of an individual tree, the probing antennae of a banana slug and the buzzing of a bee to the sublimity of an entire forest.