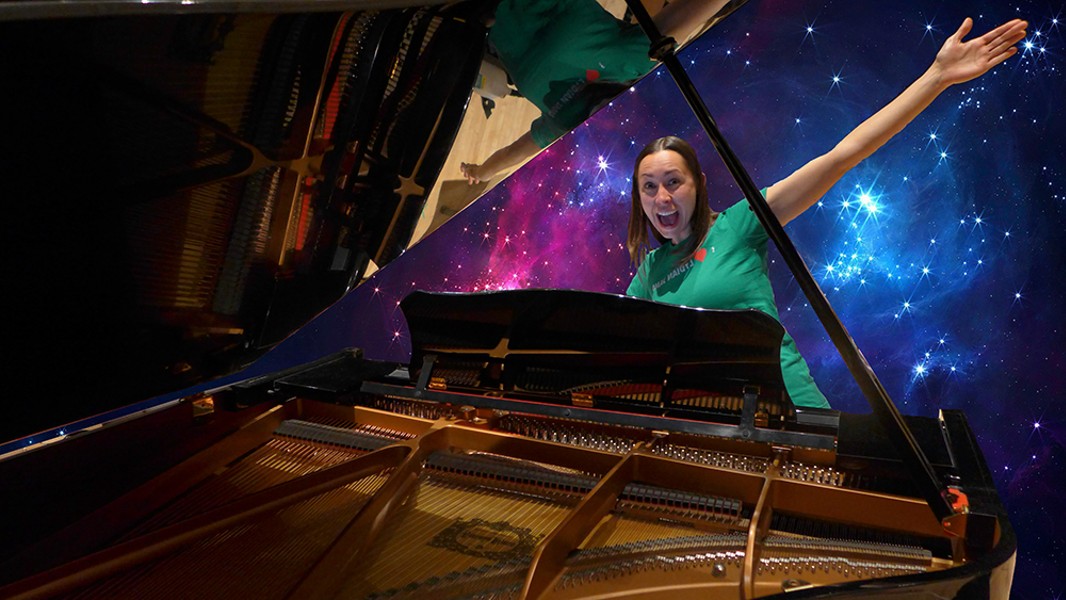 Courtesy of the artist Holly Bowling pays piano tribute to the Grateful Dead at HumBrews on Sunday, Jan. 22 at 8 p.m

To be healthy, wealthy and wise. Now not many folks know this, but music can help us achieve two of those goals, and I'll give you a half-second to ponder which one music rarely helps out with. I heard an interview on KHSU not too long ago with Jeffrey Smoller of Making Headway, which helps those recovering from brain injuries, and he mentioned a list of some of the many health and wellness benefits of music. I wasn't surprised music has positive effects; it's the reason I've chased music around most of my life. However, I was a little surprised about some of the specific benefits.

We all know that music can be relaxing and although relaxation is a goal in itself, there are a myriad of health benefits that trickle down. A study out of Austria has shown that classical music not only helped subjects relax but it helped their neck, back and shoulders. Apparently, slow rhythms can slow down our heartbeat and breathing, and lower our blood pressure. This is turn relieves muscle tension in our back, neck, etc. Soothing music can also relieve psychological tension in the mind by relaxing us and directing our attention, let's say, from the stress from people driving 50 mph northbound on 101 between Sunset and the 299 E on-ramp.

Many of us make music an integral part of our workout routines and cringe at the idea of exercising without tunes in our ears. Whether it helps you set a pace while running or drowns out the over-the-top Neanderthal grunting in your gym, there are obvious health benefits here. Music can release endorphins, which can in turn help increase our endurance. Music can also simply distract us from the pain of doing crunches.

The list goes on. Music is credited with helping with memory loss, childbirth and depression. One thing Smoller pointed out that I found fascinating is that not only does listening to music stimulate large portions of our brains, but playing music is like a full-on brain exercise igniting large portions of our "right" and "left" brains and strengthening the intercommunication between those two hemispheres. Now does that necessarily make us wise? That's a bit harder to quantify but when I think about lyrical music that comes from another person's perspective or tilts at a universal one, music can get us out of our own heads, so to speak, connecting us with the human condition and fostering a deep sense of empathy. To gain experience and knowledge from others may not be wisdom in itself but it's a first step.

The Jam in Arcata is hosting a benefit for Syrian refugee families in Greece. A good cause no doubt, and you can read more about how it got so specific in the Calendar. Helping raise funds this evening for an early 5 p.m. show is Altar Tones joined by The Brothers Norton, Arkaingelle and Ultra Secret. It's $10 for this benefit. Up in Blue Lake at the Mad River Brewery Tap Room you'll find the Compost Mountain Boys doing their things at 6 p.m. for free. For you Volkswagen drivers, take it easy when you leave the joint, OK?

It's Inauguration Day and drinking alone at the house won't make you feel any better, so get on out there and commiserate with your unpatriotic friends and remember the good things in life. See? Music can be healthy. Humboldt Steelhead Days are upon us — and have been for 19 days now — but they're holding a kickoff party tonight at the Mad River Brewery. The party gets going around 5:30 p.m. for you anglers out there (I don't even know what that means) and the music, courtesy of Cadillac Ranch will be ready for your earholes around 6 p.m. It's free to get in and you can find out more about the Steelhead Days, which goes through March if I'm not mistaken. I'm not manly enough for fishing myself, and I personally stay away from eating things that defecate where they breathe, but hey, that's just me. We do have more steelhead this time of year than anywhere else in California. And did you know that a steelhead is a rainbow trout that leaves its ocean home and comes back to the freshwater to spawn? I wonder at what point through the brackish waters of the estuaries — sounds like I know what I'm talking about huh? — that a rainbow trout can officially be considered a steelhead. Now let's say this rainbow trout crosses said salty threshold and becomes a steelhead according to us. If I were to pick that steelhead up and throw it back in the ocean, would it go back to being a rainbow trout, or would it be forever ostracized by its ocean friends as a steelhead — a fish out of freshwater?

Humboldt's own Pink Floyd tribute, Money, makes its (full disclosure: our) debut at the Redwood Curtain Brewery tonight at 8 p.m. The bass player tells me that the range typically begins in the early Syd years and works all the way up to songs from The Final Cut, but tonight after some of the hits, the band's going to pull out the entire Animals album. All that for free. At the same time, the Arcata Playhouse has Nina Gerber and Chris Webster playing some "originals, tasteful covers, soulful ballads, jazzy tunes and sweet folk." Webster is the lead vocalist in Mumbo Gumbo and Gerber has played with Kate Wolf and Dave Alvin, among others. Tickets are $15 for this one. L.A. rockers The Heavy Pets blend rhythm and blues, jazz, funk, disco, reggae and rock 'n' roll. Apparently they're not classical or oompah fans but that's still a wide range to cover. Anyway, they've been together about 12 years now and have a string of EPs out, but are in the process of recording their second LP. Catch some songs from that upcoming release tonight at Humboldt Brews at 9:30 p.m. for $10. Brother Gow opens up the show.

If you feel a hankerin' for singing with your neighbors and/or strangers, Song Village should be your destination this afternoon. Seabury Gould hosts at the Westhaven Center for the Arts at 1 p.m. This is basically a venue to sing folk songs with friends. It's free, so you've got nothing to lose except your frown. You may have seen classically trained pianist Holly Bowling the last time she stopped by Humboldt Brews. At that show, from what I recall, she was paying piano tribute to one of her favorite bands, Phish. In essence, she's doing a similar solo piano tribute thing tonight but to jam masters the Grateful Dead. So you'll probably hear "Unbroken Chain," "Franklin's Tower," and "Uncle John's Band," all given the classy treatment. She's been doing such a great job with these Dead tunes that both Phil and Bobby have invited her to jam with them. Check it out at HumBrews at 8 p.m. for $10.

I got word from Anna Hamilton that she's no longer doing her Tuesday night gigs at the Palm Lounge but has instead moved to the Clam Beach Inn on Mondays. So, seeing as how it's Monday, she'll be there at 6 p.m. tonight doing her thing for free. Check her out at the new gig digs.

Andy Powell is a congenital music lover and hosts The Album of the Week Show on KWPT 100.3 FM Tuesdays at 6 p.m. Health recipe of the week: two parts music, one part kale and one part butter