To Phrase a Coin 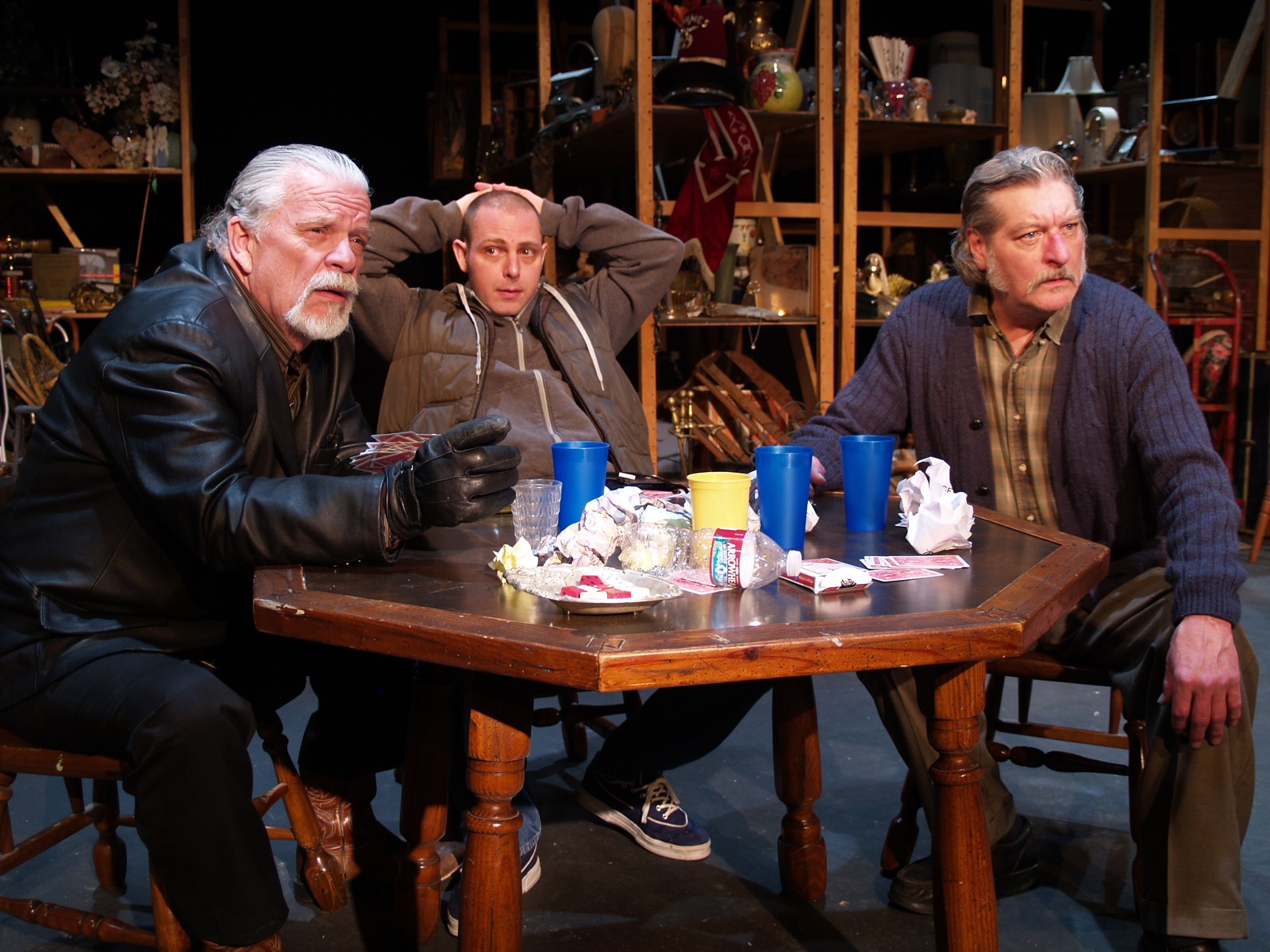 David Mamet's plays of the 1980s were warily praised as uncomfortably kinetic portraits of mostly white men jostling on the precarious edge of the American dream. His 1984 drama about a cutthroat band of real estate salesmen, Glengarry Glen Ross, won the Pulitzer Prize.

But it was his 1977 Broadway debut that first ignited controversy while making his reputation. That play was American Buffalo, which is currently on stage in an entertaining production at North Coast Repertory Theatre in Eureka.

Set entirely in Donny Dubrow's urban junk shop, the story involves a plot to steal a possibly valuable buffalo head nickel. At first Donny is set to send Bobby, his young assistant, to do the job. But Walter "Teach" Cole, a regular at Donny's nighttime poker games, wheedles his way into the action.

According to New York Times reviewer Frank Rich, the original 1977 staging (with Robert Duvall as Teach) was tense and brutal, but the 1981 New York production (with Al Pacino as Teach) revealed dour humor and spiraling absurdity. The fast pace set by director Michael Thomas at NCRT unlocks even more of the humor and humanity in the play.

These days, Mamet is polarizing for his political statements, and his most recognized recent work is for film and television. But these early plays were also controversial. His characters casually deploy ethnic and sexual slurs, sometimes in absurd combination with what is idiomatically if idiotically called "mature language" (or even just "language.")

Mamet's language (beyond but including the "language") is stylized street talk, and it's the most important element of the play. It's also basically musical, so everything depends on the rhythms. The NCRT cast ably sings the score.

There's a nice mix of vocal pitches in the three strong voices of James Read, Joel Agnew and Mike Kelly. Kelly has a way of disappearing into his roles, but his Bobby in this play is memorable. Agnew has a reputation for talking fast, and he needs that skill for the mouthy, jittery Teach, who reveals his confusion, desperation and self-doubt with every assertion. James Read as Donny has never been better, and his strong performance re-balances the play, which tended to tilt towards Teach in those first productions.

Mamet's dialogue sounds ruefully or ridiculously authentic, but like Hemingway's or J.D. Salinger's, there's artifice involved. Changing the rhythms changes the meaning. This production reveals a clownish pathos in these familiar, conflicted men as they struggle to negotiate friendship and self-interest while doggedly dodging their final failure. There's playfulness in these rude arrays of common words, denying and then suggesting that some fitful spirit and residual humanity struggles to survive.

Defining these impressions comes later -- when the play is on, it is often mesmerizing and consistently entertaining. Calder Johnson designed the set, David Tyndall the lighting, Rae Robison the costumes. Dianne Zuleger recorded some tasty saxophone licks. American Buffalo continues at NCRT weekends through Feb. 16. Reservations at 442-6278. www.ncrt.net. It's for adults -- that "mature language" and brief stage violence.

Also just opened: the musical revue Songs for a New World at Ferndale Repertory Theatre. Described as a song cycle about dealing with the unforeseen in life's defining moments, it's the first produced work of composer Robert Jason Brown. His next show, Parade, won the Tony for Best Score. His later musical The Last Five Years has been produced locally in the last three years by both the Humboldt Light Opera Company and Redwood Curtain.

Beginning Thursday, Jan. 31, Dell'Arte International School first years present Free Range Commedia (hormones added) for one weekend. Expect commedia-style "lovers, mothers, idiots, charlatans, posers, braggarts and windbags" -- though no actual members of Congress -- Thursday through Saturday at 8 p.m. in the Carlo. Admission is pay what you will but reservations are recommended. 707 668-5663 ext. 20, www.dellarte.com.

Sleeping Beauty is performed Fridays and Saturday (Feb.1-2, 8-9) at 7 p.m., and Sunday (Feb. 2) at 2 p.m. Tickets are available at the Holly Yashi store and Threadbare Dancewear in Arcata and Parasol Arts in Eureka, as well as from hloc.org.