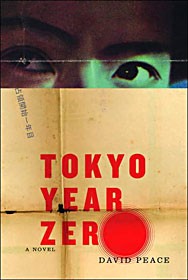 There’s nothing like an occupying army to stir desperation into the chaos of defeat. Just ask Detective Minami, chief of one of the two murder-investigation units operating in Tokyo during “Year Zero” — the first year after Japan’s surrender to and occupation by the United States.

David Peace, named by Granta magazine in 2003 as one of the best of the young British novelists, isn’t the sort of writer to gloss over grisly reality, whether it’s the gruesome task of identifying the remains of a murder victim or the madness that accompanies the complete destruction of the world in which his characters live.

Tokyo Year Zero might be, in the hands of a lesser writer, a pretty good crime book. On the day of Japan’s surrender (a situation unthinkable to most of its citizens, yet one that circumstance force them to wrap their minds around), the rapidly decomposing body of a murdered woman is found floating in the rancid water-filled basement of a bombed-out war factory. Faced with conducting an investigation while in shock, the detectives — including Minami — watch as an enraged Kempetai officer (the Japanese version of the Nazi SS) executes a Korean slave laborer found in the area, then declares the case closed. Simple enough. After all, it’s not as if one more outrage matters much in the face of all the outrages of World War II.

But a year later, as outrage upon outrage piles up for Minami, the bodies of two more murdered women are discovered in a park. His investigation is hampered both by the premature closing of the first case and by the presence among his superiors of an officer who has plenty of reason to keep the original murder from being linked to the bodies before them.

Minami reminds us, with one of several mental refrains, “No one is who they say they are.” The first mystery of the novel is the identity of the killer, but it is the novel’s second mystery that forms the narrative arc: Not “Who did it?” but rather “Who is it?” Finding the names of the dead women and making sure that they are all accounted for obsesses Minami, but he also is continually haunted by questions of identity and responsibility as he navigates the bombed-out, corrupt landscape of post-war Tokyo while struggling to hold on to his cobbled-together sanity.

He is also conducting an “unofficial” investigation into the murder of an organized crime chief, as well as questioning who is really in charge of the investigation into the women’s murders and what everyone might or might not be hiding — including who they really are. Plagued by plots and counter-plots (some of which actually exist), more than anything else he begins to suspect himself.

Peace adopts a break-neck pace, moving throughout the city and into the countryside. One day bleeds seamlessly into the next as the repetition of Minami’s thoughts and the passage of time by seconds (“chiku-taku,” the sound a clock makes ticking away) propels the reader along with him down a road that can only lead to destruction — because, quite simply, rubble is all that’s left of Minami’s Tokyo. The new city that rises in its place will never be what Minami seeks.

Tokyo Year Zero is a creditable murder mystery/police procedural, but the real power of the novel is in all the other tales of disintegration Peace threads throughout the detective story to form an indictment of both the defeated and the occupiers. This, then, is a city that doesn’t need crime to destroy it; war is enough.

Kel Munger is a staff writer for the Sacramento News & Review