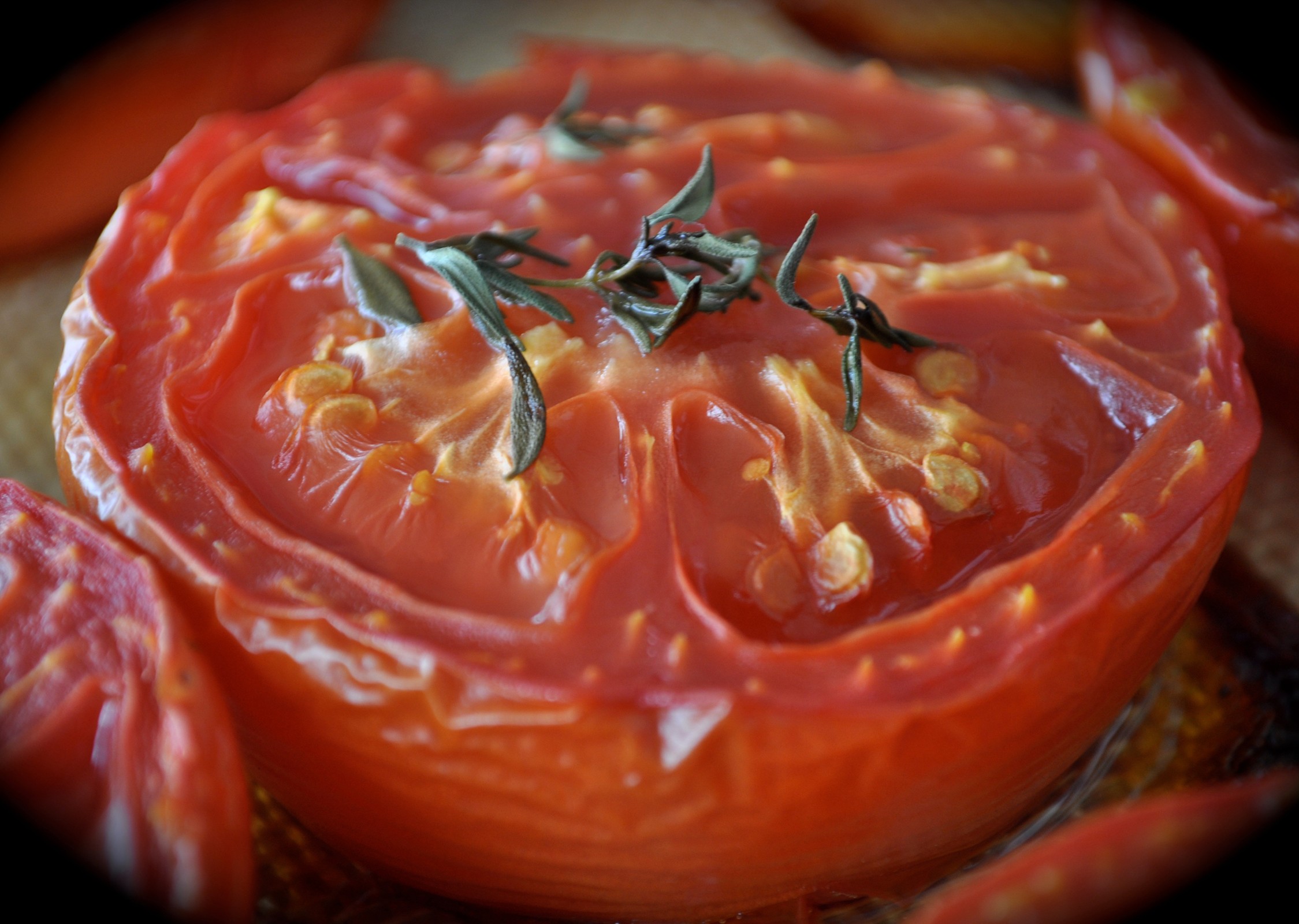 Being Italian, I should be eager to preserve tomatoes. My mother did it every summer in her kitchen. If my memory serves me well, she would get 175 pounds of San Marzano tomatoes and turn them into countless bottles and jars. As long as I lived with my parents, I played a role in my mother's preservation enterprises. I cannot say that I was enthusiastic to provide help. Pitting cherries or peeling peaches was all right, since diverting some of the fruit from long-term preservation to immediate consumption offered compensation for the rather tedious work. With tomatoes, there was no such respite: I love tomatoes, but the kind I was in charge of processing were not really good to pop in my mouth.

In my earliest memories, I processed tomatoes using a food mill. Later, my mother bought an electric tomato strainer, but I still used the food mill to process the discards from the tomato strainer -- the skins still had some pulp attached. Only dry skins and seeds were eventually discarded. My mother was in charge of preparing the glass jars of halved tomatoes. She had the whole process down like clockwork.

More recently while my rational side thought that I should once again be preserving tomatoes, my emotional side resisted working out a plan. The situation started to change last year, when I got into roasting tomatoes. First, it was cherry tomatoes, which I used in several recipes (see Table Talk, Sept. 9, 2010, "Actual Tomatoes, Size Small"). I then moved on to slow-roasting larger tomatoes starting with Romas. Slow-roasting is an excellent way of treating those tomatoes. In fact, they were so good that I ate most of them off the baking sheet -- not exactly the right thing to do given the stated goal of preserving them.

Roasting ripe, tasty slicing tomatoes (procured from our CSA box and from the Farmers' Market) came next. To my surprise, I had fun processing the roasted tomatoes with my food mill, probably because I did not have countless pounds to deal with. I could decide ahead of time how much time I wanted to invest in the task and proceed accordingly. I used the strained roasted tomatoes in various ways, then made more and froze them. I'm following the same process this year -- I call this tomato preservation for the cautious. In the end, my background asserts itself: I am Italian, hence I preserve tomatoes ... in my own way.

I have prepared some nice sauce for pasta all'uovo (egg pasta) with the roasted strained tomatoes. Another dish that I like to do with them is my idea of tomato-based comfort food: uovo col pomodoro. I'm not sure how this recipe became a family tradition. My mother used to make it for the four of us, but more often for one or two, by special request. Those bottles of tomatoes I'd helped process came in handy when such a request was made.

Last year, in David Gentilcore's book, Pomodoro! A History of the Tomato in Italy, I found a recipe for Uova al piatto con pomidoro (Eggs and Tomatoes) from Elizabeth David's Italian Food. When I read the name, I thought that I had come across a record of the dish from my childhood. Elizabeth David's recipe is different, most importantly in the fact that in her version the eggs are left whole instead of beaten. I learned that other people knew the version with whole eggs, and also that there is a Greek dish called Kagianas or Strapatsada like in my family recipe, in which the eggs are lightly beaten before being added to the tomato sauce.

The quantities given in the recipe on this page are those I use when I prepare it for the two of us, usually as just part of our dinner. When using more than one egg, the recipe should be more appropriately called uova col pomodoro (uova is the plural of uovo). However, at home we always called it uovo col pomodoro, even when my mother prepared more than one portion.

Cut tomatoes in half crosswise and place them, cut side up, on a baking sheet lined with a silicone mat or parchment.

Drizzle tomatoes with a bit of olive oil and sprinkle with thyme leaves.

Once cooled, spoon tomatoes into a food mill fitted with a medium disk and process.

Process until only dry skins and seeds are left behind.

Alternatively, put tomatoes in a food processor fitted with a steel blade, process briefly, then push through a mesh strainer.

Refrigerate and use within a few days, or freeze.

In a saucepan, warm up the olive oil over low heat, then add the garlic cloves.

Let the oil absorb the garlic flavor for a minute or so, making sure the cloves do not turn brown. Add the tomatoes and stir.

Cover the saucepan and simmer for 10 minutes.

In a small bowl, lightly beat the eggs with a pinch of salt until just blended.

Pour the eggs into the tomato base and turn up the heat to medium-low.

Stir with a wooden spoon.

Let the eggs and tomato mixture cook, uncovered, for about 5 minutes, stirring often and turning down the heat when it starts bubbling again.

Retrieve the garlic cloves and discard them.

Adjust the salt and serve immediately, accompanied with a slice of rustic bread, which can be used to scoop up the creamy uovo col pomodoro.