Listen, it has been a year. You'd think the dick moves on the national stage would overshadow us but not so. Looking back on 2018, we saw a bevy of folks making classic dick moves — selfishly and flagrantly doing wrong because, well, they could — running the gamut from racism to bad manners with a strong showing in screwing over Humboldt's flora and fauna. Peruse this year's cavalcade of bullshit and let us know if we've missed somebody.

10. If this list of bad behavior teaches you nothing else, remember to call your mom. The Bachelor contestant Bekah Martinez landed herself on the California Department of Justice's list of missing persons (and our cover story "The Humboldt 35," Feb. 1) when her mother, who'd last heard Martinez was in Humboldt, couldn't reach her for five days. You might recall a Journal reader spotted and ID'd her photo. Take a social media cleanse, screen your calls. But don't scare your mother or waste police time. It's a dick move.

9. Stealing a goat is for football teams and practicioners of black magic. We doubt either climbed up and stole the iconic fellow who overlooked the entrance to Richards' Goat Tavern and Tea Room. Goat statues don't have a lot of street value and wrenching the thing off a roof is going a bit far in revenge for getting too much vermouth in your Martini. So our best theory as to motive is sheer dickery. (But if it turns out to be witches, we're cool, right? We're not trying to get hexed over here.)

8. Is the KINS Telephone Opinion Poll trolling us? On April 3, the question of the day read, "Recently, Newsweek published results of a poll stating roughly 20 percent of Americans viewed interracial marriages as 'morally wrong.' Do you support interracial marriages?" Listeners who picked up actual phones to respond saw that miserable, ass-backward 20 percent and said, "Hold my beer." In an ensemble dick move, 34 percent of KINS poll respondents came out against interracial marriage to beat the national number. Sidenote: You are terrible people.

7. Ugh. Two weeks after the Arcata City Council voted to remove the statue of President McKinley on the plaza, Councilmember Susan Ornelas (who'd voted for removal) suggested the fate of the figure go to a citywide vote. Then, after another fortnight of heated debate and hours of public comment we'll never get back, she dropped the whole thing, preferring to "just forget this" and move forward with the original decision. You're killing us, Susan.

6. Speaking of anonymous misdeeds, an as yet unidentified NCJ employee has been leaving a shotglass worth of coffee in the pot to simmer and burn down to a black film of brimstone instead of brewing a new one or — gasp — washing the pot. Not cool, man. Or woman. Caffeine is vital news fuel and we will not see it so disrespected. End this madness before you are caught, for our justice will be swift and petty.

5. A trio of succulent thieves plucked plants from public lands to sell in Asia, only to be busted and sentenced in June. The Instagram trendiness of succulents just makes this eco-criminal venture that much dickier. Word to the wise: Buy your native plants like everybody else.

4. The Humboldt State University football players and fans weren't the only ones who got dumped to cut costs this year. In April, HSU announced it would shutter its Third Street Gallery, an anchor of the local art scene and a popular stop on Arts Alive! nights since 1998 that also served as hands-on training for the university's gallery practice certification. Community members wrote letters of support to no avail and, despite the gallery's lease running until 2021, there'll be no more shows in the space. Just empty walls and the echoes of an administrative dick move.

3. A walk through our majestic redwoods inspired some trash burl thieves to take chainsaws to the base of ancient trees and hack away the valuable wood to make a buck, leaving the tree to suffer potential disease and infection, while interrupting the delicate process of reproduction. It's not a crime unique to this year, sadly, but it bears saying: All of nature and future generations of humans look upon the thieves in judgement for this dick move. We hope their reproductive processes are likewise thwarted.

2. Dick moves were afoot in Blue Lake earlier this month, where California Department of Fish and Wildlife officers discovered elk poachers had shot four female Roosevelt elk outside of permitted hunting season, including a pregnant one. Off the charts dickish. You know what's not a dick move? Calling (888) 334-2258 if you know anything about the crime. It'll clear your conscience (hey, we've all got dick moves in our ledgers). And I'll buy you a cookie. 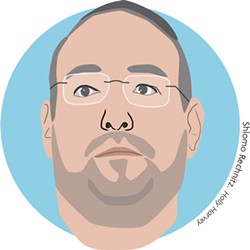 1. Just when you thought he'd slunk off our list, Shlomo Rechnitz, the billionaire owner of Brius Healthcare and the four Humboldt skilled nursing facilities that have been chronically understaffed and cited for violations over the years, is back. This time his facilities, which have settled a pair of wrongful death lawsuits out of court, are asking to be exempted from a new state requirement that they provide a minimum of 3.5 hours per day of caregiver staffing for each patient in their care. But hey, it's just the health and safety of our elders at stake, so why pony up for the absolute legal minimum? Congratulations on this year's champion dick move, Shlomo.