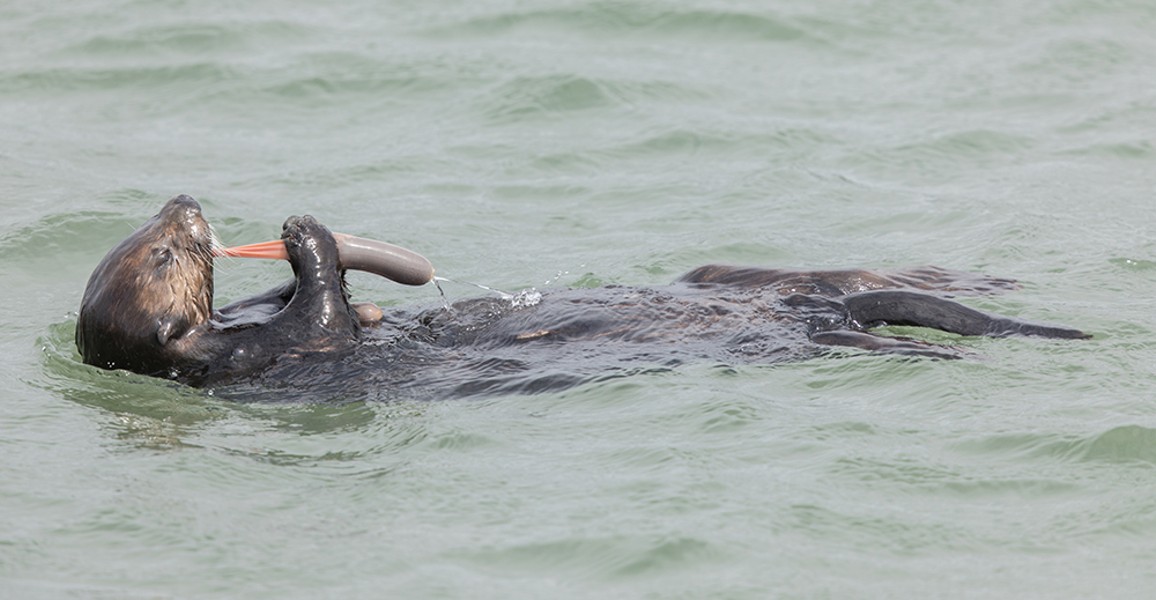 Shutterstock Potential mascot for 2020. At least someone is making the best of all these penis fish.

In the final weeks of the decade, instead of a plague of locusts, a beach full of floppy, pink innkeeper worms, aka "penis fish," washed ashore at Bodega Bay. We get it, universe/God/all-powerful being/Baby Yoda: so many dicks. Here in Humboldt, we had our own tide of dick moves, with local actors making more than enough unnecessarily selfish, petty and eye roll-inducing choices to cover our shores. Here are the ones that irked us most.

10 The Eureka Street Art Festival brought more color to the city in July and August, including a mellow Bigfoot by Dave Van Patten. Then some tool with a can of spray paint wrote, "Go back to LA" and "real street art" over it in a middling composition. Dicky stuff. This is likely the most attention your work will ever get and that's all you have to say? Also, if you have to tell everybody you're the real thing, hon, you aren't.

9 Humboldt's wilds can be unforgiving. Even less charitable at times are its online comments. Responding to missing hikers, drownings and near drownings by ranting about how dumb the victims are in your estimation is a heartless dick move. Nature is always trying to kill us and knowing slightly more about evading its dangers doesn't make you better than anybody else. Maybe it makes you feel a little more in control in a chaotic world. But as Olympia Dukakis says in Moonstruck, "No matter what you do, you're gonna die just like everybody else."

8 In his Here's a Thought column in the Times-Standard, Tim Martin dispensed mothball-scented cultural observations and scolding opinions filled with folksy anecdotes. He shared gems of Everyman wisdom like why gay pride parades should tone it down and how Mister Rogers raised a generation of wimps. The latter just missed deadline for last year's Dick Moves. But in March, a reader alerted the paper that his personal stories about neighbors and uncles were lifted and lightly tweaked from Reddit threads. Editor Marc Valles rightly dropped Martin with a thud, announcing in a column, "We're done here." Plagiarism, boys and girls, is a dick move.

7 At first, it seemed like an accident. But when I put my aromatherapy neck warmer in the microwave for 11 and a half minutes instead of one and a half — setting the terrycloth aflame and reducing it to a smoldering, black lump — did some part of me want to fill the Journal's office with the eye-reddening smell of burnt rice? Was I purposely flavoring everyone's warmed burritos with my acrid pain, the same brimstone rage at the state of the world that had caused my neck to seize up like an overcooked steak? Yeah, sounds like me. And like a real dick move.

6 Making a dick move over a pole is a little on the nose but Fortuna City Councilmember Dean Glaser isn't subtle. Unless you count his ability to discern radical leftist messaging from an art pole that reads, "Believe there is good in the world." Glaser railed against the public art project proposal at a March meeting, proclaiming, "I don't need to be driving down Main Street and seeing it in front of the Monday Club. It's going to tick me off. I don't like this kind of political statement." He also compared it to building a mosque at the World Trade Center site, in case anyone was wondering about his Islamophobia. Just — dick move, man.

5 In April, Allen McCloskey responded to a barn burner of a story by Lost Coast Outpost's Ryan Burns (including allegations of fraud and perjury McCloskey blamed on a look-alike ex/con-man) by withdrawing from the supervisor's race and lobbing an accusation of fake news. Dick move, my dude. McCloskey followed up with a press release alleging a fellow Democratic committee member had harassed him by sending explicit photos — legit complaint — which McCloskey copied and pasted into the statement WITH NO WARNING. Not as an attachment — right there with the text so that everyone scrolling through was also subjected to unsolicited amateur porn. Passing it on like the cursed video in The Ring. Literal dick move.

4 The October PG&E planned power outages brought out the best in some and the dickishness in others. Local police reported generator thefts here and there, which is terrible, but the thief/thieves who took the one from Myrtle Avenue Veterinary Hospital take the dick-shaped cake by putting animals' lives at risk. We do not deserve the unconditional love of dogs or even the tolerance of cats.

3 Supervisor Rex Bohn completed the time-honored cycle of racist joke, non-apology and actual apology in April after asking if a Mexican dinner was "so authentic that we're going to want to steal hubcaps after we eat." Not great! While it was good to finally hear him tell NCJ, "I made a comment that offended people. I said it and I'm sorry," his initial response that he didn't recall it was also pretty dicky. As were the dismissive comments of his fan base. You don't get to tell people of color when they have a right to be offended by racist comments or feel concern about the hostility said comments inspire and normalize. Acting like you do is a dick move.

2 KINS is becoming a regular on the list, this time with the dick move of bringing famed sexual harasser Bill O'Reilly to our local airwaves by signing up for his syndicated show. With a long resume of credible accusations of harassment and assault, and settlements in the tens of millions of dollars, even Fox News finally closed its checkbook to the man who famously was recorded telling a coworker he wanted to do gross stuff to her with a "falafel." He meant "loofah" but is that any better? Either way, now you can tune in and listen to him lecture you about values.

1 And finally, the grossest, fleshiest penis fish on the beach: It would have cost St. Joseph Hospital a grand total of nothing to properly address Oliver Knight, a transgender man, and give him the appropriately coded blue surgical gown ahead of his hysterectomy. But, according to the lawsuit filed by the ACLU in March, the hospital instead chose to walk the path of dickery, ignoring Knight's medical records — which listed him as male — and refusing the correct gown, canceling the surgery and showing him the door. Congratulations on your win doing unto others like a real dick. Do better.