Dell’Arte Creates A Classic with Blue Lake: The Opera 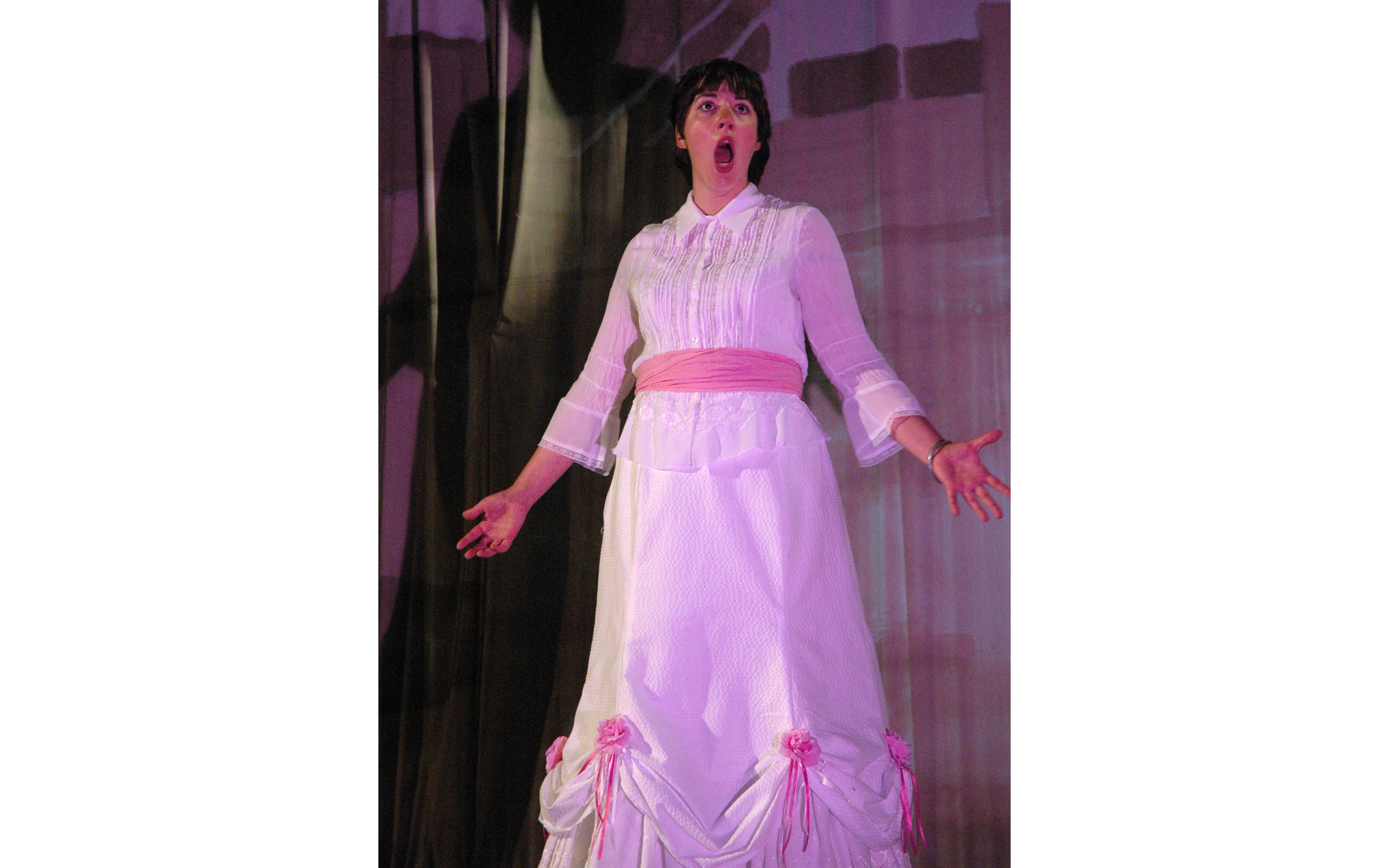 It's 1910, early days in Blue Lake. Big civic problems are hogs in the street and the lack of a fire hose. But there's a train station, and a lake (kind of).

Enter the woodsmen, suspicious of townies, singing manfully as they bisect a redwood. The town is run by the Odd Fellows lodge and its visionary leader Augustus "Big Gus" Lamont, whose ambition is to outdo "those hicks in Korbel." The national lodge's Sovereign Grand Secretary comes from Baltimore to see if the town is worthy of financial help. He falls for Lamont's daughter -- a marriage that promises prosperity, but she's in love with the handsome town orphan.

And so the opera has begun, and by its conclusion there will have been gunfights, suicidal despair and a fire as well as hysterics, rescues, revelations and several new couples expressing frontier morality and (in 21st century Dell'Arte style) multiple sexual preferences.

When I first heard that Dell'Arte's summer production, Blue Lake: The Opera was actually going to be an opera, one possibility I imagined was a send-up of grand opera excesses, complete with some Blue Lake equivalent of Brunhilde, perhaps with deer antlers instead of Viking horns on her helmet, bellowing out the final aria. But this is something else: a remarkably straightforward comic opera, which finds its wit and humanity in articulating the simplified and heightened comic reality it portrays. Forget Wagner or Verdi; think Gilbert and Sullivan.

It's funny and fun, as befits the Dell'Arte summer outdoor show, but it is something more. Blue Lake: The Opera is outstanding and memorable, part of Dell'Arte's festival tradition but transcending it.

This particular production has a cast without a weakness, from the youngest child and the impressive debut of Maya Fields to the adult performers, including Dell'Arte regulars (Michael "Maya's Dad" Fields, Tyler Olsen, etc.), locally known players (Jacqueline Dandeneau, Jerry Lee Wallace, etc.) and less familiar performers -- especially James Peck, who infuses the visiting Grand Secretary Leonard Bulge with essence of Simon Legree, and yet a touch of sympathetic vulnerability. He also sings the most tongue-twisting Gilbert and Sullivan-style song with skill and relish.

But the opera absolutely soars in the voices of two trained and excellent opera singers: Emily Windler and David Powell. Windler is a revelation, but Powell is a promise fulfilled -- at last he has a part that showcases his voice in several expansive songs. Credit also the music of Tim Gray and his excellent band, as well as sound designer Gregory Lojko.

As directed by Michael Fields, the action flowed seamlessly. The summer festival component was clearest near the end, when Fields as "Big Gus" has one of his visions, of the new Odd Fellows Hall someday housing a theatre company. The opening night audience not only laughed but applauded -- they knew that the rebuilt hall was in reality the Dell'Arte theatre building, and the amphitheatre Big Gus was dreaming is the one he was addressing, where they sat or sprawled in the June night of one hundred years later. It was a magical community moment, exemplifying the Dell'Arte ideal, theatre of place.

Design, costumes and effects are equally top-notch, but in my view the principal reason that Blue Lake: The Opera transcends its occasion is the writing of Lauren Wilson, which includes the script (much of which is sung) and most notably the brilliant lyrics to the formal songs.

Also credited as the opera's co-director, Lauren Wilson wrote Dell'Arte's Golden State, and teaches acting and dramatic writing at the Dell'Arte International School. In a pre-production interview, she said her challenge for the opera was "to not have the magic and real power of theatre be destroyed by too much text," especially in view of Dell'Arte's practice of ensemble-created works.

Fair enough, but there are also benefits to starting with a script. My first forays into theatre were as playwright, so I admit my prejudice. But it seems to me that Wilson's script provides a structure and a flow, plus words worth saying and singing, that enable participants in all elements of the production to do their best with confidence. Perhaps strengthened and expressed with new invention in rehearsal, a playwright's vision in a fruitful script provides direction to improvisations and production, while also inspiring and liberating them. It also tends to make the resulting play more universal. For me, Blue Lake: The Opera proves that possibility.

In any case, this is a play worthy of attention here and now, and beyond. Blue Lake: The Opera concludes this weekend, July 1 through 3.

Coming up elsewhere: A one-weekend North Coast Rep production of David Mamet's drama Oleanna with Alexandra Gellner and Gary Sommers, directed by Linnea Conway, on July 2 and 3 at 8 p.m. Redbud Theatre presents The Money Ball, a homegrown topical comedy by Brian Bottemiller, directed by Bruce Marrs. The play, set on a fictional golf course, is presented at Willow Creek Golf and Country Club at 8:30 p.m. on Saturdays and Sundays of three consecutive weekends beginning July 2.