It's official: Eureka supercenter could be open by May 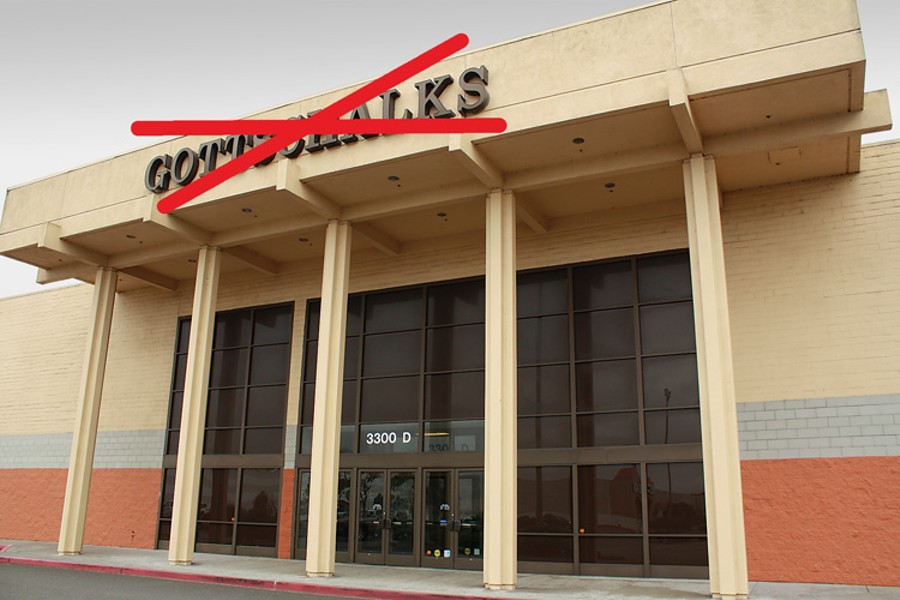 Photo by Zach St. George; Illustration by holly Harvey Before ...

Illustration by Holly harvey ... and after?

The open secret of the new tenant at Bayshore Mall became more open and less secret last week as construction workers talked about the remodeling.

"I don't understand the secrecy. I've never seen it before," said Jay Wright, an inspector for Fresno-based Moore Twining Co. "When I checked into the motel, I told the lady I was here to work on the project at the mall. She said, ‘Oh, you mean the Wal-Mart store?' Everybody seems to know!"

Last week heavy equipment pounded away, busting up the concrete floor inside the building to make way for modern plumbing. Dust filled the air as excavators with giant pinchers scraped twisted metal into piles. The fanciful circular mezzanine, a Gottschalks trademark, is already history and so is much of the two-story section to the west that housed offices. On the roof, where the misty fog was lifting, workers were testing for hot electrical wiring -- before ripping it out along with the old heating-and-cooling units -- while gas lines, repeatedly thumped by bulldozers below, shook like thunder.

By the end of the month, the building will be a shell -- gutted -- and reconstruction begins. By April the project is expected to be complete, and the store ready to turn over to the tenant for shelves and stocking, and a grand opening in May.

Wright has worked on about 30 Wal-Mart projects over the years for Moore Twining and other engineering-consulting firms. He joined a discussion I was having one afternoon last week with Chuck Bowers, field supervisor for the construction company Bateman-Hall of Idaho Falls. Bowers, who offered to give me a tour of the project, is in charge of the remodel and Wright will do independent structural inspection as the work progresses.

"So your company [Moore Twining] has a contract with Bateman-Hall or directly with Wal-Mart?" I asked Wright, who had just arrived in Eureka last week.

Wright just indirectly confirmed what I had already learned from Bowers, who is heading up his eighth Wal-Mart project for Bateman-Hall: that neither company is working for the owner of the property, Carrington Co. Both are under direct contract with the tenant, Wal-Mart.

When I asked Bowers about all the secrecy, he said he, too, had not encountered it before, but he thought Wal-Mart's name was on the plans like they usually were. He said he had a set in his mobile office on site so we went to look. It was then he discovered he was mistaken. The big block letters on the elevation sheet clearly said, "TENANT." After that, Bowers dropped the use of the W-word for the rest of the interview.

What a difference 12 years makes. In 1999, Wal-Mart came to Eureka proposing to pave much of the 38-acre Balloon Track parcel -- then owned by Union Pacific. Never mind that the property was not zoned correctly, the local coastal plan and county General Plan would have had to be amended, and the project would have had to be approved by the California Coastal Commission. Never mind that the undeveloped property has a magnificent, sweeping view of the bay entrance, boat traffic and harbor adjacent to Old Town Eureka, the Victorian seaport.

Founded in 1962 by Sam Walton in tiny Rogers, Ark., Wal-Mart today is the largest retailer in the world (Fortune 500 ranked by revenue). It is also one the largest employers in the U.S. with 1.4 million "associates." What Wal-Mart wants, it usually gets.

So in 1999 Wal-Mart hired signature gatherers in Eureka to put "Measure J" on the ballot. It would have forced the City Council to rezone the Balloon Track. (Wal-Mart reimbursed the city for special election costs.) But even though Wal-Mart outspent its opponents 8-1, it was not enough. In a huge turnout of more than 50 percent of voters, 61 percent resoundingly said no. To Wal-Mart, the largest grocery-apparel-pharmacy retailer in the world.

What Wal-Mart was denied in 1999 -- a foothold in Humboldt County, where land for big box retailers is surprisingly scarce -- becomes a reality in the spring of 2012. Wal-Mart has leased the old Gottschalks building in the rear of the Bayshore Mall from Eureka-based Carrington Co., which purchased the building and seven acres in 2010 bankruptcy proceedings. There will be no costly ballot initiative this time around, no public debate, no re-zoning, no general plans changes, and no Coastal Commission scrutiny. That's because the two projects -- 1999 versus 2012 -- are very different.

By the end of last week, and after many more questions, even a Eureka city employee used the W-word.

"We have had no direct communication with Wal-Mart. None. We always deal directly with the architect and the property owner," said Brian Gerving, code enforcement coordinator assigned to the project.

Gerving was happy to point out the differences between Wal-Mart's 1999 plans and the current project, however.

"They are totally different. The main difference is they have a right [to open a retail store in the mall]. The development standards have already been met. The other project [1999] would have required a local coast plan amendment, a general plan amendment, rezoning."

The other huge difference between the two projects is sheer size: The former Gottschalks building is 70,000 square feet. That's a small size for a full-service Wal-Mart Supercenter, which can range up to 180,000 square feet with acres of parking to match. And because the Bayshore Mall, built in 1987, is in the coastal zone, any expansion is unlikely unless more existing space could be found in the mall.

Pattison Christensen, asset manager for the Carrington Co., said the new tenant is good for the North Coast economy.

"There are some stats our tenant has that clearly show Humboldt County has shoppers that travel north, south and east to shop at their stores already. And there's the Internet, people shopping online. Those will be new tax dollars [for Eureka]. And there will be some new employment."

Christensen said local businesses are getting construction work, too.

"Bateman-Hall does a great job of ‘blending' locals with out-of-towners," he said. He said "six or seven" subcontractors already have been hired including Maples Plumbing, O & M Industries and New Life Services Co.

Both construction out-of-towners -- Wright and Bowers -- said they are baffled that there would be any controversy about Wal-Mart coming to Humboldt County.

"There's always going to be people who bad-mouth Wal-Mart," Bowers said. "They may be people who own other businesses and don't want competition. [But] every community I've worked in was happy to get Wal-Mart. ... Pullman, Wash., Longview, Wash. -- They were tickled pink."

Bowers, who has built and remodeled commercial space and big box stores throughout the West and Midwest for almost 40 years, said his assessment of Eureka is, "You can use some competition. Safeway, Ray's ... have high profit margins. ... The only store around that is competitive to Wal-Mart [for groceries] is Winco."

And since Wal-Mart accounts for 33 percent of the grocery business in the United States, that's a lot of cheap lettuce.

"It will be very positive, one more big tenant to bring people to the mall. Whenever we lose an anchor, we feel it," she said. "Someone of this size has a regional draw. We have people from as far away as Laytonville shop the mall."

The only improvement planned by the mall management is repaving a strip of asphalt at the far north mall access, the one that will bring traffic directly to the Wal-Mart's front door. It's a one-lane, one-way entrance off Broadway by Applebee's Restaurant. To exit, customers must travel south to one of the two intersections regulated by stoplights.

When asked if the sweep of homeless camps behind the mall last week was related to sprucing things up for the new tenant, Swanson said no -- and yes. She did have a meeting with Eureka Police Chief Murl Harpham a few days prior to the police arrival. But that isn't unusual, she said.

"We work with the city all the time. When we know we have an increase [in homeless population], we let them know."

And when officers have extra time, she added, they also stake out that pesky mall entrance on the north end. You can and will get a ticket if you try to sneak out. And that also will mean some additional new revenue for the city.

Editor's note: On Tuesday, prior to press deadline, a Wal-Mart spokesperson confirmed via email that the corporation is renovating and remodeling the vacant, former Gottschalks store. “We are excited to redevelop this store, offering an affordable shopping option and being closer to our Eureka customers,” said Deborah Herron, Wal-Mart senior manager for public affairs and government relations.

Although the Journal submitted phone and email questions regarding the secrecy surrounding Wal-Mart’s first store in Humboldt County (“How unusual is it for Wal-Mart to require confidentiality agreements from the property owner and construction contractors, and why was this the case in Eureka?”) Herron said she was still researching the question and did not respond by deadline. We will post her response online when it is received.