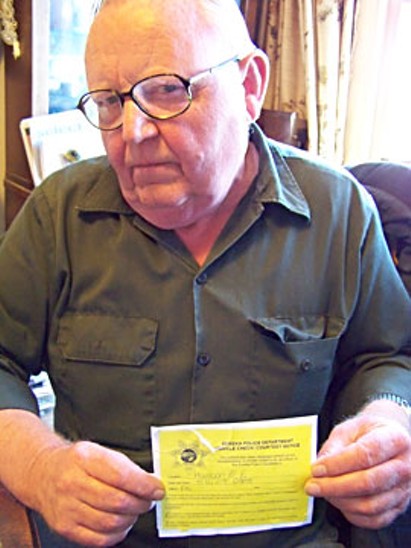 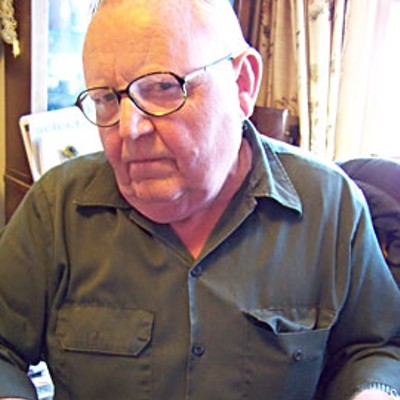 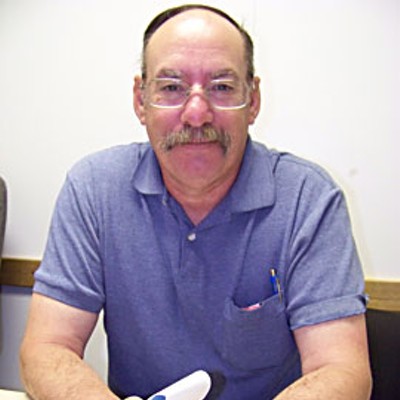 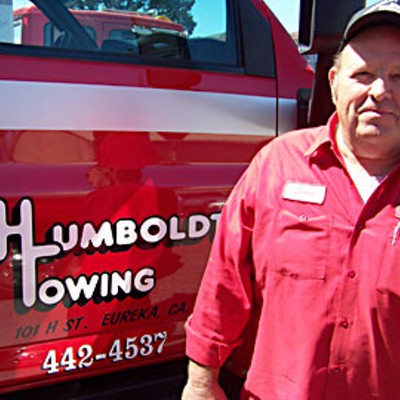 One Friday morning in mid-May, Bill Hartin was sitting inside his house in central Eureka when he saw a woman get out of a little white car with a City of Eureka logo and walk over to the polished blue ’85 T-bird he and his wife, Arlene, own.

“It was 9:58 in the morning,” says Bill Hartin. He and Arlene are at home this mid-June afternoon, retelling the story. A bright yellow rectangle of paper is on the table between them; it’s a notification that says if they don’t move their car within 72 hours, they’ll get fined $30, and if it’s still not moved within 10 days after that, it’ll be towed.

“I looked out the window, and she’s over there writing this so-called courtesy notice,” says Bill, his Irish accent expanding with the outrage. “And I waited to see if she was going to come knock on the door, but she didn’t. So I went out there — and I feel kind of bad about this now — and I told her I didn’t think much about that law, and she said she was sorry.”

“That law” is part of Eureka’s vehicle code — and state law — and it says if a car has been parked in the same spot on the street for 72 hours without being moved it can be towed. It doesn’t matter whether or not the car is registered, insured, wanted or operable.

If the car is obviously not in working order — say, up on blocks or with smashed windows, junk piled to the ceiling light and rats running around in it — it’s considered a health and safety hazard and can be towed without notice, says Lt. Murl Harpham, a former Eureka Police Department captain and current public information officer. If it looks operable, it gets the courtesy notice.

While it’s an old law, Harpham says the EPD’s new chief, Garr Nielsen, has ramped up enforcement of it in response to complaints from residents.

“We have several citizens who regularly call us,” Harpham says. “One of them calls himself ‘the real mayor of Eureka’ — Jerry Droz. He turns in a lot of vehicles. He was out of town for a while, so it went way down.”

In the past, the department might mainly respond to specific complaints. But now five of the EPD’s nine PSOs — public services officers — cruise around specifically looking for abandoned or overly-long parked vehicles (amid other duties).

Ken McCauley, a semi-retired EPD officer who runs the abandoned vehicle program, says the department wrote 2,064 courtesy notices in 2007, and ended up towing 440 vehicles. So far in 2008, the department’s written 1,225 courtesy notices and towed 115 vehicles. McCauley can’t provide figures from past years, because the book containing the stats on notices and tows from 1986 to 2006 has been missing since the January remodel of the EPD’s headquarters.

Hartin likes the new chief, but he hates the law that caught his T-bird — which, he allows, had sat on the street a long time while he tried to sort out a mechanical problem. (He recently fixed it, and Arlene’s been driving it some to keep it legal.) He and Arlenesayat least four of their friends have also received the courtesy notices on perfectly fine vehicles.

Another resident, Lloyd Reece, says his truck had been towed under the same law — twice. Reece says in the old days, the EPD would give you a number of citations before towing your car. You’d have some time. Now, he says, “they’re just running around and ticketing you.”

The last time his truck was towed, it was a Friday and it stayed the weekend at the tow yard. Reece says it took him a while to find out what happened to it because the EPD didn’t have a record of its being towed.

“So, basically, you don’t know if your car has been stolen, or what,” he says.

McCauley says once a car has been towed, the EPD mails a certified letter to the owner. There is no phone call or other contact, and once it’s towed it’s in the tow company’s hands.

A neighbor who happened to see Reece’s truck towed told him to check Humboldt Towing, and that’s where he found it. He says Humboldt Towing’s owner, Leroy Hoffman, felt sorry for him and waived half of the roughly $300 in storage fees. Reece had to pay the tow fee, however. He says Hoffman told him he’d been towing a lot of registered, non-abandoned cars lately, and that he “hated it.” Humboldt Towing is one of several tow companies the EPD uses.

“Maybe you don’t drive it a lot, maybe you’re an elderly person,” says Reece. “My mother, she just keeps her car in front of her house until she wants to go somewhere and then she calls somebody. That’s what people do. Especially with gas prices today, people are taking their bicycles and carpooling and cars are sitting more and more and more.”

What’s crazy, he says, is there is a truly abandoned vehicle in front of his house that’s never been towed. “I think they don’t want to tow abandoned vehicles, because there’s no money in it,” Reece contends. Either that, or maybe they’re targeting certain people.

Harpham says no one’s being targeted.

“It’s like going duck hunting,” Harpham says. “You know, a flock flies over and you can’t get ’em all, and the ones you get are just the unlucky ones, I guess.”

When a car is towed, the EPD pays the towing bill — about $50 — if the car goes unclaimed. The EPD gets reimbursed for such tow fees, as well as for postage to send the certified letters and for McCauley’s salary, through the state Abandoned Vehicle Abatement program, which is funded by a $1 fee on all Department of Motor Vehicle registrations.

McCauley says the reimbursement, calculated with a formula using population, geographical area, number of tows and other factors, often doesn’t cover all of the expenses and the department has to draw from the general fund.

If a car owner claims his car, he pays the towing and storage fees.

Hoffman, at Humboldt Towing, says only one out of every 10 cars they tow under the abatement program gets claimed by its owner. The rest get junked — and often that means a trip to the dump, first, to empty out loads of crap, and then to John’s Wreckers. The EPD reimburses the tow company for those costs.

“We have towed more cars recently than in the past,” says Hoffman. “The majority of those vehicles should be removed from the street. Unfortunately, there have been a few people who have vehicles that probably shouldn’t have been towed. However, it’s legal.”

Reece says he told City Councilmember Larry Glass there should be a sticker that a homeowner can place on his car that allows him to park it in front of his house as long as he needs to.

Glass says he’s been trying to interest the city manager and the police chief in just such a program.

“I’ve been proposing it for six months now,” Glass says. “I’m basically waiting for the city manager to give the go-ahead. I fully support the abatement of vehicle warehousing on the street, but any rule you make you have to build in some exceptions.”

For now, the EPD’s McCauley says he keeps a list of people, including senior citizens, who’ve called to say they have no other place to park their car and they won’t be able to move it for a while.

“A fellow might call us to say he’s remodeling a house, and he’s got his trailer parked outside, and we’ve courtesy noticed it,” McCauley says. “And he’ll say it’ll need to be there another two weeks. So we’ll make an exception for that. We’re not going to stop him from making a living.”

Hartin thinks the law should be changed. He does have a place off-street to park the old T-bird, in fact — a garage. He just doesn’t think he should have to, especially because that might tell burglars they’re not home.

“I’ve lived in Eureka 51 years and we’ve been in this house 20 years,” Hartin says. “I’m really angry. What harm was my car doing there? It was legally licensed and insured, and it was in front of my own property. What was the problem?”