Toward a Sustainable Blue Economy

Symposium focuses on harnessing the promise of the coast 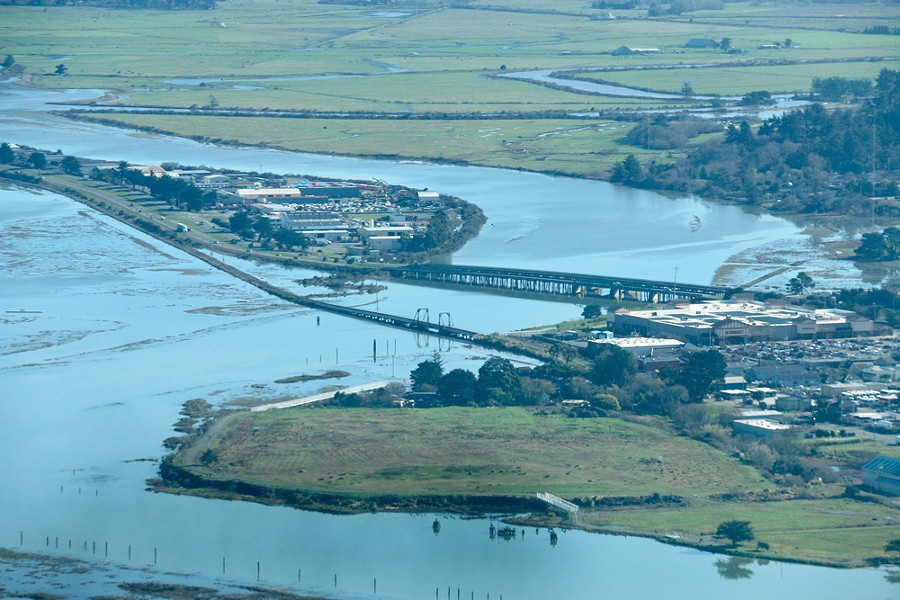 File The Eureka Slough during a 2019 king tide event gives a glimpse of what sea-level rise will look like around Humboldt Bay.

The perennial conflict between environmental conservation and economic development may now be in remission, the crisis of climate change increasingly pushing industries into cooperation with environmental goals. One such path of co-existence, at least along the California coast, is the "Sustainable Blue Economy," defined by the World Bank as the "the sustainable use of ocean resources for economic growth, improved livelihoods and jobs while preserving the health of ocean ecosystems."

A three-day symposium on the "Sustainable Blue Economy" was held virtually last week, sponsored by California Sea Grant, the Humboldt Bay Initiative and several local consulting firms. The symposium featured scientists, community activists and an economist, as well as government officials of all denominations, ranging from county planners to the head of a state agency.

The keynote speaker was Wade Crowfoot, secretary of California's Natural Resources Agency, an umbrella agency that supervises the Department of Fish and Wildlife, the Ocean Protection Council, the Coastal Commission, the Coastal Conservancy and numerous other environmental agencies.

People identify climate action with electric vehicles or solar panels on roofs, Crowfoot said, but we also need to elevate the role of nature in helping us combat the climate crisis.

"Humboldt Bay is one of the most beautiful places in the world," Crowfoot said. "However, it faces different challenges than any other area in the state. Coastal communities face a daunting set of threats, and need resources ... so that these communities can continue to thrive decades into the future, even as climate effects intensify."

"We have the leadership, we have the resources and we have some very clear targets to achieve," he said, praising the proposed offshore wind farm, which he said would be located 17 miles off the coast, with no impacts on the viewshed, and minimal impacts to fishermen.

"Last year, Humboldt State University established the first commercial seaweed farm in Humboldt Bay," said Rafael Cuevas Uribe, associate professor of the Fisheries Biology Department at HSU, adding that the university is the only place in California where a student can prepare for a career in fisheries biology with a concentration on aquaculture.

He noted that this was a good opportunity for local farmers, instead of mega-corporations, to take charge. "In Arcata we know that local businesses are the key," he said. "That's what I want to create in Humboldt Bay."

Marine scientist Karin Gray, a consultant with GreenWave, discussed seaweed farming as a nature-based solution that can help regenerate the ocean ecosystem, while creating jobs and providing food.

Gray noted that the farm has already had two successful harvests of dulse, a commercially valuable seaweed. Next year, HSU hopes to start a bull kelp farm.

"Bull kelp was an obvious choice, not only because it was growing naturally in the Bay, but also because of the unprecedented decline of California's kelp forests," said Uribe. According to an HSU publication, kelp can be used for human consumption, animal feed, agricultural fertilizer and as a sustainable alternative to single-use plastic.

The loss of the kelp forests was described during the next day of the conference by Sarah Gravem, an ecologist at Oregon State University. Starfish, or sea stars, to use their proper name, have almost disappeared along the Pacific Coast over the past several years, resulting in drastic changes to the underwater coastal ecosystem ("The Plight of the Abalone," March 8, 2018). Victims of a gruesome viral disease, the sea stars once visible in every tide pool have died off, allowing their chief prey, the sea urchin, to grow and multiply without restraint. Sea urchins feed on kelp and without predation from sea stars, the urchins have devastated the kelp forests that provide food and habitat to numerous sea creatures. The results are analogous to clear-cutting a land-based forest: Nothing is left.

More than 5.75 billion sea stars have died, Gravem said, putting the creatures on the "critically endangered species" list. The exact cause of the epidemic is unknown, although sea warming resulting from climate change is suspected to be a critical factor.

Scientists and citizen naturalists have joined forces to try to save the kelp forests, with a group called the Oregon Kelp Alliance diving into the water and removing sea urchins by hand. Scientists are also trying to raise baby sea stars in captivity, where they can be kept safe from the epidemic. Graven asked audience members to report viewings of sea stars to the phone app iNaturalist, or to the website www.seastarwasting.org.

The other half of the sustainability equation is allowing the coastline to do its natural job of separating the ocean from the land.

When white settlers moved into the Humboldt Bay area, they made massive changes in the shoreline in an attempt to dry out saltmarshes and create more agricultural land. In an age of rising sea levels caused by climate change, this landscape is no longer tenable. Now, government planners are turning more and more to "nature-based solutions" to sea-level rise.

Katie Marsolan, a planner with the city of Eureka, discussed the rehabilitation of the Elk River Estuary. This forlorn section of the Elk River near the mouth of Humboldt Bay, occupies 114 acres of city property purchased in the 1980s for the development of the wastewater treatment plant. A large section of the property, formerly used as a dumping site for biosolids from the treatment plant, has been converted to pastureland. Another part consists of mudflats covered with invasive Spartina grass. The city plans to remove the tide gates from the mouth of the Elk River, allowing for more natural tidal action in the area, eliminate the Spartina, and re-configure the topography to allow public access.

The enhanced floodplain will help protect the nearby highway from coastal flooding. When completed, there will be 2.8 miles of navigable channels, areas for coastal native plants and a 1-mile extension of the Eureka Waterfront Trail, as well as a new non-motorized boat launch providing access to both the river and the bay.

The Humboldt Bay National Wildlife Refuge recently completed another project, restoring the historic flow of Salmon Creek into Hookton Slough. Previous man-made changes to the area had converted acres of saltmarsh into poor quality pastureland. With the aid of $693,000 is grants, the saltmarshes have been restored, creating more natural resilience to storms and sea level rise.

Other restorative projects are being planned for the Jacoby Creek wetland area.

There are many obstacles to community-based efforts to fend off sea-level rise. One thorny problem is the simple fact that low-income people, at least in Humboldt, tend to live in the areas most vulnerable to inundation, such as King Salmon and Fairhaven. Many of these residents are older people, whose lifetime wealth consists of the investment in their houses. Farmworkers also live in low-cost housing that is scattered across the bottomlands. Where would these people move and how could they afford to move in today's hyper-inflated real estate market?

One planner said a key will be building a lot of affordable housing, a laudable goal, but one which has proven challenging. Adam Canter, the natural resources specialist of the Wiyot Tribe, warned that the area's tribes, with their centuries of Indigenous knowledge, must be included in all regional planning.

Another problem could be the California Coastal Act, itself. Written 40 years ago to make sure the coastline remained accessible to Californians of all income levels, planners say some aspects of the law are impeding needed adaptations.

John Driscoll, the district representative for Congressmember Jared Huffman, also warned that future-oriented planning could be threatened by technologies from the past, such as a proposed coal train, which he compared to an effort defeated decades ago to bring a liquefied natural gas plant to Humboldt.

"We have some areas on Humboldt Bay that can be developed, but we don't have infinite room," he said. "We have this opportunity and we can't squander it on the old ways of doing things."