Planning commission meetings: Like karaoke minus the music, liquor and fun 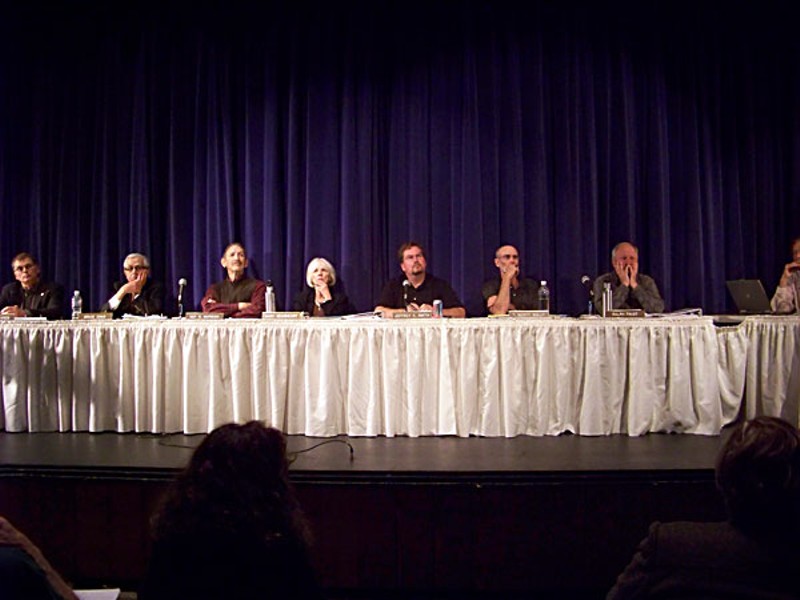 The Planning Commission feels the thrill of public discourse. Photo by Ryan Burns

That may not be the central debate currently raging over the reshaping of our "county constitution," but the casually concerned citizen could be forgiven for asking that particular question after suffering through last Thursday's four-hour blab-fest, formally known as The Continuing Town Hall Style Planning Commission Meeting to Discuss the Land Use Element of the Humboldt County Draft General Plan. (Rock ’n' roll!) Props to the commission for sitting through the fourth meeting on this element -- just one of 15 chapters in the general plan -- without blowing their brains all over the pretty blue curtains in College of the Redwoods' Forum Theater.

It's not that the issues themselves are dull. On the contrary, the land use element of the general plan will dictate where we put newcomers for the next 20-odd years -- whether it's cramming them into our miserable cities (as one side characterizes the opposition's goals) or allowing them to spread all over the hinterlands on huge estates festooned with ticky-tacky McMansions (as the other side paints the enemy plan). Members of both camps seized the opportunity to speechify before authority-types last week, and many proved unable to resist the siren song of windbagginess.

"I kinda wanted to share a moment of tears I had the other day," said a Fortuna man who had recently attended a similar meeting in Garberville. "While I was working out on my property the next day I was already thinking about my next speech." And lo, his moment had arrived. Surrounded by more than 200 of his fellow citizens, with the cameras of Access Humboldt focused in, he unraveled his tale of woe to the planning commission and staff members who sat captive behind tables on the stage below. He'd come to defend the right of his fellow rural property owners to build homes on their TPZ (timber production zone) land -- a right he believed to be in jeopardy. "I shed tears for my neighbors who haven't built a place yet," he said. He shed tears, too, for his friends, for ranchers, farmers and timberland owners, and above all, for a process that "basically say[s] people in the country are less important." Name-dropping a fellow martyr, he urged people to "get up, stand up, stand up for your rights."

Cheers rose to the rafters while the planning commissioners sat stone-faced, awaiting the next speech. Indeed, the commission remained inscrutable -- and remarkably conscious -- throughout the evening, as speaker after speaker rang alarm bells of varying plausibility: the demise of rural living, global warming, government oppression, Humboldt as the next San Bernadino and the second coming of Dick Cheney, to name a few.

"It was a missed opportunity for people to have a discussion," Jennifer Kalt told the Journal afterwards. Kalt speaks for the lobbying group Healthy Humboldt, which represents the "smart growth" side of the debate. Arguing for less sprawl and more urban infill, they tend to support Plan Alternative A, the most prescriptive and environmentally friendly set of options on the table. On the other side are the "rural living" advocates, led by the Humboldt Coalition for Property Rights (HumCPR), which aims to prevent the general plan from hamstringing the rights of private residents living on "resource lands" (meaning lots of trees grow there). They generally support either Alternative D, which would keep the rules established in the last general plan (circa 1984), or Alternative C, which would allow more land to be zoned rural residential.

Alternative B, the proposed plan, resides somewhere between A and C (though it currently leans more toward A). The final plan will incorporate elements of each alternative. Just how much remains in question. Hence the kerfuffle.

The speakers at the forum seemed to fall into social canyons formed along old fault lines: labor versus environment; rural versus urban; Mike's garlic fries versus Kyoto sushi. Those well-worn divides don't quite apply in this particular debate, however, as HumCPR Executive Director Estelle Fennell told the Journal the day after the meeting. "I think that the people who are concerned enough about the general plan to show up at these meetings have a lot of places of commonality," she said. "People who are concerned about the environment come from all sides of the discussion."

HumCPR may have been formed by property developers and realtors, but its supporting ranks include plenty of SoHum back-to-the-land enviros. Healthy Humboldt, meanwhile, doesn't advocate eliminating rural development, just limiting its total footprint. They hope to keep unscrupulous timber companies from liquidating timberlands by selling them off as massive residential fiefdoms. If you'll recall, Maxxam subsidiary Pacific Lumber tried that maneuver a couple years back as a way to avoid bankruptcy. The county's reaction -- proposing a 45-day moratorium on all TPZ construction -- prompted many property owners (not to mention realtors and investors) to cry foul. The offended parties coalesced into HumCPR and quickly set their sights on the general plan update. Healthy Humboldt, which includes HSU professors, politicians and business owners, responded in kind.

Both groups are passionate about preserving Humboldt County's beauty and unique charms, even if they differ somewhat as to how. This overlapping of values has everyone claiming the moral high ground, often while using similar buzz words to defend our "unique character" and "quality of life." Yet important distinctions do exist. At the root of the debate is the question of who should take care of the land -- government or landowners. Fennell believes it's the latter. The county, she said, should be focused "not so much on restricting rural residents as guiding people to do better resource management. ... People in and of themselves are not a blight on the landscape," she insisted. "People can actually help. That's the wise approach."

In Fennell's view, Southern Humboldt's people and towns have been overlooked and misunderstood in the planning process. Sprawl is simply not a realistic threat, she said, given the topography, demographics and attitudes of SoHum. "We just don't look or feel like Orange County, and we never will," she said.

But Kalt argues that sprawl has already happened in Humboldt County, and she's living in it. "It's McKinleyville," she said. What was once a collection of small, distinct communities (Calville, represent!) has been allowed to spread into a large, poorly planned bedroom community that remains unincorporated, she said. "If we stick with the plan we have now, we're gonna have another McKinleyville on the outskirts of Eureka and probably another one outside Fortuna. I don't think anybody wants that." Plus, she added, the roads needed to accommodate such sprawl are environmentally disastrous -- a price we can no longer afford. "The Eel River used to have 500,000 fall Chinook every year. The most recent fish count shows something like 3,000," she said, incensed. "I can't believe people aren't freaking out about this! That's what it's all about for me."

No doubt Fennell wants to save the Chinook too, but she worries that over-regulation from the government could prevent rural landowners from, say, splitting off a few acres for their children or their ailing parents. "Subdividing a parcel doesn't mean it's a subdivision," she said.

When asked her opinion of Thursday's meeting, Fennell was diplomatic. "It's something we can all learn to be better at: communicating." Regardless, she said, public involvement is vital. "Even if it's painful for some, we should have more of these meetings."

In a recent phone conversation, Supervising Planner Tom Hofweber, who was among the sober faces on stage last Thursday, explained that the Land Use Element now goes back to the planning commission (under the direction of the Board of Supervisors) for deliberation. "If they ask for additional analysis, we give that to them," he said dryly. "If there has to be more [public] comment, we open it up."