PHOTO BY PRESTON DRAKE-HILLYARD A helicopter searches for Sophia Pedreros-Parker Saturday, May 21

PHOTO BY PRESTON DRAKE-HILLYARD A bag of foliage and a framing hammer sit in a field acrossfrom Claudia Pedreros' corner home on Yamaha Pl. Pedreros was seen carrying thehammer just hours before her disappearance.

PHOTO BY PRESTON DRAKE-HILLYARD The Trinity County Sheriff’s Department and county jail where Claudia Pedreros is being held while facing the charge of murder.

PHOTO BY PRESTON DRAKE-HILLYARD Claudia Pedreros sits alongside her translator and attorney moments after entering the courtroom.

PHOTO BY PRESTON DRAKE-HILLYARD Claudia Pedreros covers a small grin as the charge of murder is read to the courtroom. 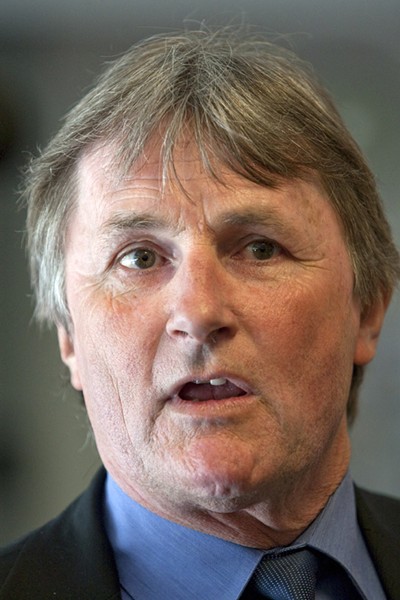 PHOTO BY PRESTON DRAKE-HILLYARD Defense attorney Russell Clanton is representing Pedreros, charged with the murder of her 2-year-old daughter.

PHOTO BY PRESTON DRAKE-HILLYARD Robert Parker, father of Sophia Pedreros-Parker, paused to compose himself before reading a prepared statement to the press. “This is a time of extreme sorrow and profound hardship for my entire family,” he said.

PHOTO BY PRESTON DRAKE-HILLYARD Defense attorney Russ Clanton briefed the media on the case after the arraignment hearing. The arraignment was postponed June 1 to allow the defense time to consider plea options.

Just two days after allegedly confessing that she'd drowned her own 2-year-old daughter, Sophia, in the Trinity River, 30-year-old Claudia Pedreros of McKinleyville appeared in Trinity County Superior Court Tuesday afternoon to be arraigned on a charge of murder.

As an interpreter read the charge to Pedreros in Spanish (she's believed to be from Chile), she laughed briefly -- a seemingly clear indication of insanity.

That's the only explanation that makes sense to most people as they try to comprehend the tragedy that unfolded last weekend.

On Saturday morning, the bright sunlight drifting through the trees of Trinity River Campground was in sharp contrast to the dark mood surrounding the search for young Sophia Pedreros-Parker. The grounds, usually a place for families to enjoy the river, had been turned into a command post for search-and-rescue teams. Deputies stood around a picnic table talking in hushed voices as Sgt. Ray Hurlburt, the search incident commander, gave orders on expanding the search. No one dared speak of the chances of survival for Sophia, who by then had been missing for 36 hours.

Less than hour later the child's body was found tangled in brush and floating half a mile downstream.

Pedreros lived in McKinleyville with her husband, Robert Parker, Sofia and Parker's father. The search had stretched more than 140 miles -- from McKinleyville, along the twists and turns of State Route 299 to the Trinity River Campground near Coffee Creek.

Multiple agencies helped with the search and investigation including Humboldt, Trinity, Shasta and Siskiyou County Sheriff's Offices, the FBI and the California Department of Justice.

Here's the timeline, as reconstructed by witnesses and law enforcement officials:

A neighbor of the Parker/Pedreros family, Ben Steffen, told the Journal that he saw Pedreros and her father-in-law arguing on Thursday, the day before she went missing. Later he saw Pedreros walk across the street barefooted with a framing hammer, which she placed in a black plastic bag with grass trimmings. The hammer was still in the field when Pedreros went missing.

At 12:30 a.m. Friday Pedreros visited an ATM in McKinleyville and withdrew money.

At 2 a.m. her father-in-law got up to use the restroom and saw Pedreros reading a book in the living room, according to the Humboldt County Sheriff's office. When he awoke at 5, Sophia and her mother were gone. He quickly filed a missing persons report.

At 5:30 a.m. Pedreros' dog was found in Willow Creek. Later that day her ID, wallet and cell phone were found near a porta-potty in the area.

Pedreros was located at 9 a.m., walking nude down Route 3 near Coffee Creek in Trinity County. Initially, Pedreros said that she did not have any children, was not married and had no idea how she had gotten to the area, according to the Trinity County Sheriff's Office.

Soon thereafter, Sheriff's deputies found her car, a silver Kia sedan, at the Trinity River Campground, about a mile north of where Pedreros was located. Children's toys and debris from the car were found on a 10-mile stretch of Route 3 leading to the car.

The search for Sofia lasted until just after midnight on Saturday and was resumed just after dawn Sunday morning. In an interview at the scene, Search Incident Commander Sgt. Ray Hurlburt said, "At this time there is no evidence that shows this child was in Trinity County, but we are still conducting searches."

Less than an hour later Sophia's body was pulled from the vegetation along the banks of the Trinity River. Once the body had been found, Pedreros either recovered her memory or simply changed her story. (Lynn Ward, public information officer for Trinity County Sheriff's Office, said that Pedreros' husband encouraged his wife to talk with authorities.)

Pedreros told Spanish-fluent agents from the FBI and California's Department of Justice that she had taken Sophia into the water, held her underneath until she drowned, then let her body drift downstream, according to a press release from the Trinity County Sheriff's office. Pedreros' blood and urine tested negative for narcotics. Family members told sheriff's deputies that she has a history of mental illness.

At Monday's arraignment, Pedreros' husband, Robert Parker, wept openly while reading a brief statement. Through his tears he said, "This is a time of extreme sorrow and profound hardship for my entire family." His shoulders drooped and he covered his face while he tried to compose himself. Eventually, he continued.

"Sophia was in life, and will always be in our hearts, a remarkably beautiful and brave little girl. She brought such light into this world and I feel truly blessed that I had the opportunity to spend even such a brief time with her. I miss her terribly and the emptiness she leaves behind serves to remind me how precious and fragile life actually is."

Arcata defense attorney Russell Clanton, representing Pedreros, asked the court for more time to consider a plea for his client. He characterized Sophia's death as "a tragic accident." The arraignment was postponed until June 1.