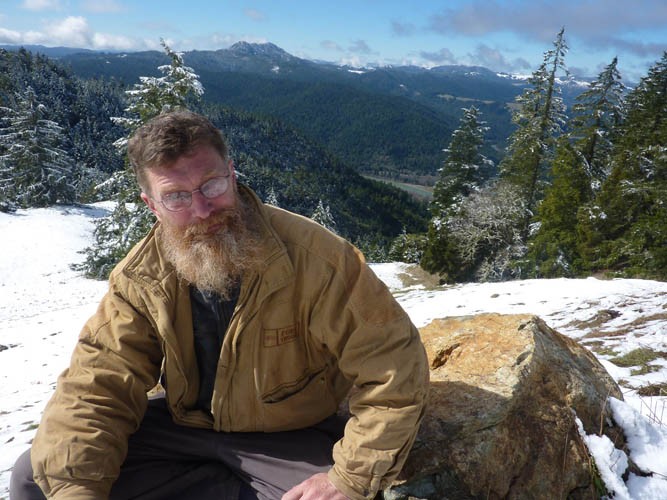 On a snow-covered hillside above Phillipsville, rancher and community activist Chris Weston shares one of his hobbies: creating a walkway of petrified stones on a slope so steep a strong hiker would probably have to scramble up on all fours.

“I call it my stairway to heaven,” said Weston, 53, principal organizer of the Eel River Trails Association, a group of Southern Humboldt volunteers who would like to convert a roughly 150-mile stretch of the Northwest Pacific Railroad, from Willits to just south of Eureka, into a trail.

Under the rail-to-trail conversion laws enacted by Congress, a trail designation would allow such non-motorized uses as hiking, biking and horseback riding The conversion process is designed to preserve the public right-of-way so that if a motorized transit system -- railroad sounds so 19th Century -- should ever prove practical, it would have the right to return.

Locally, this rail-banking process would preserve the railroad’s right-of-way from Larkspur in Marin County to just past Blue Lake. Under the rail-banking rules, however, the entire right-of-way must be designated rail or trail so as to preserve this public corridor -- even if the public use turns out to be hiking trails or skateboard runs.

Weston said he founded the Eel River Trails Association to give Southern Humboldters a forum to attempt some of the conversions already being planned or carried out in the Eureka-Arcata-Blue Lake area.

Since it officially debuted before Christmas, the Association has collected over 8,000 signatures on a petition and, more importantly, drew support from civic and elected leaders countywide. His allies are impressed with how much Weston has been able to accomplish in such a short time.

“I would say the odds of success are 35 to 40 percent and rising,” said Fortuna businessman Bill Thornton, who is also president of the Humboldt Watershed Council, which is considering an alliance with Weston’s young Association.

Thorton said Weston has shown remarkable tenacity, as evidenced by an organizational meeting last Tuesday in Scotia that drew folksy Susan Combes of the Humboldt County Fair. She noted that even if the Association gets past all the paperwork obstacles, the project will need the support of adjoining landowners -- who may not have much of a legal say but sure would notice if folks start biking, hiking or galloping through their lands.

“The ropers and the dopers are going to say the same thing about this,” Combes told 50 or so Humboldt leaders in attendance. She said supporters would have to get “boots on the ground” to convince rural landowners that the plan is good for them and not a highway for trespassers.

Weston seems eager to confront that and the myriad other difficulties that will present themselves as the conversion effort proceeds. He hopes to talk to skeptical landowners about how horse riding and pack-animal expeditions might become profitable and rewarding businesses. Addressing the scale of the project -- removing 150 miles of track and creosote-soaked rail ties -- he says national rail-to-trail groups have tentatively offered to perform this extraction.

If the project demands an unusual degree of persistence, Weston’s background suggests that, at least, won’t be a problem. A native of Louisville, Ky., Weston put himself through college at University of the Pacific in Stockton, where he furthered his study of languages -- he now speaks seven, including Japanese, which he teaches at College of the Redwoods.

After getting an MBA from the University of South Carolina, Weston made his career in Japan and Asia, holding a variety of increasingly important positions in various manufacturing companies that sell into the automotive industry. During his travels -- Weston says he still has frequent flyer miles nearly a decade after he quit the corporate rat race -- he began buying property in Humboldt County. He said he now has several properties including the 600 acres where he lives with his soul mate and their four children. He has an ex-wife and five other children from a prior marriage.

Now this corporate-ninja-turned-trail-warrior spends his days landscaping his forest using a technique called Sakkei by the Japanese who perfected this subtle art. “I’m going to write a book about it,” Weston said. But not now, when there are bureaucratic mountains to be scaled and 150 miles of tortured rail beds to be sculpted into trails to beckon soles, wheels, and hooves.

“I’m focused, relentless, and determined,” Weston said. Let’s wish him some of the luck that seems to favor the prepared mind; he’ll need it.