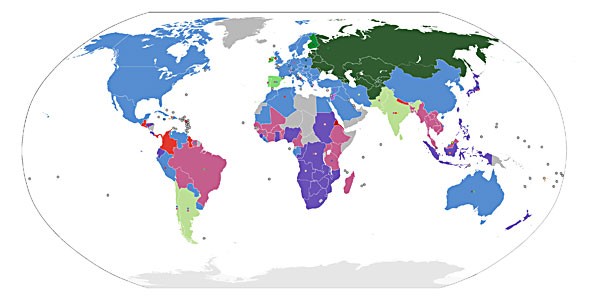 Long before the Internet made it so easy to send out the rumeur de jour ("Obama's the Antichrist!" "Onions stop swine flu!"), mimeographed pages -- remember them? -- fulfilled the same function. My office wall used to be awash with reports of the latest UFO sightings, lost treasure maps and a perennial favorite: The reason for our standard 4 ft. 8 1/2 in. railroad gauge is that it's double the width of a horse's ass.

Some years ago, this urban legend was given a boost, as it were, to encompass the size of space shuttle rocket boosters (SRBs). As the spiffed-up story goes, "The railroad from the factory [in Brigham City, Utah] runs through a tunnel in the mountains. The SRBs had to fit through that tunnel. The tunnel is slightly wider than a railroad track, and the railroad track is about as wide as two horses' behinds." In reality, the 12 ft. 1 in. diameter of SRBs bears no relation whatsoever to standard railroad gauge.

As for the rest: Most of the world's railways use the 4 ft. 8 1/2 in. "Stephenson" gauge (see map). George Stephenson (1781-1848) built the world's first steam railroad, the Liverpool and Manchester Railway (LMR), which opened in 1830. Stephenson adopted the 4 ft. 8 in. gauge then used by most horse-drawn wagonways in local mines, except he added a half inch to prevent binding on curves. With the success of the LMR, Stephenson's gauge was rapidly adopted as more lines were built using the same type of locomotives and rolling stock.

According to the story, the width of English wagonways was based on Roman chariot wheels, derived from the width of a pair of horses side-by-side. This is like much of what lands in my in-box these days: It's kinda-sorta right, or as Snopes (the fine anti-rumor site) charitably puts it, this particular rumor is true "for trivial and unremarkable reasons." Sure, chariot grooves -- in Pompeii, for instance -- are approximately the width adopted by Stephenson, and for the same reason: they were made by the wheels of horse-drawn vehicles. There was no standard chariot width (Internet rumor mill notwithstanding), any more than there was a standard wagonway width in Britain before 1830.

One non-trivial sidebar to the story: Had the Union lost the Civil War, we'd probably be using the South's predominant (before reconstruction) 5 ft. gauge. Almost all railroads in the Union used 4 ft. 8 1/2 in. while the South used many gauges -- 20, by one count. The lack of uniformity is one reason cited for the Confederate defeat.

And please don't think it's easy for me to let truth get in the way of a good story.