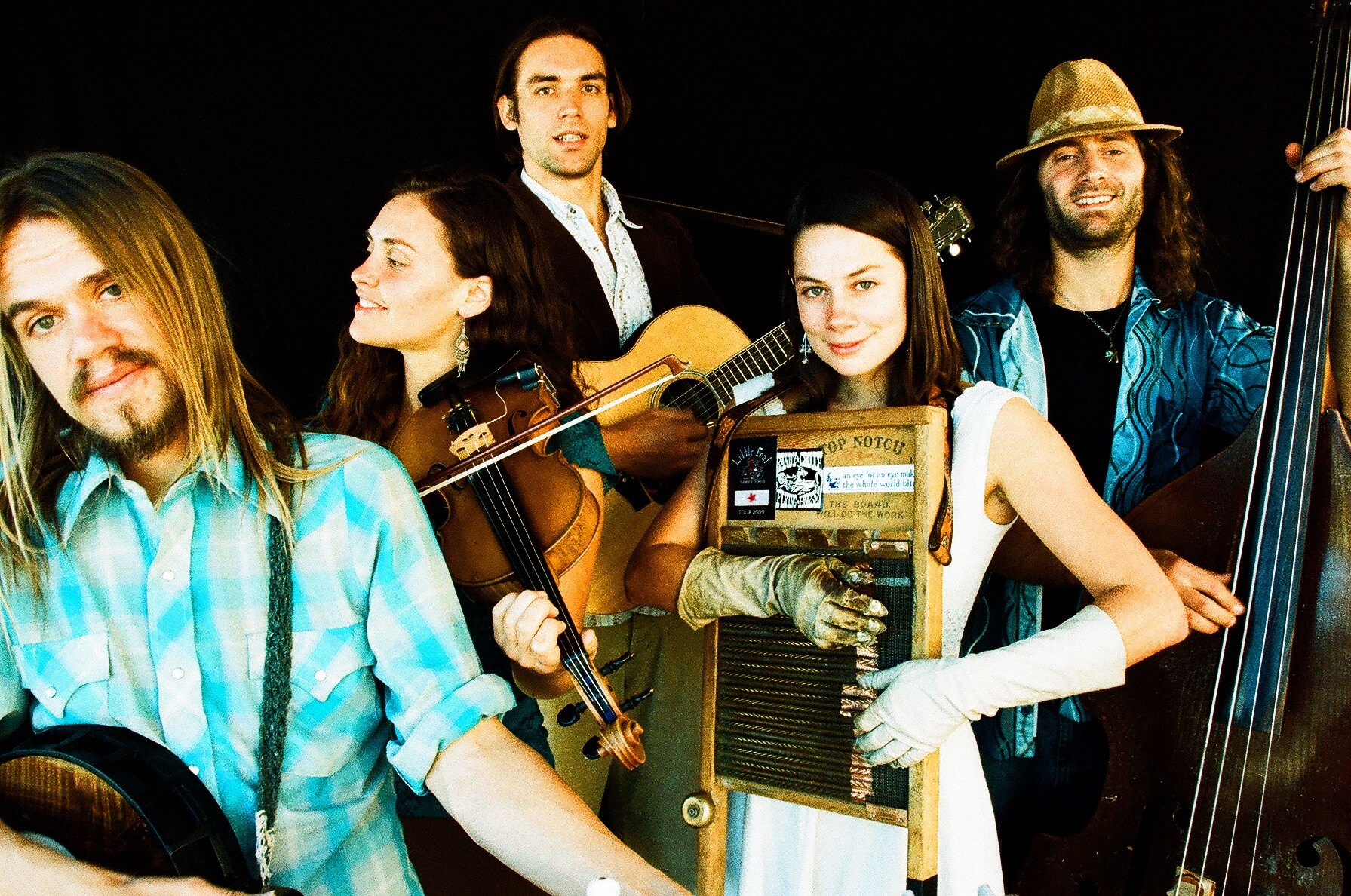 The five folks who make up the Nederland, Colo.-based string band Elephant Revival call their music "transcendental folk." The self-created genre sets them apart from typical folk and old time string bands, and sets a tone with hints of higher spiritual plains and Thoreau's transcendentalism.

But what about the elephants?

Fiddler Bridget Law tells a tale of a pair of pachyderms in Chicago's Lincoln Park Zoo who'd lived together for years. When zookeepers separated them, both died. Mandolinist/banjoman Dango Rose founded the band in memory of the fallen elephants and the "spirit of tribal nature and companionship that elephants carry with them," as Bridget explained. "We've been quite a tribe ever since. We strive for some of the beautiful elements that elephants embody: deep compassion, moving together as a group. We're a little herd. It's pretty sweet."

The band indeed sounds sweet -- string sounds weaving between close vocal harmonies, with Bonnie Paine in the lead on songs with lyrical depth.

"I love what we do, I love the music we make, I love my friends," said Bridget. "I'm grateful to be able to do what we do in this time: travel and play music and share the joy in celebration of life. We live in troublesome times, so we might as well find something meaningful. Somehow this music we're making brings people into their center. It's not party music. You don't go to our shows to see how many shots of tequila you can drink and still dance. We bring people to a place with magic in it. It's nice."

You could call their music "nice," but it's more than that. Transcendent, perhaps. Decide for yourself when Elephant Revival comes to Humboldt Brews Saturday night. Local fem-folk combo The Singing Nettles opens.

The Arcata Playhouse and Humboldt Folklife bring the amazing "folk-urban pop" guitarist/songwriter Patty Larkin to the Playhouse Saturday night. Larkin's songwriting is in the folk vein, but she's not your typical strummer -- she's electric and uses loops to craft layers of sound behind her poetic lyrics. She's been doing it for 25 years now; to mark that quarter-century, she sent out 25 of her love songs to folks she knows and loves: Bruce Cockburn, Shawn Colvin, Suzanne Vega and Greg Brown, among others. She's been touring behind the resulting 25 album, sometimes playing with those who helped reinterpret her songs, sometimes on her own. This show is just her -- but that's just fine.

This being Blues by the Bay weekend (see our Calendar for details) there's a mess of blues here and there. Friday early (7 p.m.-9 p.m.), Fieldbrook Market has Black Cat Bone, a blues band that includes my auto mechanic, Morgan. Later at Blue Lake Casino's Wave, Blue Street Junction says goodbye to vocalist Claire Bent and welcomes new guitarist Joe Antrim. Saturday, the Wave has The Red Mystics from Glendale, a blues band that includes guitarist JP Durand and bassist Liza Carbe from Incendio, plus Lisa's rhythm partner Nicole Falzone on drums and keyboardist Drake Shining. (They play earlier in the day at BbtB.) Dr. Squid opens the fest on the Bay Sunday morning at 9:15 -- kinda early, especially since they have gigs Friday at Bear River and Saturday (post-AA!) at Steve and Dave's. Six Rivers has a band I've not heard of, Bad Ass Blues, on Saturday night. We'll assume that's what they play. Chris Wixson's Speak Easy Saints are certainly more than capable on the blues, but they also mix in shades of jazz, hip hop and a whole lotta soul. S.E. Saints play an Arts Alive! party Saturday night at the Red Fox with Afromassive (think Fela), plus barbecue and live art. (SES also plays at Six Rivers Thursday night.) And for those still feeling the blues post-Labor Day, Sandy and Keith and The Lost Dogs host Tuesday's weekly Blues Jam at Jambalaya. That would be harmonicat Sandy Flippin (also an art framer) and ace ceramicist Keith Schneider. The Lost Dogs are brothers Tim and Jonathan Claasen, the rhythm section.

We can't have a week go by without some reggae. Friday at the Arcata Theatre Lounge Israel Vibration pays another visit to Humboldt, with Northtown Dub opening. Lascelle "Wiss" Bulgin and Cecil "Skelly" Spence met Albert "Apple Gabriel" Craig when they were youths in Jamaica. The three of them were afflicted with childhood polio and became friends while attending a special school. In the ’70s they formed a vocal trio singing about Rastafari and related matters. All these years later, Izzy Vibes carries on (although Apple Gabriel went solo), still singing "The Same Song."

Sunday's Concert on the Plaza (Arcata, that is) has the fine young local reggae band Synrgy.

Then on Monday, Labor Day, the Red Fox welcomes Pato Banton, a former Brit who relocated to Cali years ago. He's not a Rasta by any means, as evidenced by his latest audio book, The Words of Christ II, "a beautiful selection of soul touching lessons from Jesus Christ as revealed in the Fifth Epochal Revelation, The Urantia Book" read by the author himself. Musically, he continues what he describes as a lifelong "quest to bring Positivity to the masses around the world."

Got a note from James Harkins from The Invasions. He's doing his zombie surf thing at the Lil' Red Lion Sunday night with a new Invasions line up: "Me and Laney [his girlfriend] and a drum machine, with her adding backup vocals on every song -- very fun!" His is one of five bands, including S.F. indie rockers The Slow Trucks, The Monarchs, Hari Kari and Chung Antique. "Jeez, it's a big bill," says James. "We be opening (thanks god)."

Metal heads and hardcore punk fans have a couple of big shows this Labor Day weekend. First on Friday, starting in the afternoon, it's the Thrash in the Woods Festival at The Peg House where, say the thrashers, "six of some of the most extreme metal and punk bands from Northern California gather." That would be Locust Furnace, Verbal Abuse, Embryonic Devourment, From Hell, Chained Existence and Astknife. Then you have Saturday's all-ages Screams from the Underground at Redwood Acres (starting in the morning) with the first three bands above, plus Sadistic Hallucinations, Transient Messiah, Siphon Soul, Reverse Order, Malevolent, Lenore, Decayed Existence and The Smashed Glass. The band names let you know what you're in for. If you just want a little taste, The Smashed Glass also plays Irish-tinged punk Saturday night at the Alibi (two sets: one acoustic, one electric).

You say you couldn't make it to Burning Man? The Epic Bass Party at Nocturnum might have to do. The dubstep-athon assembles four DJs -- Hypha, ibeat, DevsteP and Snailbyte -- and undoubtedly some bigass speakers. BYO dust storm.

"We have such a rhythmic community here in Humboldt," says Jesse. "This is our stage. It's a bit percussion ensemble show, a bit choreography showcase, a bit circus, a bit playful, a bit intense, and a whole show of inspiring presentations of the continual dance of energy that is music."