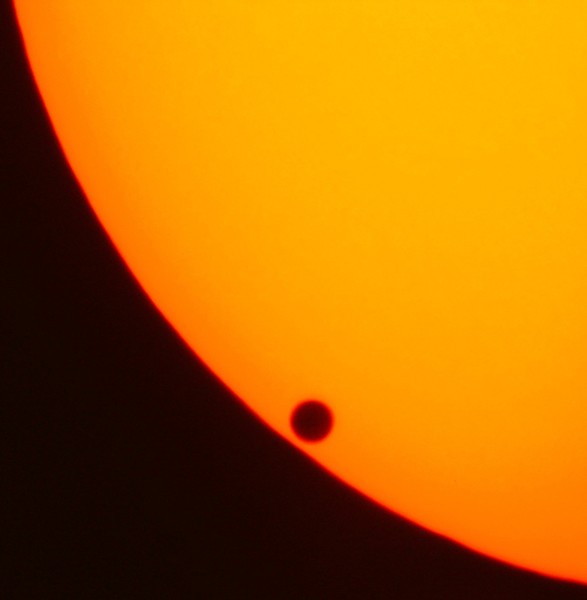 How far away is the sun? Over a period of several hundred years, the answer to this seemingly simple question was one of the Holy Grails of astronomy, and for good reason: The mean sun-Earth distance, known as the astronomical unit, or AU, is our fundamental datum for the size of the universe. It's the first step on the "distance ladder," which allows astronomers to determine how far stars and galaxies are away from us, essentially putting the cosmos into perspective.

After the publication in 1543 of Copernicus' proof, beyond all reasonable doubt, that the Earth and other planets orbited the sun, nearly two centuries would pass before Johannes Kepler showed that the relative size of a planet's orbit could be derived from the length of its period around the sun. (This is Kepler's "third law of planetary motion.") What was missing was the absolute scale, which comes down to finding the value of the AU, since everything depends on accurately measuring this one critical distance. The great British astronomer Edmund Halley, who lived from 1656 to 1742  -- and who correctly predicted the return of his eponymous comet in 1759  -- realized that a transit of Venus, when the planet can be seen crossing the sun's disk, would provide a practical way of determining the AU. This is why next Tuesday's event is so historically important.

Transits of Venus are rare. They come in a 243-year pattern, with pairs occurring eight years apart that are then separated by 121.5 and 105.5 years. The pattern derives from the resonance between Earth and Venus: 243 Earth orbits equal almost exactly -- within 10 hours! -- 395 Venus orbits. Following Halley's insight, astronomers were anxious to take advantage of the 1761/1769 pair of transits to nail down the value of the AU. In particular, the 1769 transit was observed from all over, including Tahiti, Siberia, Calcutta and Cape Town. Averaging out the results established the AU to better than 10 percent of its true value.

Due to parallax, during a transit Venus appears to track along slightly different parallel paths across the face of the sun when observed from, say, Tokyo and Sydney. These paths are very close together  -- too close to reliably measure how far apart they are. Halley's trick was to measure the difference in transit time for each observer, from which the AU can be calculated (details at www-spof.gsfc.nasa.gov/stargaze/Svenus1.htm). For instance, during next week's transit, an observer in Tokyo will see Venus take 6 hours 1 minute 33 seconds to cross the sun from "second contact" (moving inward, just inside sun's disk) to "third contact" (moving outward, just inside). The equivalent period for an observer in Sydney, Australia, is 9 minutes 15 seconds less, and that's the key to deriving the AU.

On Tuesday afternoon (June 5), it should be possible to see the disk of Venus, 1/32 of the sun's diameter, without magnification (at least for youngsters, whose good eyes can resolve to the necessary one minute of arc). The same cautions apply as for the annular eclipse, or for any solar viewing: No naked eyes! No viewing through unfiltered binocs or telescopes! See the sidebar to the May 17 annular eclipse story for tips on safe viewing. "First contact" in Humboldt occurs at about 3:07 p.m. and Venus will still be transiting the sun at sunset. And good luck: If you miss this one, you won't get another until 2117.

Barry Evans (barryevans9@yahoo.com) pessimistically assumes this may be his last transit of Venus.