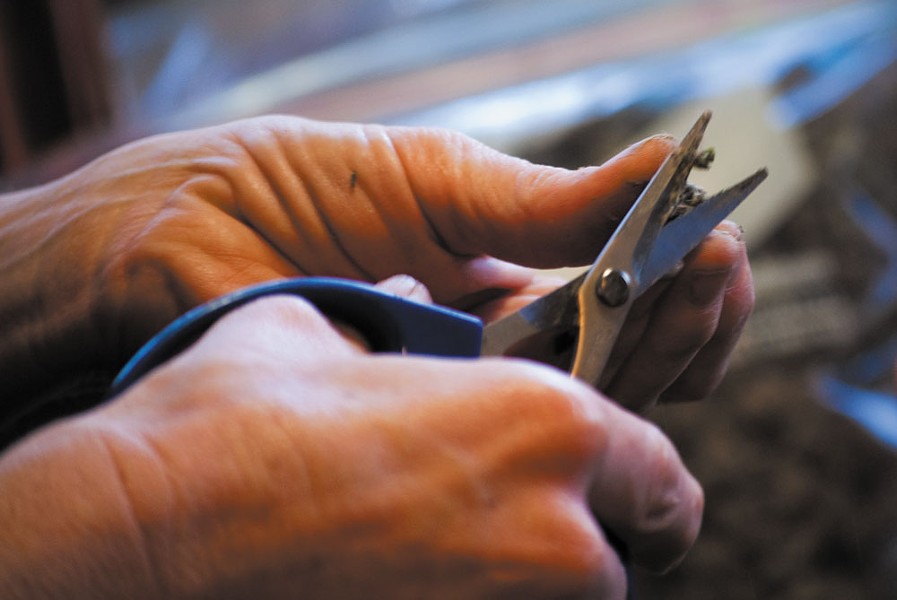 Dozens of people scanning Craigslist to find work trimming marijuana got an unexpected reply this week: a stern letter from the Eureka Police Department.

EPD Chief Andy Mills said the idea for the sting stemmed from data collected on homeless people who, until May 2, were camping in the PalCo Marsh. Mills said he was surprised to learn that "a sizeable percentage" of those who came from out of the area were initially drawn to Humboldt County by the lure of trimming jobs. Local philanthropist Betty Chinn, who has dedicated decades of her life to caring for the area's homeless populations, also said she's noticed a large uptick in the number of young homeless people, travelers or transients who say they were drawn here by the promise of lucrative work in Humboldt County's illicit billion-dollar industry.

Scores of these would-be migrant workers have been sent back to the communities from which they came, through both the county's Transportation Assistance Program and Chinn's work, for which a handful of local business owners pony up for bus tickets to get stranded folks back to their communities of origin. But looking at the little bit of data available, Mills said it's clear Humboldt County has a problem with people traveling here for work they're ultimately unlikely to get, as most growers prefer to hire locals or people they know.

"I started thinking that maybe the better way would be to try to prevent them from coming in the first place," Mills said, adding that he started with a simple question: How do people know to come here for trim work?

After spending some time on Craigslist and other online classifieds, Mills said he found a host of advertisements both from trimmers looking for work and from growers looking for help. On May 20, Mills posted an ad himself that read, "need a few capable people to weed/garden/trim in Humboldt. smokers okay, must be functional. hard work but lots of fun. call and leave a message we'll get back within a week." Mills attached an EPD phone number to a voicemail set up for the sting. Within two days, he said he'd received 100 messages.

Mills then had someone within the department call the people back, asking that they send an email with a photo of themselves — "Send us a picture of yourself so we know you're not law enforcement" — and contact information. About 50 of the initial 100 responded with the additional information, including phone numbers from about 30 different area codes, according to Mills, who added that some decided it was a good idea to submit selfies of themselves holding "sizeable quantities of marijuana."

The chief said he was initially uncertain what to do with the batch of eager trimmers. He didn't have enough probable cause to arrest most of them, as marijuana farm work exists under a haze of medical legality. Taking the sting a bit further and asking them to meet an undercover officer risked bringing folks to town only to strand them, exactly the scenario Mills was seeking to avoid.

Ultimately, Mills settled on a kind of reverse public relations ploy and on May 26 sent them all a note on EPD letterhead thanking them for responding to the ad.

"The information you provided is part of a conspiracy to cultivate marijuana investigation in Eureka," he wrote. "As you know, growing, cultivating, transporting or selling marijuana is still illegal under federal law and may be illegal under state law as well, depending on the circumstances. Eureka strongly discourages those who would desire to travel here for the purpose of trimming marijuana. Most of the grows are illegal and destroy our environment, drain our rivers and victimize our citizens. It is important you do not come to Eureka for this purpose or any other illegal purpose."

The letter warned that trimmers locally have been assaulted, murdered, forced to work in the nude, serve as sex slaves or become ensnared with transnational drug cartels. "Many trimmers have been cheated of their pay and as a result, become stranded in Eureka," continues the letter, which is complete with hyperlinks to news accounts of ills that have befallen local trimmers.

Finally, the letter concludes: "Come enjoy Eureka for its fabulous people, great restaurants and amazing scenery. We have much to offer. If you come to commit this or any other crime, we are paying attention. EPD continues this investigation. To improve Eureka, Andrew Mills, Chief of Police."

Response to the letter has been varied, Mills said. A few people cussed him out. Others pleaded that they were only looking for work. Some professed gratitude. "I am sorry," read one note Mills forwarded along to the Journal. "I will never pursue this thought again. Thank you for protecting me."

Mills said he's willing to bet that each of the 50 people who received the letter have talked about it in their social circles, spreading word that Humboldt County might not be as trimmer friendly as its reputation suggests and advising caution about who might be on the posting end of online classified ads. Meanwhile, the chief said, "I'm still getting emails."

Pleased with the sting, Mills said it's one that his officers will look to replicate on other online platforms and even in other areas, as time permits.

"We'll continue to reverse market this as a place to be for transients looking for illegal jobs," he said.