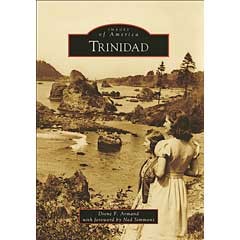 Trinidad, the latest photo book by local author Dione F. Armand, gives an insightful view of 100 rich years of Trinidad's history in less than 130 pages of images. Armand describes the history of Trinidad through the black and white honesty of vintage photographs and refreshingly concise captions -- after all, a picture is worth a thousand words. The book covers the period from the late 1800s, when the area was still inhabited by the indigenous Yurok tribe, up until the present through the impassive voice of Armand, a history teacher at College of the Redwoods.

The images and explanations of the Yurok tribe's way of life in the greater Trinidad area reinforce that well known feeling of respect and awe one feels for the towering redwoods and majestic landscape of Trinidad. Armand juxtaposes the Yurok's gentle use of the redwoods (cutting enough wood out for a canoe without killing the tree) with the rampant destruction of the highly profitable lumber industry of the early 20th century to illuminate the injustices the land has endured since white settlers landed in Humboldt Bay in 1850.

Perhaps the most compelling and sickening images in the book are those of the whaling industry. The photographs of the immense and regal creatures are brutally honest in exposing the slaughter that virtually annihilated the whale population and caused economic and population growth in the budding town of Trinidad in the late 19th and early 20th century. Trinidad shows the glory and the gory details of whaling powerfully enough that one might be tempted to sniff the book's pages just to be sure the scent of burning whale blubber wasn't preserved as well.

Trinidad displays each photograph as a window into the town's past as it transformed from a mystical wonderland of ocean and redwoods to an industrial center and finally into the local gem it is today. The robust people of Trinidad built their little town off of big whales and even bigger trees. They built lighthouses into the sides of cliffs and established houses of education and worship. Armand preserves and celebrates our local history in this book, which earns itself a place among the requirements for an understanding and appreciation of our humble little town in paradise: Trinidad.

Dione Armand will sign copies of Trinidad at Eureka Books, 426 Second St. on Saturday, Feb. 6, from 6:30-8 p.m. during Arts Alive! The author will also present the new book at the Trinidad Museum's new location, at 400 Janis Court off Patrick's Point Dr., from 2-4 p.m. on Saturday, Feb. 13. The later event is especially appropriate since Armand drew on the collection of the Trinidad Museum Society in preparing the book.