A farm stand's broken lease and its ripple effects 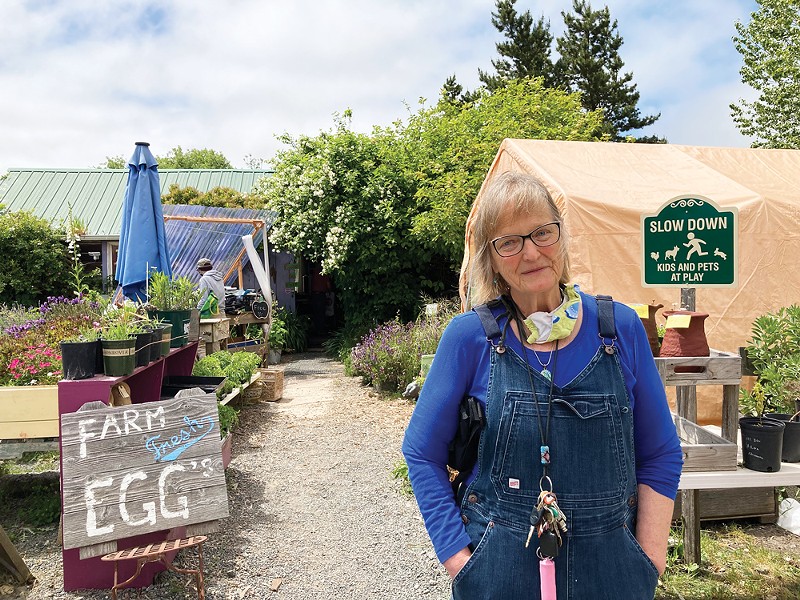 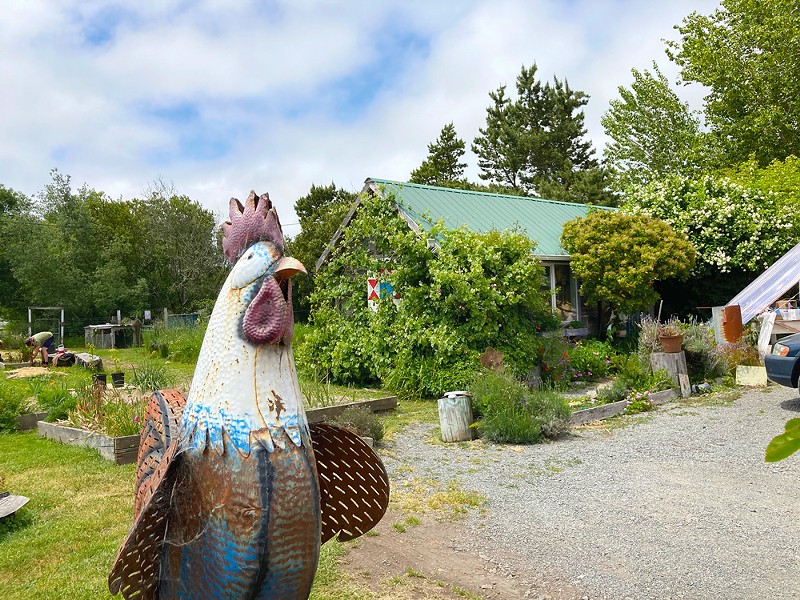 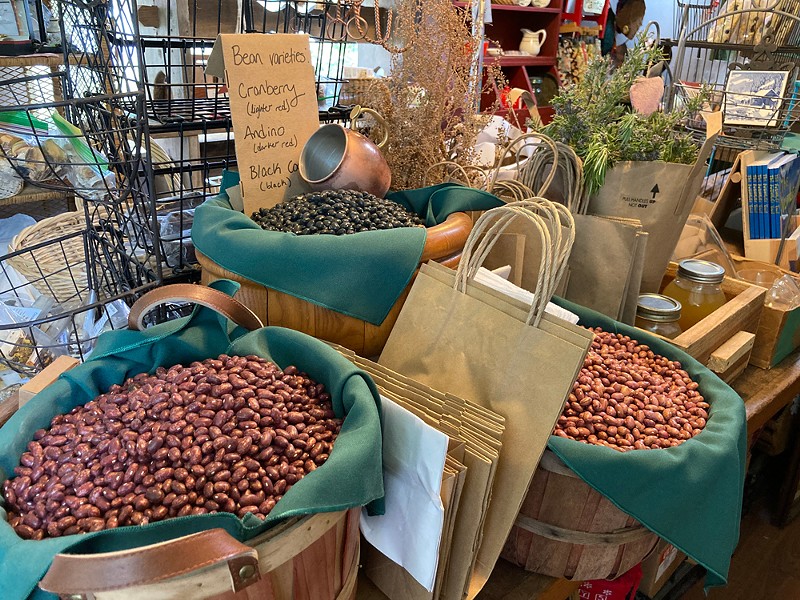 To the left of the gravel road entrance to the Freshwater Farms Reserve — 74 acres of marshland, working pastures and trails — Kneeland Glen Farm Stand's little shop is nearly camouflaged by the vines and shrubbery growing up to its green rooftop. The entrance, too, is obscured by flowering branches on one side and a stall of free items — clothes, shoes, books and VHS tapes — on the other. Inside, the tables and shelves are packed with sourdough bread, herbal tinctures and soaps, homey pies and jams, cookies and bushels of dry beans. The stock is provided by some 30 local producers, some of them farms, others cottage food businesses run out of home kitchens. Some of the produce is grown just outside in a handful of garden beds.

Last week, owner Kathy Mullen stood by the table of plant starts in a pair of overalls, updating friends and regulars on her impending eviction by the Northcoast Regional Land Trust, which owns and manages the reserve. After Mullen repeatedly violated her lease by not keeping her 25-pound dog Tootsie either leashed or off the property entirely — including one incident Feb. 7, when the dog bit a cyclist — NRLT is giving her until the end of the month to move out. The stand, and to some extent Mullen herself, has become a community hub connecting patrons and local producers, particularly during the pandemic. Both customers and vendors have rushed to support Mullen with calls and messages to NRLT, as well as a protest at the organization's offices in Arcata on May 15 with dozens of attendees. Mullen herself has seemed at turns contrite and defiant, admitting, "The truth is I made bad decisions in regards to my little, tiny dog," and vowing to fight the eviction.

A young man in a sun hat walked over from the garden beds out front and asked Mullen for a hug. She obliged, patting his back when he said, "I love you," and responded in kind.

"We're gonna fight this," she said with a little pump of her fist, "or we'll find another place where you can work in the garden."

But there may not be much to fight. Under a handwritten sign about the eviction and protest lay a three-page letter from NRLT Board President Susan Moranda, detailing each time Mullen violated the terms of the lease by having Tootsie off her leash or on the property, and each time Mullen was warned in writing that such a violation could lead to eviction. The letter describes the puncture wound and bruising Tootsie's bite left the cyclist with and the potential liability issues for NRLT. Moranda notes Mullen's "continued inability to follow our straightforward requests put in place for the safety of others" as leading to the board's unanimous decision to terminate her lease.

A few days later, after consulting with a lawyer who offered to help her pro bono, Mullen says she doesn't dispute any of it. Over the phone, she explains how a "nervous breakdown," which she attributes to the stress and expense of a recent break-in at the stand, as well as issues with her health (pancreatic cancer, now in remission) and her aging dog's health, contributed to poor choices and difficulty leaving Tootsie home. "Where we're at with this whole thing is I blew it. And I doubt I can fix it."

Still, Mullen holds out hope of convincing the board to give her another chance or at least an extension on the May 31 deadline to get everything, including her goats, out. The board's letter allows for her to tend and harvest the plants in the stand's garden, as well as those she let others use as a "community garden," despite it not being allowed under her lease. But she says she'd have nowhere to sell her produce and some plantings wouldn't be ready to pick until October or November.

Fred Diekmeyer, co-owner of Luna Farms two hours away in Redcrest, hopes the board will reconsider, noting, "It has so much other ripple effect to other members in this community." His farm not only sells produce wholesale to Mullen, it uses the stand as a CSA pickup site, making up a "significant" portion of its sales.

Humboldt Baking Co. owner Aron Walters, who attended the protest, will feel those ripples, too. At roughly 100 loaves per week, "Kathy's at least 50 percent of my sales." He's hopeful Mullen will find a new spot and that the stand will also stay open for the community and vendors.

"The building that Kneeland Glen Farm Stand occupies is a permitted farm stand facility and we don't see that use changing."

While he's unable to comment on potential new tenants, the location and its rent of less than $500 per month could prove attractive. "I envision a publicly posted application process for new lessees but that is for the board to determine if that's the path they want to take." He's less optimistic about working out a way for Mullen to remain at the reserve. While he's quick to acknowledge Mullen's contributions to the reserve and the community, he says: "After somebody says that they're going to adhere to agreements multiple times on multiple occasions, multiple incidents ... we're left with no other choice. ... Trust has been broken and I don't see how you build that back."

Another protest attendee, Cheryl Karnes, owner of Kitchen Queen, has been selling her scones and pastries steadily at the farm stand for years, sometimes working the counter. She might earn a couple hundred bucks a week through Kneeland Glen and, while she'll still sell through her website, she'd miss the Mullen's stand if it went. "I just like it so much. ... Wherever she goes, I'll be there. I'll sell my stuff — you betcha."

Mullen has stocked Granny Be Jammin jams and pies for eight years, buying the pies from owner Cindi Hebard for $6 each and selling them for $7. Hebard says it was Mullen who told her how to get a cottage food business license. Last year some 250 to 300 Granny Be Jammin pies and five to 10 cases of preserves a month earned Hebard around $2,300 a month, a helpful supplement to her Social Security checks. Not selling at the stand "will take a big chunk out but I'm tired, too," she says, and likely won't keep up production beyond what she'd sell by word of mouth and at flea markets.

Hebard isn't opposed to selling to a new proprietor but she'd like to see Mullen settled elsewhere. She's sympathetic and loves Tootsie, but says, "Dog bites are a serious thing and I don't want to get on the wrong side of anybody ... but I had to put down a dog who bit." She lets out a rueful laugh over her late dog Raisin and adds, "Never name a dog after fruit."

The financial fallout for Mullen looks steeper than for her vendors. "I'm gonna lose everything. I'll be honest with you. I have a lot invested in it and it's my income," she says, explaining that she still owes money for installing the stand's security system after the break-in and won't be able to make and sell her own soap anymore. The slim markups and relying on some vendors to pay her "maybe $20 here and there" on a loose commission system has meant sometimes dipping into her Social Security to keep the stand running, but she insists "it works." Mullen says, "People are happy. ... I'm not trying to make a bunch of money."

Mullen, who says she isn't good with confrontation, didn't attend the protest at the NRLT offices but says she saw photos of those who showed up with signs on her behalf. "It was really beautiful and touching. ... It was very sweet of people. I'm loved."

Editor's note: This story has been updated to correct Daniel Ehresman's title at NRLT and the weight of Mullen's dog.