Trouble on the Line: The Reality Part 2 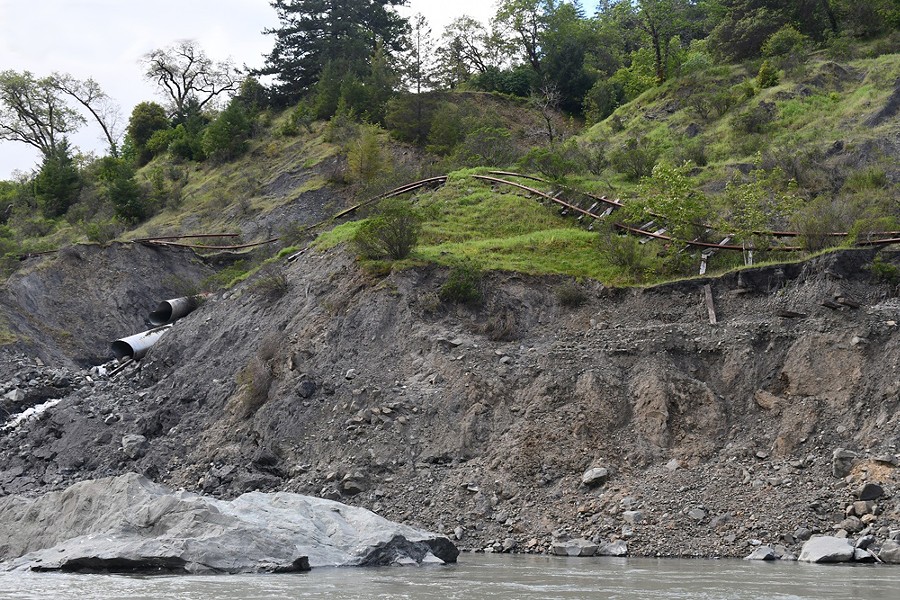 Photo by Josh Buck Washout at Bell Springs in the Eel River canyon in 2019.

"We know now that the railroad should have gone east to Red Bluff."

Last week, we looked at the 1907 decision to route Eureka's railroad connection with the outside world down the Middle Fork of the Eel River. It was problematic from the start. For many years, Northwestern Pacific Railroad repair crews were out every day during winter months. Quoting railroad researcher Josh Buck (now director of the Clarke Museum), "floods of biblical proportions, one of which caused over 30 miles of track to be swept away in a matter of days, proved to be tremendously detrimental to the railroad." Further north under the Scotia Bluffs (another dubious choice of route, deserving a column of its own), three railwaymen lost their lives in January of 1953 when a massive landslide swept the 80-ton locomotive in which they were riding into the Eel River. You can see a monument honoring them in Fortuna.

For a while, the profits from hauling Humboldt's redwood timber south overshadowed the cost of maintenance. However, within a couple of decades of its completion, the Northwestern Pacific started to run into competition from truckers on the newly completed Redwood Highway. Locomotive-hauled passenger service ran until the early 1950s, followed by two decades of self-powered "Budd" cars. Built by Philadelphia's Budd Co., each car combined a 200-horsepower diesel motor with a passenger compartment. The last scheduled Eureka to Bay Area passenger car ran in 1971. Local historian Jerry Rohde recalls taking a special day-excursion to Fort Seward in 1991 — the last time passengers rode along the Eel River — when two diesel locomotives hauled eight vintage passenger cars for the occasion. Speed was often limited to 20 mph due to the poor state of the line.

Freight traffic, always the mainstay of the route, continued, even as repeated landslides caused costly delays and repairs. Finally, on February 17, 1998, an El Niño storm event triggered many huge slides and washouts in the canyon. They were the final straws for the proverbial camel and trains would never again run from Eureka to the Bay Area. As a reminder of what once was, four (originally five; one was dismantled) marooned diesel electric locomotives still sit forlornly on Eureka's balloon track, legacies of the unsuccessful attempt by NWP's ultimate successor, the North Coast Railroad Authority, to restore service. Another entire 10-car train still sits on the rails just south of the Island Mountain Bridge.

Should those engineers have picked the alternative route down the Eel South Fork? In 1953, catalyzed by the prospect of a dam in the Eel River Canyon, engineers for the NWP surveyed three other routes, west of the South Fork, between South Fork and the Middle Fork, and east of the Middle Fork. That study was ultimately shelved, citing cost reasons. In the eyes of the NWP, it was more cost-effective to keep repairing the existing route than to invest in a new one. In any case, then-Governor Reagan finally nixed the dam project in 1969, and legislation is now in place to prevent any more talk of damming the river, while Friends of the Eel and other environmental organizations are currently calling for the removal of two existing dams upstream of the Eel Canyon.

I still try to imagine what would have happened if they'd chosen to follow the route of present-day U.S. Highway 101. Would bypassing or tunneling through the 1,800-foot Rattlesnake Summit (north of Laytonville) have been more of a challenge­ — and maintenance problem — than the Eel canyon route? Would Confusion Hill have been a deal-breaker? Would the geology of the South Fork have been even more unstable than that of the main channel? (Or, per Dan Hauser, quoted above, was neither route the right choice?) In any case, advocates of the proposed 316-mile-long Great Redwood Trail along the former NWP right of way may soon be facing the same challenges in the Eel River Canyon.

May they have better luck than those hardy old-time railroad pioneers.

Barry Evans (he/him, barryevans9@yahoo.com) wanted to be a train engineer when he was young. Still does.