New meals on wheels in Eureka and Arcata 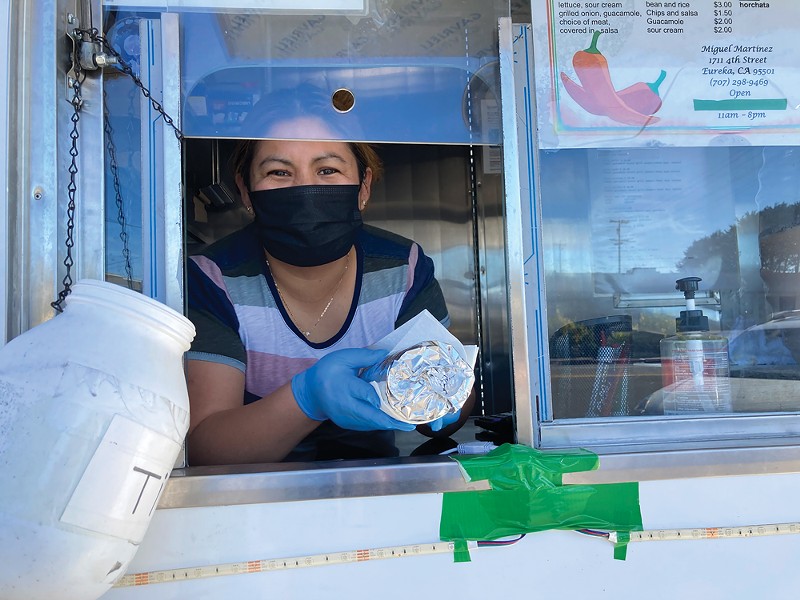 Photo by Jennifer Fumiko Cahill Francisca Vereugo serves up a burrito from the Taqueria Martinez truck.

A person could get the idea the only new food in town is the KFC luring cars into its Broadway drive-thru like sailors onto the rocks. Not so. A trio of trucks have made their debuts this month, navigating pandemic restrictions and appetites with grab-and-go and outdoor seating options.

No shade on the long-ago Shanty hot dogs but the solid food offerings have leveled up recently. A peek at the Shanty's (213 Third St., Eureka) adjacent lot finds a lit patio built by a friend of the bar and a red truck with a sandwich board menu that will allow the bar to stay open under COVID regulations.

The New Orleans offerings are an homage to owner Lynn Sandstrom's wife Rana Krueger, whose 2020 death friends and regulars marked with a second line brass band parade through Old Town. Stacie Nunes, one of the bar's managers, says, "Mardi Gras was one of her favorite bar holidays and we wanted to honor her and everything she meant to the Shanty."

To that end, co-manager and bartender Jon Fisher, with assistance from bartender and former chef Mike Vitiello, put together a lineup of hushpuppies, red beans and rice and fish po'boys, as well as a Shanty burger with remoulade. New Orleans-style Brabant fried potatoes take a tumble in garlic butter and Cajun spice, and come with sauce vert and remoulade. Order the Shanty fries and get them under red beans and andouille sausage, melted Swiss cheese, scallions and parsley.

Times, Nunes notes, are tough and the bar hopes to give its regulars a break with items priced from $4 to $11. "We tried to keep it really cheap because we know people have to buy food in order to get a drink," says Nunes. Not as cheap as a Shanty dog but close.

While the pandemic has robbed us of so many simple pleasures, getting a burrito from a truck parked at a gas station and eating it in your car in blissful solitude is not one of them. A week ago, the Taqueria Martinez parked at the Texaco station (1711 Fourth St.) on the Eureka side of the Samoa Bridge and reminded us to count that blessing.

According to his son Christo, owner Miguel Santiago worked in kitchens at Shamus T. Bones, Rita's and Taqueria La Barca before striking out on his own. On the menu are Santiago's Oaxacan and Azteca-style burritos, tacos, tortas and quesadillas, including an ochre-tinged asada marinated with chile California and mixed with grilled red onions. He's hopeful the different flavors will set Taqueria Martinez apart from other local offerings. Translating for his father, Christo says, "There's no other place you can get food like this truck."

Christo says the salsas — both the green and hotter red oil (*blots brow) — are his mother Francisca Vereugo's recipes. She makes them by first roasting the chiles, then blending them with stewed tomatoes and finishing the batch in the oven. For those skimming their fingers along the page to see if Taqueria Martinez has birria and/or lengua, that's a yes and a yes.

With insurrection fresh in our minds, you'd be forgiven for mispronouncing the name of the Couxp food truck lately parked by Pacific Outfitters in Arcata (737 G St.) Monday through Friday. But the chicken-wire detailing and the smell of Buffalo sauce should announce owner Cormac McGrady's poultry-centric mission of fried chicken sandwiches and wings.

McGrady grew up in Kneeland and says, after catching the restaurant business bug as a teenager at Los Bagels, he went on to graduate from the Culinary Institute of America and worked in a handful of restaurants around the state, Ocean Prime in Beverly Hills, Solbar in Calistoga and Seersucker in San Diego, among them. A return to his Humboldt roots, he says, led to a stint at Salt in 2019 and, eventually, the idea for a mobile chicken sandwich business. While the country was obsessed with Popeye's spicy chicken, "In my head I was like, this is not hard to do with better ingredients and sourced locally." He says he found encouragement looking around at specialized, locally sourced food trucks that were thriving, like Loco Fish Co. and Roman's Kitchen, and then found some wheels — the old Nature's Serving truck, now made over.

The buttermilk-brined and fried thigh meat sandwiches include: the OG Couxp with homemade pickles and slaw; the Buffalo sandwich; a spicy Korean version with pickled daikon and carrot, kimchi slaw and gochujang; and a take on Tennessee hot chicken, developed with the help of a Tennesseean on staff. Expect to see other hot options as Humboldt Hot Sauce pitches in with its Carolina reaper sauce. There are sides like parmesan truffle fries, and wing fans will find sticky Thai, lemon pepper parmesan, Buffalo and Carolina reaper pepper for the brave.


Editor's note: This story has been updated to reflect Jon Fisher's role in creating the menu.