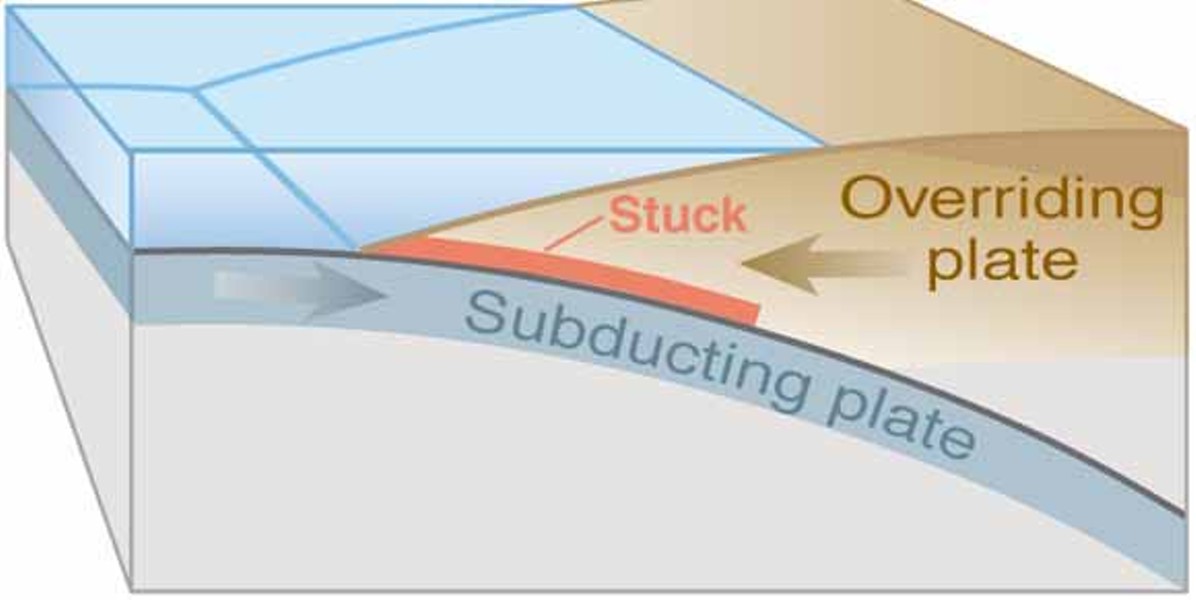 1. Tectonic plate boundary before earthquake. In the case of last week’s event, the overriding plate is the Pacific Plate (blue-gray), and the subducting plate is the North American Plate (brown). 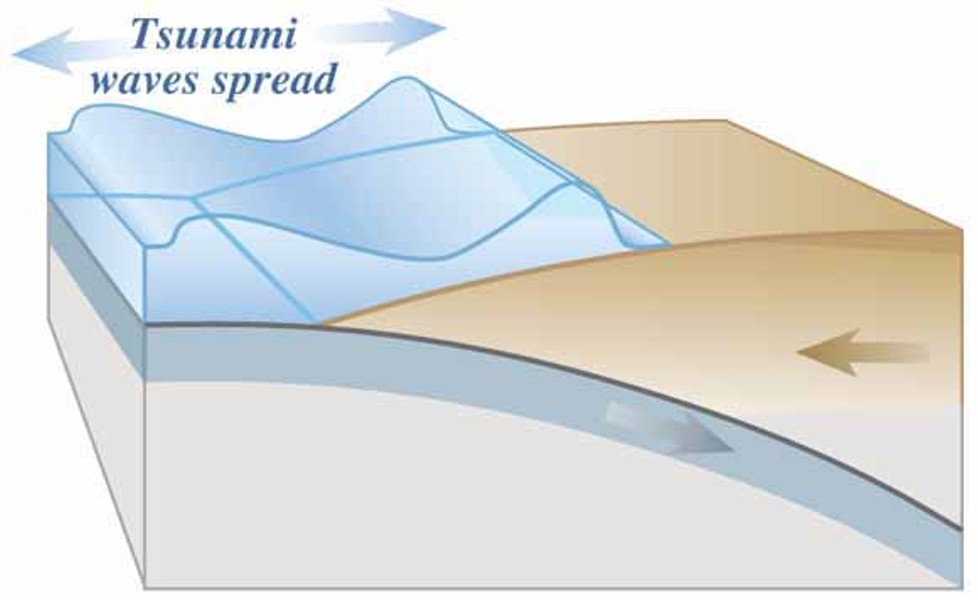 4. The energy released — as much as a small atomic bomb’s worth — produces tsunami waves. (USGS diagrams)

Sometimes it’s easier to explain something by what it isn’t, rather than what it is. After listening to the local scuttlebutt following last week’s tragedy in Japan, let's put some myths to rest:

A tsunami isn’t a single wave. It’s a series of waves, 20 to 30 minutes apart. Generally the biggest waves are not the first ones.

A tsunami won’t happen because of the San Andreas Fault —

which is a sliding, “transform” fault, where one plate slides horizontally against its neighbor. Earthquake-generated tsunamis usually originate at “subduction” faults, where the lighter Pacific Plate (80 percent of tsunamis occur in the Pacific) slides under the denser continental plate — in this case the North American Plate (Okhotsk in Japanese) that straddles the north Pacific.

A tsunami doesn’t affect ships at sea. Its waves aren’t anything like regular wind-generated ocean waves, which are typically six feet high, 100 feet crest-to-crest, and travel at the speed of the wind, perhaps 20-30 mph. Tsunami waves might be a foot high, up to 250 miles crest-to-crest, with a deep-ocean velocity of 400-500 mph. A ship may notice a slight swell, nothing more.

A tsunami wave isn’t uniform. Nearing land, a tsunami slows down (due to friction with the shallower seabed), resulting in the wave piling up as water pushes from behind. The effect is called “wave shoaling.”

A tsunami may not be heralded by a wave. Instead, the first phenomenon to reach shore may be a trough, or “drawback.” In this case, beachwalkers see a sudden drop in the ocean — it can recede up to a mile in a few minutes — before the crest arrives, 10 or 15 minutes later. This effect probably caused many deaths during the Sumatran tsunami of 2004. (Although in Phuket, Thailand, a 10-year-old English girl, fresh from learning about tsunamis in school, saved her family and others by alerting them during the initial drawback.)

Tsunamis can’t be predicted any more than earthquakes can. Once they start, however, precise predictions can be made for when the first waves will hit shore (as was done last week) but not for the wave heights.

Tsunami damage isn’t all caused by incoming water. A tsunami wave hurtling across the land at around 50 mph picks up everything in its path, as last week’s horrific videos showed only too clearly. But typically, even more damage is done as the wave recedes, carrying houses, cars and people out to sea.

Barry Evans (barryevans9@yahoo.com) recognizes that science can only say so much about last week’s event, and that the graphic videos from Japan say so much more.