Twilight of the Machines

Twilight of the Machines 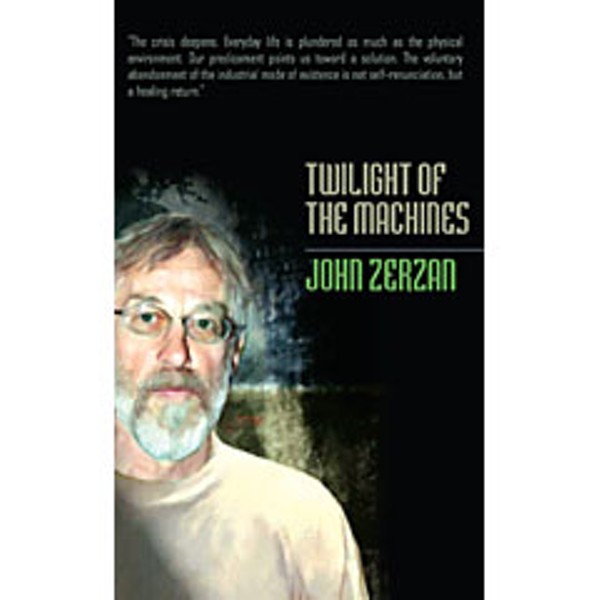 The value of John Zerzan's book Twilight of the Machines is not its fresh interpretations of Nietzsche, Marx and Freud, nor its editing (which deserved better), but rather its utter commitment as a polemic. Released by Feral House, the book seems nothing less than an attempt to initiate a paradigmatic break in ideology with Western civilization as a whole. Zerzan labels himself a "primitivist," however, this treatise seems to warrant an edgier logo. Perhaps "prehistoricist."

The title alludes to Nietzsche's Twilight of the Idols and Zerzan's book similarly assaults the logic of its eponymous subject. His argument is essentially that technology -- from language to industrialism, modernity and beyond -- is inherently oppressive to humanity. Zerzan's definition of "technology," however, may differ somewhat from current conceptions: "a system of ever greater division of labor or specialization."

Twilight's two sections, "Origins of the Crisis" and "The Crisis of Civilization" focus on the deep history of humanity and where it's led. Along with language, the origins of war, gender and the city are also addressed in part one. Part two outlines the overarching "crisis of civilization," in reference to post-modernism's characteristic resignation to the "realities" of modern existence: class, race and gender inequality, irreversible environmental degradation, extinction, genocide, nuclear holocaust.

Yet, while most commentators argue such risks and occurrences are certainties of modern life, Zerzan takes the audacious stance that none of such horrors are necessary for humanity to endure. Indeed, he holds that the overwhelming majority of our species' existence has consisted of harmonious innocence amidst a pure and benevolent Nature.

Although it may seem that prehistorical society is being romanticized, Zerzan's historical basis for this claim is made up of recent archaeological and anthropological studies finding evidence of ancient humans using fire "to cook tuberous vegetables ... 1.9 million years ago and [achieving] long-distance sea travel 800,000 years ago," whereas agriculture (plant and animal domestication) arose some 10,000 years ago, and written language about 5,000 years later. Thus, well before the impulse within humans to increase division of labor, define gender and control nature, they were traveling distances on open water and cooking food, with the seemingly innocuous technologies of boats and fire.

Whether or not the reader is impressed by Zerzan's divergent thought, his notions deserve scrutiny if only for their originality. The author has executed a re-interpretation of the idea of the polemic, as well as an apologia to the modern concept of primitivism, at the height of post-modernism. His argument invokes a reality of which contemporary people can scarcely conceive: a re-imagination of Eden before the fall. Yet, while writing this review on an iBook, it occurs to me how fundamentally challenging is this notion of living, without the technology to articulate even the concept of technology.