by Devan King and Ryan Burns 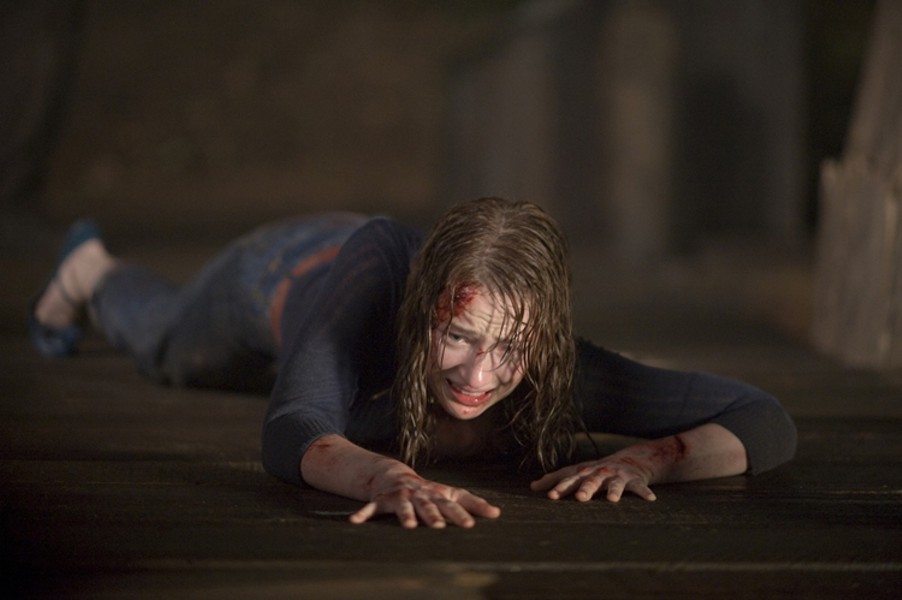 Cabin In The Woods

THE CABIN IN THE WOODS. Joss Whedon fans have been waiting three years for this film, patiently twiddling their thumbs and re-watching Dr. Horrible's Sing-Along Blog while creative minds and studios clashed over the specifics of the film's release. Whedon and Drew Goddard have set the bar high for themselves since the cult success of Buffy the Vampire Slayer, Angel and Firefly, and their fan base wields the double-edged sword of devotion to standards (hence the failure of Dollhouse). Rejoice, Whedon-ites, The Cabin in the Woods is everything you hoped it would be, plus a million things you never thought it could be.

Whedon and Goddard add fantastically disturbing new twists to a plot long considered blasé: five college kids in a remote, woodsy location, fighting for their lives. It's impossible to describe how they achieved this without ruining the experience. This isn't about giving away the ending, but giving away the entire, unexpected essence of the film. It's not about a twist at the end, but a skewing of the entire tradition of horror. The whole thing is an awesome slap in the face to the modern, mundane genre.

All of the standard horror elements are there: gore, sexuality, more gore, and people not getting out of there, even when you're yelling "Get out of there!" With every stereotypical element introduced, it quickly becomes clear that Whedon (who co-wrote the screenplay) and Goddard (co-writer/director) are only showing the mold so they can break it -- deconstruct it into something worth watching. Typical of their style, pivotal climactic moments of action are punched through with sardonic humor. The creative horror elements are so mindblowingly epic and the cast so spot-on in timing and irony that the humor is more refreshing than distracting. Whether or not you're a fan of their previous work, Cabin will exceed your expectations. R. 95m.

SALMON FISHING IN THE YEMEN. Director Lasse Hallström has a knack for heartbreak. Chocolate, The Cider House Rules and What's Eating Gilbert Grape all plucked at heartstrings. But those films came out more than 10 years ago, and Hallstrom's more recent attempts have been fair to middling. None has had the same quirky magnetism (though he came close with The Hoax). Salmon Fishing in the Yemen is Hallström's redemption.

Dr. Alfred Jones (Ewan McGregor), a government fisheries agent, is assigned to the ludicrous task of bringing salmon fly fishing to Yemen. Commissioned by a wealthy sheik (Amr Waked), Jones takes a "fundamentally unfeasible" task and turns it into a "theoretical possibility." Amid this surreally absurd plot is a love story, of course. With Jones' painfully boring marriage crumbling, he quickly falls for his colleague, Harriet (Emily Blunt). This love story is predictable but essential to the film's themes of transcendence and happiness. There are other subplots, as well, but they're better left ignored -- flimsy and distracting, attempting whimsy but achieving only cliché.

At its center, Salmon is brimming with transcendental symbols and breathtaking water imagery. The film itself flows, echoing the repeated symbolism of forging ahead, of having faith in your own ability to create inner peace. It's too easy to compare it to A River Runs Through It, but be aware: The similarities are rampant. Despite the blunt message, typical subplots and odd use of split-screen usually reserved for '90s sitcoms, Salmon warrants a viewing. The film's beautiful mastery of cool colors, witty conversation and bold symbolic imagery make up for what it lacks in originality. McGregor's bashful nerdery and thick, Scottish brogue don't hurt, either. PG13. 107m.

THE RAID: REDEMPTION. How violent is this movie? Ask the Motion Picture Association of America, which gave this bruising Indonesian martial-arts extravaganza a (well-deserved) R rating -- not merely for violence but rather for "strong brutal bloody violence throughout." Got that?

The film opens on a familiar scene: a young policeman getting ready for work (which mainly involves beating the ever-loving crap out of a heavy punching bag) while his pregnant wife lies in bed. This pregnant wife -- and the emotional depth it supposedly lends our hero (ha!) -- represents the sum total of character development here. With his humanity thus established, the rookie cop joins his fellow SWAT team members for the eponymous raid.

The setup is dead simple: A notorious drug lord lives on the top floor of a rundown Jakarta apartment building -- a dimly lit labyrinth filled with gangsters, thieves and a few unlucky civilians. Once inside, the invading SWAT team blows its cover, turning the high-rise into a rumbling tower of violence.

And, oh, what tremendous violence it is. Star Iko Uwais, who practices a rapid-fire, limb-cracking form of martial arts called pencak silat, did much of the fight choreography himself, and while a few bodies fall prey to machine gun fire or the like, most are dispensed via hand-to-hand combat. The prolonged fight scenes offer an impressive display of athleticism and creativity, and unlike old Bruce Lee movies the death blows are frequently graphic, complete with snapped spines and hissing arterial spray.

This proves exhilarating for, oh, about 30 minutes. With such a thin plot and virtually no character development, the movie soon loses its kinetic momentum. Our hero may have boundless energy, dispatching one opponent after another while absorbing enough abuse to liquefy a side of beef, but for the audience, the ceaseless onslaught proves exhausting. And, worse, tedious. Indonesian with English subtitles. R. 101m.

THE LUCKY ONE. Based on another weepy from author Nicholas Sparks (The Notebook), this film stars Zac Efron as an Iraq War vet pursuing a woman (Taylor Schilling) whose photo he believes was his good-luck charm. PG13. 101m.

CHIMPANZEE. This Disney documentary follows a painfully adorable young chimp who gets taken under the hairy arm of a full-grown male. Narrated by simian actor Tim Allen. G. 78m.

Tuesday evening at the Humboldt County Library's main Eureka branch, the Based On The Book series climbs aboard Alfred Hitchcock's Lifeboat (1944), based on the novella by John Steinbeck. Hosted by Jan Ostrom. 6:30 p.m.

AMERICAN REUNION. The actors from American Pie gather to collect money and reminisce about the pinnacle of their careers. R. 113m.

THE HUNGER GAMES. In a dystopian future state, teenagers get conscripted into a televised death match. Based on Suzanne Collins' bestseller. PG. 142m.

LOCKOUT. In the near-future, a falsely convicted former government agent must rescue the president's daughter from space prison. PG13. 95m.

PROJECT X. You know the party is off the hook when the angry dwarf gets stuffed in the oven and the drug dealer grabs a flamethrower. Sigh. R. 88m.

THE THREE STOOGES. Larry, Curly and Moe find themselves in the 21st century. Frightened, they resort to sound effects and slapstick violence. PG. 92m.

WRATH OF THE TITANS. Perseus, a yoked demigod, stabs 3D computer images with his trident in order to save his "holier than thou" dad, Zeus. 99m. PG13.