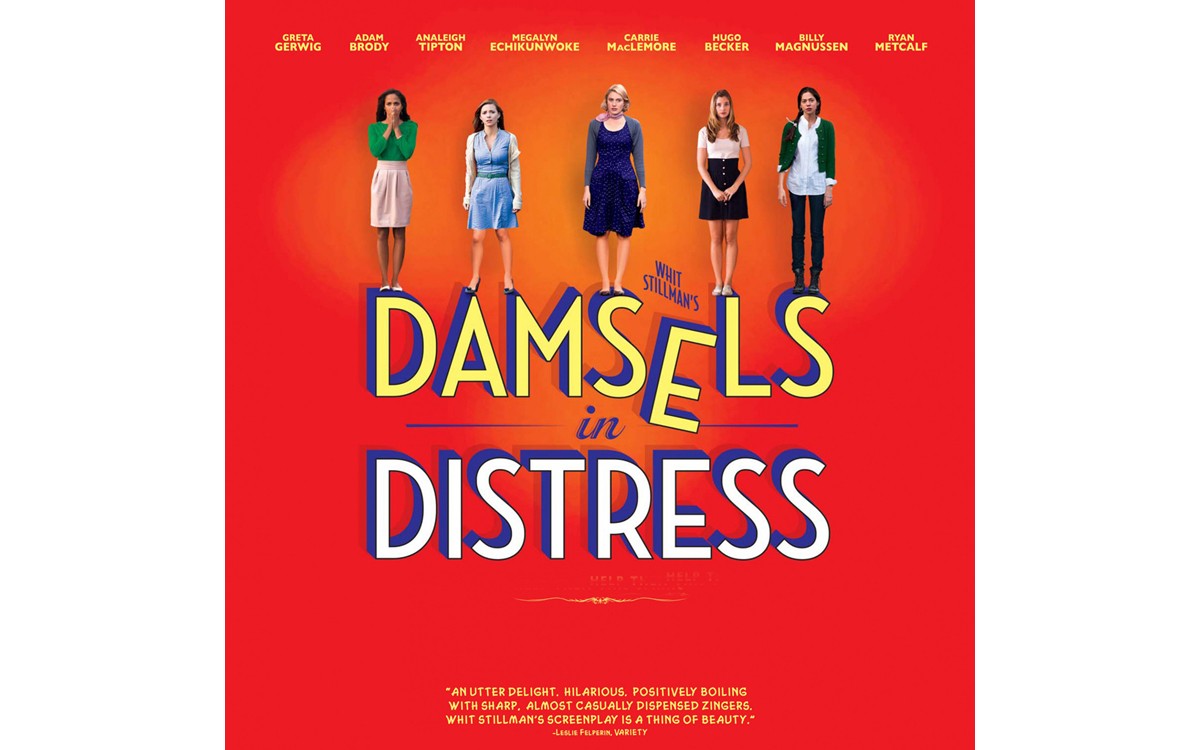 A pair of worthy films that did not play in local theaters are now out on DVD:

Damsels in Distress. In Whit Stillman's first film since The Last Days Of Disco, a private East Coast college is watched over by a group of young philanthropists in training, headed by Violet Wister (Greta Gerwig). These preppy "perfume obsessed" and ultimately well-meaning girls believe that the high suicide rate at the college could be curbed by teaching depressed dorm dwellers and frat boys proper hygiene -- and giving them parts in tap dancing musicals. The girls declare war on the journalism department when the school paper suggests that the college's elitist frat house be shut down. When Violet comforts a lovelorn girl by advising her to lower her standards in men, the girl takes her advice by stealing Violet's clueless, "not very good-looking" boyfriend, which sets Violet on a downward spiral. Although this takes place in the same upper class East Coast world as Stillman's critically acclaimed Metropolitan, this film's humor is less dry and more like a classic screwball comedy. Once the absurdity sinks in, Damsels is hilarious, gently mocking its characters without feeling mean-spirited. (Recommended for fans of Wes Anderson.)

The Woman in the Fifth. Ethan Hawke and Kristin Scott-Thomas star in this unnerving psychological thriller from Polish director Pawel Pawlikowski. Tom Ricks (Hawke) is an American novelist attempting to settle down in Paris to be near his young daughter, despite a restraining order placed at the request of his ex-wife. The Paris here is not one typically seen on the big screen; it's a seedy vortex that calls to creative people like a siren, then eats them alive. Ricks' belongings are stolen as soon as he arrives; he ends up staying rent free above a rundown Turkish café whose owner tells him, "You're American; I trust you." The proprietor gives him a mysterious job that involves sitting in an underground room somewhere in the city, watching a security camera and only letting in people who ask for "Monsieur Monde" (Mr. World). Ricks soon notices screams, bloodstains in the hallway and electrical drains that make the lights dim, but he continues to do his job. In his off hours, he begins an affair with a haughty widow (Scott-Thomas) who is the muse of a Hungarian poet, and things get even stranger. Despite his intriguing new life, it seems Ricks is only able to write letters to his daughter. This is a film that leaves much to the imagination, which can be either refreshing or frustrating -- perfect for fans of offbeat thrillers with a strong sense of place.