Two for the Holidays

The Nutcracker Ballet and ‘Twas the Night Before Christmas 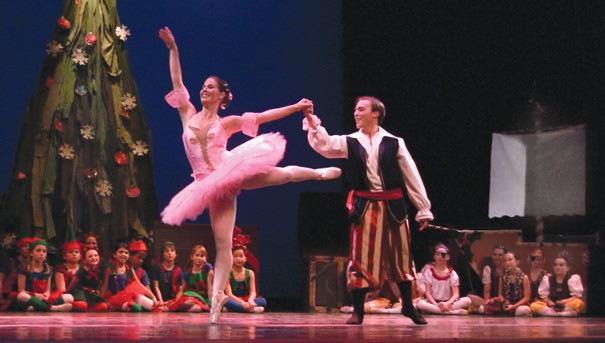 People in Humboldt County are dancing. Toddlers, school children, teenagers and adults have caught the bug. How potent the ritual of dance class and rehearsal! I spent decades following Terpsichore, the muse of dance. She is alive and thriving, entering dancers' dreams right here, right now, where we live.

The evidence: two fully staged holiday ballets with what seemed like casts of thousands. Both works, Erin Fernandez' original ‘Twas the Night Before Christmas and the traditional Nutcracker Ballet, staged by Danny Furlong and performed by North Coast Dance, were voraciously danced on the big stages of the Van Duzer Theater and the Arkley Center. To properly review these works I enlisted the keen eye and 11-year-old aesthetic of my son Lonnie. These holiday shows are meant for children, after all.

Fernandez' ballet begins with Uncle (Kevin Sharkey) reading the familiar poem by Clement C. Moore to his nieces as dancers bring the text to life. [Ed. note: Fernandez is the daughter of Journal co-owner Carolyn Fernandez.] Act One highlights the youngest dancers. Who doesn't love tiny darlings in lavender fairy wings frenetically springing about, sunny lemondrops bouncing every which way and munchkins in shiny costumes shaking their tushies to "Hot Hot Hot?" The teachers at Fernandez' studio clearly work well with children and the kids seemed to be having great fun up there under the bright lights.

Lonnie's favorites were the Latin numbers, a specialty here, and, of course, Santa and the reindeer. We both enjoyed the set, a sparkly foil tree that towered across the back of the stage, providing an entrance and exit point for the dances.

Things really took off in Act Two of the Christmas Eve tale when the toys came to life. The studio's Trillium Dance Ensemble performed beautifully en pointe. In particular, Lindsay Bond (Gingersnap) was exquisite, her movement articulate and buttery at the same time. My favorites were the "Bellerinas," bright and funny 7-year-olds in bell-shaped dresses with hoops in the hem that made the costumes wobble as the girls twirled. The music, "Carol of the Bells," was easy for the youngsters to follow with their own canons. I've never seen such clear lines on the arms of kids this age.

Lonnie hooted when a pirate ship sailed onto the stage (he's into pirates). "What made it so good," he concluded later, "was that it wasn't all ballet dancing." A great story unfolded as the pirates stole the star from the tip of the tree, while a romance ensued between the dashing, vulnerable Pirate King (Kyle Ryan) and the Ballerina Doll (Julie Ryman, an outstanding dancer who stayed in doll-like character throughout). Elves, mice, reindeer, bellerinas, cats, princesses and other good-guy characters battled it out with the pirate crew until the star was back in its rightful place. What a romp of a finale.

In terms of Fernandez cementing her own full-fledged holiday tradition, many sections already have a classic quality. However, I think she should distance herself as far as possible from Tchaikovsky. The Nutcracker doesn't own the market on peppermints, and we love the red pointe shoes, but it would be better to avoid musical selections from that ballet. (The first act could be tightened up a bit, too.)

Everyone performed wonderfully in the first-act party scene in North Coast Dance's classic Nutcracker. Danny Furlong played a terrific Dad. Still, it could have been livelier. This is a tough one: We've heard the music a million times. The party scene has been done and done and then done again. I don't envy any director who has to put up a fresh Nutcracker every year.

Furlong always has new twists, and even more importantly uses his talent well. This year he doesn't have many students en pointe. He solved the snow scene by using a quartet of dancers en pointe interwoven with a core of soft-slippered girls carrying huge wonderful snowflakes.

I had to hold Lonnie in his seat as Iris Van Atta descended from the heavens on a swing a la Esther Williams. (He's had a crush on her ever since she served him an ice cream cone at Bon Boniere when he was 6.) Van Atta has grown into a lovely woman and a gracious dancer performing a coveted role in balletdom, The Sugar Plum Fairy. Most striking was how comfortable she was in her body. A givingness in her being transcended the stage. I couldn't stop crying.

Brenna Killoran as Clara was great at pouting and being frightened. Lonnie loved the battle scenes with the Rat Queen and the grand men's sections. Again, Furlong used his talent well, from company members and apprentices to guest artists. We were riveted every time the Arabians (Marlo Basset and Darren Devaney), took the stage -- arms and legs for eons, all length and grace and sinewy strength. Emily Claypool (Chinese) and Elisabeth Poston (Butterfly) were captivating. Lonnie found Allen Arnold's fluid Drosselmeyer quite mysterious.

This Nutcracker has its own theater; it needs its own tree. The party scene in particular needs a real tree, or a real-looking fake tree with glittering ornaments. The scenery could use some bedazzling, too. Stunning costumes by Anna Cherekovsky, exciting ensemble sections, a farmyard of adorable animals, a killer finale -- all against a dull backdrop.

And what would be the sugar on the plums? True ballet believers raising funds for a small orchestra. Live music is expensive, but can you imagine it? Walking into the Arkley wearing holiday finery, full of holiday cheer and sitting down in a hall filled with family, neighbors, and acquaintances -- and the sound of an orchestra tuning.