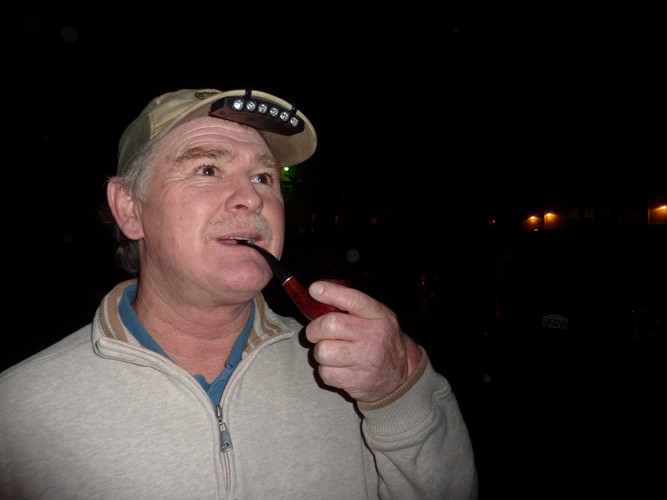 My Saturday night hit a bump when the Humboldt County Tea Party Patriots refused to let me hear former Arizona sheriff Richard Mack argue for a strict interpretation of the U.S. Constitution at a well-attended fundraiser at the Fortuna Veterans Memorial Building.

Truthfully, I could have gained entry by paying the $10 suggested donation, but since I was there as a reporter I thought I should be admitted free. The organizer said media access had been available earlier, before the speech, but as I had arrived late, after the speaker had ascended the podium, I could either pay or wait outside.

I mulled my options. His website, SheriffMack.com, outlined his views: He favored the right to bear arms, opposed regulations to suppress the sale of raw milk, and railed against seatbelt laws, believing that Americans have the right to either buckle up or go splat in auto accidents.  So he was not the mystery. What I had wanted to know was what drew Humboldters to this event?

As I wandered the parking lot, I met a 50-year-old commercial painter from Southern Humboldt who had driven up for the event but, like me, had arrived late and was now debating whether to pay $10 to hear the tail end of the speech.

So I offered to buy Gary Adamoski a beer at the nearby Playroom Bar where he slowly revealed what had drawn him to what would have been his first Tea Party event, had I not spirited him away.

It may not have helped our trust issues that I kept leaning close and whispering in his ear, so much so that he gave me a funny look at one point.

"I can see you're a touchy-feely fella but I guess that's just the way you are, isn't it," he said, continuing his political analysis.

"There's a darkness on the land, a chaos and a fear and a confusion, that's what it is," Adamoski said and I nodded.

He interviewed me as well, trying to discover my political leanings. "You're a liberal progressive, aren't you?" he asked, and it was close enough so I nodded.

By the time we walked back to the Memorial Building people were streaming into the parking lot. By then Adamoski and I had found some common ground. We agreed that extremism was a scourge and that left and right sometimes bent over so far backwards as to touch one other.

He smiled, for instance, when I complained about these home-schooling, leftie moms I know who not only drink raw milk but refuse to vaccinate their kids because they believe the discredited link between shots and autism -- putting them a six shooter and a seatbelt away from Sheriff Mack so far as I'm concerned.

But Adamoski bristled when I asked how this gun-toting Arizonan dared show his face in California given the recent tragedy in their state. "The liberal media was quick to point fingers," he snapped and I backed off.

There was the divide: I was press and he was not. It was the same distinction that I had raised at the door, though Adamoski didn't know it. This presumed advantage rankled Adamoski who said: "There's no such thing as a journalism degree. Anybody can be a journalist."

So we said goodbye and headed home to our opposite worlds, him to Miranda, me to McKinleyville. I spent the drive home mulling what I had learned when I asked Adamoski for his e-mail address. He told me that he and his roommate had sold their shared laptop to help pay for his roommate's chemotherapy. I didn't probe. Adamoski had declared his opposition to even the mild version of European-style socialism implicit in Obamacare. I left Fortuna admiring the Spartan consistency of a position that holds if Americans have a right to be hurled through a windshield, surely the Founders intended that they hock everything, or hold chemotherapy bees, rather than allow  the federal government to stamp "BUY INSURANCE" on every American forehead as the central planners drive us over the edge toward universal coverage.