Caltrans A slide in February covered the highway at Last Chance Grade. 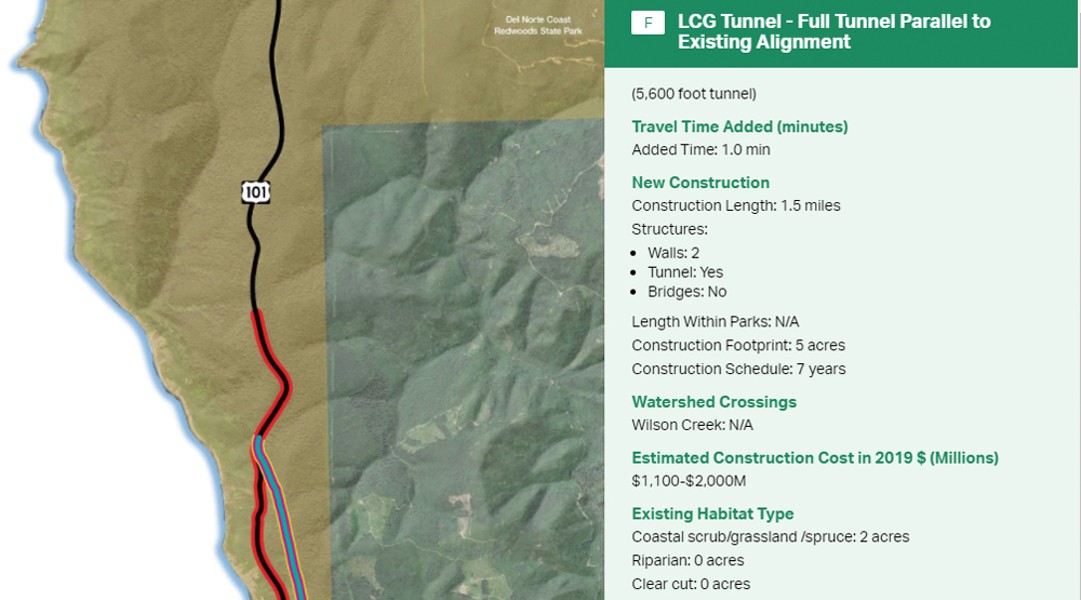 This has not been a good year for Last Chance Grade.

The notoriously unstable stretch of U.S. Highway 101 just south of Crescent City in Del Norte County has been closed several times in recent months due to landslides, stranding travelers, cutting off commerce and — for a time — preventing school children who live south of the closure site from getting to school.

Motorists trying to traverse the 3-mile section of roadway that serves as a major artery between the northernmost reaches of the state to points south are still facing sometimes lengthy delays as Caltrans works to shore up the most recent geological activity in an area with more than 200 documented active landslides.

Should a catastrophic failure occur, Del Norte County alone stands to lose some $300 million to $400 million per year in economic productivity, along with an estimated 3,000 to 4,000 jobs.

But officials recently announced a major milestone in the decades-long effort to find a solution to the Last Chance Grade dilemma — a list of seven potential alternatives has been narrowed to two final contenders.

"The decision will allow Caltrans to concentrate its work on necessary, superior alternatives and avoid wasteful analyses on routes that studies have already shown are not viable," North Coast Congressmember Jared Huffman said in a news release. "This will save money, but more importantly it will save time and get this critical infrastructure over the finish line sooner."

One of the routes — known as Option F — detours traffic around the most problematic portion into a 5,600-foot tunnel before returning back to the current alignment of U.S. Highway 101. The cost? An estimated $1.1 billion to $2 billion, with a construction timeline of seven years.

The other — called Option X — would be what the announcement describes as "a landslide mitigation alternative along the current route — permanently shoring up slopes and hillsides," including the construction of around 15 walls, at a cost of $300 million. The construction period is half that of option F at three and a half years.

"The Last Chance Grade is the lifeblood for Del Norte County. Relying on temporary fixes just isn't acceptable," state Sen. Mike McGuire said in a release. "We all want to start moving dirt on a new route ASAP and narrowing down the alternatives is another big step in the right direction. You can count on all of us to continue a full-court press on this critical project in the months and years to come."

Engineering and environmental data gathered over the past year helped inform the selections — made with input from more than 80 people from more than 30 agencies with permitting and regulatory authority as well as elected officials, businessowners, tribal governments and others, according to Caltrans.

A narrowed field now eliminates the need for studies and analysis on the other previous options. That, according to Caltrans, is expected to shave $10 million off costs moving forward and bring whichever choice makes it to the end a year closer to completion.

"This decision by our stakeholders gets us another step closer to a safe, reliable and sustainable solution at Last Chance Grade," said Caltrans District 1 Director Matt Brady. "Narrowing the alternatives will reduce the schedule time by concentrating our efforts to a smaller study area. We are so grateful for the support of the many participants involved in this process."

But there's still a long road ahead.

The environmental review process and the ultimate selection of an alternative is now expected in 2025, with an estimated opening date of 2038 or sooner.

So, in the meantime, Caltrans will be tasked with the seemingly never-ending work to maintain the desolate stretch of roadway on which so much depends. Over the last 25 years, the price tag has been in the tens of millions to keep traffic moving on the highway, which has shifted some 50 feet west since 1937.

Of course, landslides are nothing new at the site, which came upon its ominous name when one dubbed Last Chance Slide came down on the original wagon trail built in 1894.

When the current route was started in 1933, the instability was a constant barrier and caused countless delays. While there were discussions even then about moving the road inland, none took root, mainly due to cost.

So, what's next? A lot of studies and surveys accessing the impacts of each alternative, with a plan to have work on the necessary environmental documents beginning next year and a draft version going out for public comment in 2023.

"Caltrans will then coordinate with stakeholders as we decide on what alternative to select," agency spokesman Myles Cochrane said in an email. "We will have an open and engaging process that considers how the alternatives measure up in terms of performance measures that have been selected by stakeholders. Key performance measures include safe and reliable operations of the highway, impacts to environmental resources and costs to build, mitigate and maintain the finalized route."

If all goes well, some 100 years after the highway was first being carved into the towering cliffside, a new or altered route will be completed.

"I'm encouraged to see progress, especially speeding up the project," Assemblymember Jim Wood said. "I know this has been a long process, but one that can't be avoided because of the complexities of this huge project. I appreciate the participation of the many stakeholders and the patience of the public as we work toward the best solution."

Kimberly Wear (she/her) is the Journal's digital editor. Reach her at 442-1400 extension, 323, or kim@northcoastjournal.com. Follow her on Twitter @Kimberly_Wear.