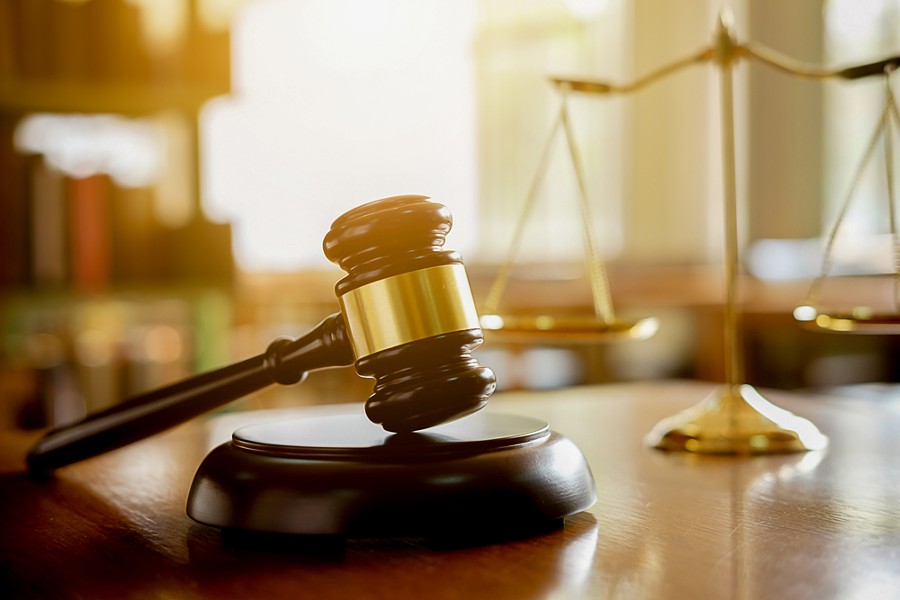 A professional misconduct case against two county attorneys accused of serious ethics violations for their handling of a local right-to die case is now in the hands of a California State Bar Court judge.

Blair Angus, who retired in 2019 as assistant county counsel, and Deputy County Counsel Natalie Duke each faces a series of charges, including moral turpitude and failure to uphold the law. Both deny any wrongdoing.

The disciplinary matter centers on the State Bar's allegation that Angus and Duke mislead the court to move forward legal actions on behalf of Adult Protective Services and the Public Guardian's Office against Carlotta couple Dick and Judy Magney, which enabled the agencies to temporarily seize control over Dick Magney's medical treatment and later all aspects of the Navy veteran's life — including his finances and where he lived — over his wife's objections and in violation of his advanced care directive.

The couple ultimately prevailed and the county of Humboldt paid $1 million in 2019 to settle a civil rights lawsuit stemming from the APS proceeding, although the county did not admit any wrongdoing by the named employees, which included Angus and Duke.

Now, State Bar Court Judge Phong Wang is weighing Angus and Duke's roles, having taken the matter under submission earlier this month following a two-week trial that included testimony from Duke and Angus, as well as Judy Magney, ethics experts and character witnesses.

Missing from the witness list, however, was former county public health nurse Heather Ringwald, who was sent by APS to investigate calls made by mandated reporters about Dick Magney's condition after he was admitted to the hospital in 2015.

Much of the State Bar case — as well as Angus and Duke's defense — can be traced back to Ringwald's assessment of Dick Magney's situation, which built the foundation for the APS and Public Guardian Office's petitions, but she declined to provide information to the State Bar.

By all accounts, the 73 year old was in dire condition on arrival to the hospital, suffering from a series of life-threatening ailments — including an infected heart valve — chronic pain and desperately poor hygiene.

The Magneys had been pursuing palliative care in consultation with his doctor and in keeping with Dick Magney's advance health care directive before APS — via the county counsel's office — intervened and had him placed back on antibiotics in a bid to keep him alive while investigating a possible neglect case against his wife of 23 years.

Later, when the APS case was withdrawn, the Public Guardian's Office stepped in and obtained temporary control over Dick Magney's affairs for about a month before a judge denied the agency's request to place him in a permanent conservatorship.

The State Bar's case alleges that Angus and Duke failed to investigate Dick Magney's condition and also "willfully" withheld pertinent information about his situation in the APS and conservatorship petitions presented to the court, while what was filed contained "misleading" hearsay statements and lacked supporting documentation.

"As shown by the evidence in this case and discussed in the State Bar's closing brief, respondents used their position of power as county counsel to violate Dick Magney's fundamental rights based on intentionally misleading and deficient petitions," the State Bar argues. "And they did this to a very vulnerable person at the end of his life. Such misconduct cannot be allowed."

Angus and Duke, however, assert they not only acted with due diligence but — in the APS case — did so in what they believed to be a life-or-death situation based on the information provided to them by the agency, which they had no reason to doubt and no obligation or ability to double check.

"Other than law enforcement, APS is the only agency authorized by law to investigate reports of suspected elder abuse," attorneys for Angus and Duke state in court filings. "As attorneys in the County Counsel's Office, neither respondent had the authority much less the duty to conduct their own investigation regarding Mr. Magney. Had they attempted to do so, it would have constituted usurpation of APS' statutorily conferred function."

In closing briefs, each side used an opening quote to denote their positions on the case.

"The road to hell is paved with good intentions," the State Bar's petition begins before arguing that Angus and Duke failed to take a number of crucial steps before aiding the APS in wresting control over Dick Magney's care away from Judy Magney based on the "misguided belief that they were trying to protect him from his abusive wife."

In addition, the State Bar alleges, when presented with evidence that "their initial assumptions were incorrect — and their client deliberately concealed information from them — they did not take any action to remedy their misconduct, but instead, doubled down, compounding the misconduct."

Angus and Duke's brief, meanwhile, starts with the quote, "A person cannot be undead; there are no do-overs if you get it wrong," in presenting arguments that the county counsels "acted in a manner consistent with the very highest standards of the legal profession." The brief also asserts that the county attorneys acted on what they knew at the time and their belief that Dick Magney's life and well-being were on the line.

"The (State Bar) failed to prove by any standard, let alone by clear and convincing evidence, that Ms. Duke or Ms. Angus failed to perform with competency, (filed) the petitions without reasonable cause, sought to mislead (a) judge, or acted with moral turpitude, dishonesty or corruption," the brief states.

Angus and Duke are also asking Wang not just to exonerate them but also to dismiss the case entirely, stating they have evidence to clear their names but are legally barred from providing it to the court due to attorney-client privilege and other confidentiality requirements.

That evidence includes more than 60 emails exchanged between the county counsels, APS and the Public Guardian's Office, which Angus and Duke say would show what they knew and when they knew it, but which the board of supervisors has declined to waive its secrecy rights over and allow to be seen in the case.

Instead, the motion states, Angus and Duke have been left "to defend themselves with one hand tied behind their backs."

"Respondents are facing disciplinary charges which threaten their reputations, their unblemished careers and their ability to practice their chosen profession," the motion states. "They have a constitutional right to put on a full and complete defense to the (State Bar's) charges. The court should require nothing less."

Wang denied a similar motion made by Angus before the trial began.

In a previous interview with the Journal, David Levine, a professor at University of California Hastings College of the Law, said there's nothing to preclude the county — the ultimate holder of any attorney-client privilege in its county counsel's office — from waiving its rights.

"We're not reviewing the conduct of the entity of the county," he said. "It's a narrowly focused proceeding on whether these attorneys violated their professional obligation as licensed attorneys for the state of California."

But the county is footing the bill for Angus and Duke's defense, which, combined with seeking legal advice on the State Bar matter, is nearing the $600,000 mark.

With the exception of Fourth District Supervisor Virginia Bass, who cited the confidentiality of closed session in declining to comment, none of the other supervisors responded to Journal inquiries about the county's decision not to release Duke and Angus from the restrictions of attorney-client privilege or the board's reasoning for using taxpayer money in a situation where the county itself is not liable. Not all of the current members were seated when some of these decisions took place.

The State Bar is seeking a 90-day suspension of Angus and Duke's law licenses, with a one-year stayed suspension and one-year probation. Wang has until January to render her decision.

Kimberly Wear (she/her) is the Journal's digital editor. Reach her at 442-1400, extension 323, or kim@northcoastjournal,com. Follow her on Twitter @kimberly_wear.