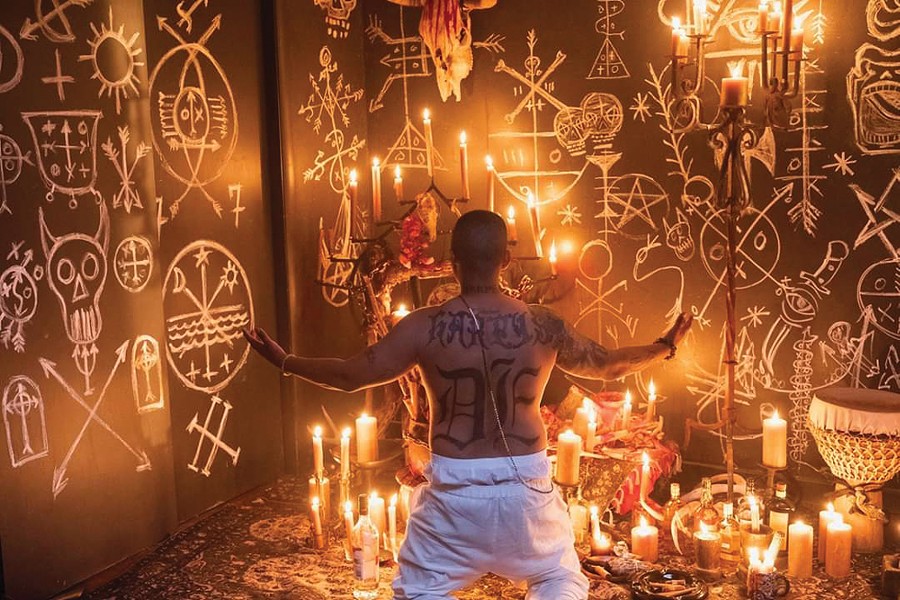 The Tax Collector On the bright side, shelter in place means some time to work on projects around the house.

THE TAX COLLECTOR. Like James Ellroy (whose work I also consume with probably unhealthy compulsion), writer/director David Ayer has spent two decades unpacking and examining the lives of men at war, to mixed degrees of success. Occasionally he'll explore a universally acknowledged conflict, a War with a capital W: U-571 (2000) and Fury (2014), which is notable on its own merits, but also marked Ayer's first collaboration with Tax Collector co-star Shia LaBeouf. But for the most part, Ayer, again like Ellroy, is obsessed with the ongoing battle between cops and criminals on the streets of Los Angeles. The two of them have even worked together, with Ayer adapting an Ellroy story for the screenplay of Dark Blue (2002), directed by Ron Shelton, and directing Street Kings (2008) from a script by Ellroy, Kurt Wimmer and Jamie Moss. Both movies have their merits and are saturated with the atmosphere and types and tropes that define both men's bodies of work, but can hardly be called high water marks for either.

And that's the thing with David Ayer: the yawning chasm between his best work and his worst. There are distinct tiers to his output, and gradations of quality and intensity to those tiers. These movies are unlikely to become landmarks of cinema or regarded as important contributions to humanity's understanding of itself. They have been and will be relegated to genre, or sub-genre, status. While I bristle at the notion of genre classification as a pejorative, I can live with the differentiation. And I would counter that in his best work Ayer collaborates with actors who can embody, if not fully elucidate, the complexities inherent in the character of frontline combatants. I'm thinking most specifically of Jake Gyllenhaal and Michael Peña in End of Watch (2012), Christian Bale and Freddy Rodriguez in Harsh Times (2005) — a contentious favorite — and the entire tank crew at the center of Fury (Brad Pitt, LaBeouf, Logan Lerman, Peña and Jon Bernthal). It's worth noting Ayer's stories, first tier or otherwise, usually focus on a duo. The Tax Collector, decidedly an "otherwise" is no exception.

David (Bobby Soto), a loving husband and father, as well as a devout Christian, works as a tax collector for the ominous Wizard (Jimmy Smits), under whose aegis all the street gangs of Los Angeles seemingly operate. They all must pay their tithe and David, alongside the murderous but unfailingly loyal Creeper (LaBeouf), see that they are paid, in full and on time. It's lucrative if unpleasant work, and Wizard's supremacy is rarely called into question. That is until Conejo (Jose Conejo Martin), demonic, anointed in blood, returns from Mexico with orders to disrupt the hierarchy. David, Creeper and their crew are immediately thrust to the front lines of a hideously violent conflict that will leave everyone irrevocably altered.

It must be said: This movie's kind of a mess. The plot, while simple enough to describe in a single sentence, comes off as somehow confusing on screen, with vital inciting incidents seemingly omitted or glossed over in service of pacing. And that pace, which I think is intended to accelerate from languid to frantic by the climax, feels rushed throughout. That being said, there are, for fans of Ayer and of the genre, aspects of The Tax Collector to recommend it. It fits somewhere in the L.A. mythology of Training Day (2001) and Harsh Times, with a couple of shared references for close-watching heads. And the atmosphere of the embattled city of Ayer's mind, particularly in the nighttime aerial photography, is both unsettling and weirdly pretty. LaBeouf does tremendous work as Creeper, despite his role becoming precipitously diminished in the truncated build-up of the second and third acts. (He and Ayer have received some public criticism for cultural appropriation regarding this role, though LaBeouf is portraying a white character.) And while some of the action would have benefitted from more time spent in the staging, there are a few moments of violence worthy of note.

In the greater scheme, The Tax Collector is minor work, to be sure. And even within the smaller scope of Ayer's catalog, it can't be said to approach the best of his work. But I admire it as an example of an artist (albeit one working in the most commercial of media) continuing to explore a setting and subject, from multiple perspectives, that can yield countless stories. It's the sort of non-comic-book world building to which I have long been drawn. And so, even a less successful example like this one feels worth the time. NR. 95M. STREAMING.