A McKinleyville couple is suing the county, claiming they're being extorted for an airport easement 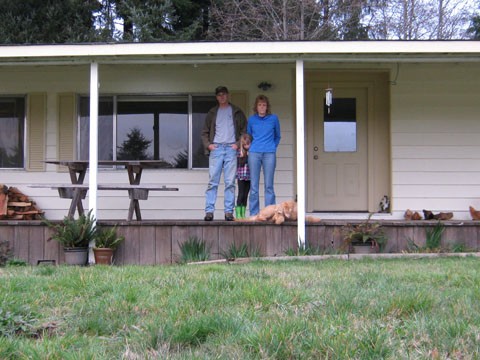 On June 8, 2004, Scott and Lynn Powell bought their first piece of property -- a humble plot of fence-lined land in Dow's Prairie, outfitted with a beige, single-wide mobile home. Near the peak of the housing bubble, this was one of the few properties in the Powells' price range. "Wasn't the best timing on my part," Scott Powell says in retrospect. But their daughter was just a few months old; they wanted a place to settle down. And they love the setting.

The lot sits near the end of Grange Road, a pretty little country lane -- just a few thousand feet long -- that runs west-to-east, starting near the "X" of the Arcata-Eureka Airport's runways, passing Dow's Prairie Elementary School and then turning to gravel before petering out amid spruce, Douglas firs and alders. The Powells' mobile home sits in the southwest corner of a grassy lot, a covered porch running the length of its front and a carport running along the back.

Shortly after buying the place, a county inspector came out to check the foundation on the mobile home. While there, he informed the Powells that the porch and carport, which had been built without a permit by the previous owner, were not up to code. They'd have to be re-engineered and approved by both the county and the state. So Scott Powell drew up some new plans, and he filed for a building permit from the county.

"One of the first things I got back in the mail was a letter saying I needed to submit to an overflight easement for an airport, basically granting the air space over my house at no charge and leaving me with no recourse," Powell told the Journal by phone Monday afternoon. Their home lies about a mile from the standard flight path. (At night, the family can look out over the prairie from their front window and watch the planes' headlights as they come in to land.) The planes don't fly overhead, and there's not much noise. Yet they were being asked to sign this waiver -- "for the use and benefit of the public," it said -- permitting takeoff and landing paths directly above their home. It would also give the county the right to "regulate or prohibit the release" of steam, dust or smoke, plus bright lights, reflective surfaces and electrical emissions from their home.

"I really didn't know what to think about it," Powell said. "I discussed it with a friend of mine, and he kinda thought it sounded like a raw deal."

The Public Works Department refused to sign off on the building permit until the waiver was signed, Powell said, and since he wasn't comfortable doing that, he didn't. He forgot about it. He went back to school to improve his job skills as a biological technician for the U.S. Park Service and "basically put the whole thing on the back burner for a couple years," he said.

In May 2008 the Powells received a certified letter from the Humboldt County Community Development Services Department saying that if they didn't remedy the zoning violations then the county could declare the additions a public nuisance. The Powells could then be charged for their removal, plus fines, or failing that, "criminal remedies" courtesy of the District Attorney, the letter said. So Powell went back to work on the project, collaborating amicably with the enforcement officer and others in the building department, he said. But he soon came upon the same roadblock he'd hit years earlier.

After submitting a new application for a building permit last year, the Powells received another copy of the overflight easement, along with a demand that it be signed. This time, on the advice of a friend, they contacted the Pacific Legal Foundation, a Sacramento-based nonprofit that specializes in fighting for limited government and individual property rights. On Jan. 12, the PLF filed a lawsuit against the county accusing them of "holding the Powells' permit application hostage" in violation of both state and federal law -- in particular, the U.S. Constitution's Fifth Amendment clause governing eminent domain.

PLF attorney Luke Wake said the county's actions almost qualify as extortion. "They're trying to use the permitting process to coerce someone into giving something that, if they want, they ought to be paying for," Wake told the Journal in a phone interview Monday. Because the county has the power of eminent domain, he said, they have a right to simply take the airspace above homes in the vicinity of the airport, provided they justly compensate the homeowners. Instead, they've tied the easements to permitting processes that are completely unrelated. Wake admitted that the easements themselves are probably a good idea; they'll allow the county to expand the airport and facilitate larger -- and more -- commercial flights in the future. "I don't know why they're just now getting around to trying to acquire those easements, but the point is they're going about it in the wrong way," Wake said.

County Counsel Wendy Chaitin said her office received a copy of the complaint last Friday but that the county cannot comment on the case at this time.

Scott Powell said he just doesn't want to get burned. "This is my biggest investment," he said. If the county wants him so sign away his rights, he figures they must be anticipating some sort of harm, some future damage either to his property value or his comfort of life. "Otherwise, why would they even require an easement?" he asked.